https://www.youtube.com/watch?v=zjKFM22Qsxw
Pyrrha's only objective is to make you do something stupid so she can shank your ass.
Again - Ramon, not you. Your poking seemed to have some objective, his didn't.
you use 1K as a pressure tool against pyrrha to make them want to duck to set up Maxi's hard mids
I never said anything about strings. The 1Ks seemed to lead to 1/4Ks.
Zanaken, welcome to Maxi vs Pyrrha. The bitch totally rapes him if he tries any of that flashy string shit you seem to want to see so bad. 1K is about his safest option to score a hit. Those 1Ks set up other shit.

Anyway, great shit as always, IRM!
It's cool, KokoYoshi, I guess that's the only way to look at it. This vid just wasn't for me.
he stole that maxi custom from me
I don't know what all that excess banter bellow me is about, but all I know is I saw some great matches. Nice execution and anticipation from both players, and a cool looking custom Maxi too. Liked~
Cool. Playing since SB makes one a godly expert on high level play? See that IRM? Proof of my utter superiority. IAB said so.
Lol, Kokoyoshi, go sit down.
All this "they should do more than pokes" and "they should of played like this" just screams TV basketball talk. Talk is cheap and proving yourself is quite expensive. I mean that's all I got from Zanaken and IAB....though the latter is like a stalking girlfriend to IRM.

I mean every damn time, "IRM, stop ducking me." Maybe IRM should just shut up IAB and play him in a FT5. Since the only thing I'm gonna see IAB as is a stalking girlfriend who got tricked into a one night stand with IRM.

Then you get common people like Zanaken with confidence to beat Ramon and IRM. Admirable, but again talk is cheap. If he does beat them, props. However, he has to do it consistently and make the right reads every time like a robot. Something I'm confident he won't always be doing. Regardless, I love to be proven wrong just like the other TV basketball players who come out with silly logic like Zanaken.

Pardon this blatant post.
Om nom nom.
This is fucking cancer. Good set, Ramon should pressure more and not block as much. IMO he isn't forcing you to do dumb shit because you look fairly composed.
lol
God is doing a new thang
The color types don't make any effing sense to me. I'm the Pro Scrub. I'm a know-it-all.
The blue, green, or pink kind, IAB?
indeed :)
"Higher" level play is even worse as it has no reference point. Higher than "what" level becomes the question after such a statement. And "higher" wouldn't tell you just how "high" it is. It could be that "higher" is actually quite low. But I don't care to belabor the point over semantics. Inducing a whiff is still pretty basic. You want to either parry your opponent's attacks or dodge them (a whiff). Depending on the stepping being done, the induced whiff can be more complex than the average. But just making someone whiff isn't. Anyone can 1K > backstep > 3B with Nightmare. It doesn't take any sort of skill. Whiff-confirming after a step and then reacting fast enough to punish, however, takes a little more skill. Not that it matters, but I've been playing since SC2, which isn't that impressive. I know people who have been playing since Soul Blade. Lol. But hey, not like what I say matters. I'm just a scrub.
Bears repeating that this is pretty much Ramon right here: http://i47.tinypic.com/4kyxxf.jpg 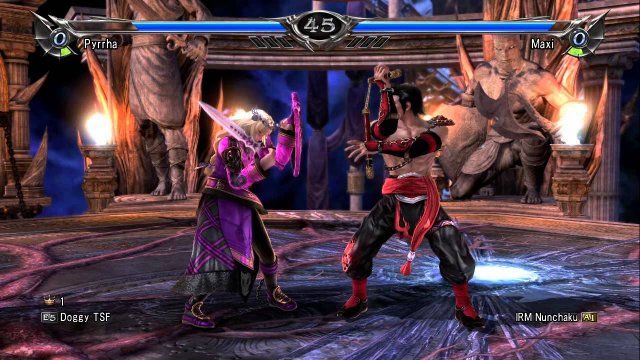