https://www.youtube.com/watch?v=0DXcTSCpcck
I'm soooorrrry! I'm trying to get better XD
Aww man, you can't let Viola walk all over the Great Knight like that! I won't have it.
Nerf Sieg? Dear God, why would you say that!? Don't give Namco ideas XD Nice video, though. Gives me a better idea of how to face an average-ish Viola with my Sieg. She's always one of the ones that gives me the most trouble as him.
You're all a bunch of cunts.
agreed. i had no idea my opinion would outrage so many.
I second most of what Slayer said. I've been shocked by the ensuing arguments. Just have fun, if you can, viewing the video. The description part was merely humor.
I have make a teste in training mode to kill 3B mix up you can make 33B or 11K . 33B is little difficulte in match but you have a big combo with . 33B 66B 2B+KBe Dash AAB 66B 66A+B who make 127 damages is good no ? Of cours you can make more with Be and viola deaht Combo . If he cancel you are safe so the choice is easy . Use more training mode .
MKHSpartan Normaly I am new .
I think in this match up viola have an advantage .
hAppY: "Sieg don't need a tweak if you don't take a good choice all charachter was very strong .66A is a slow high bad move 4B+K BBB can be step and punish . Siegfried is a zoner if you don't know how to break his zoning you must work this or change character but the probleme is not Mu it is the knowledge ."

Now lets try not to get too serious here. Certainly these Viola players arent great, but its just a couple of online videos. I personally feel the videos have no matchup value other than from the perspective of viola players for "how not to play viola", but perhaps these matches could be analyzed and used for study of their anti-siegfried matchup if they so choose.

However at least IMO this video wasnt put here with malicious intentions - I think IAB was just trying to crack a joke here here, and it just ended up being taken waaay too seriously on all sides(siegfried players and non-siegfried players alike.) Personally I think this is evident by the giant skill gap between the Siegfried player and the opposing Viola's. Nerf/Buff/Defend Siegfried arguments just simply dont belong here.

Really what I think we should all do is just take this for what it is at face value, which is a source of entertainment. If Siegfried players(myself included) want to have real MU footage they can analyze, they will just have to look somewhere else.

If either side doesnt agree with this, they can take it up with me in PM's. There's no reason to have bad blood with this video because it will only spark more malice, more flaming, and more bad rep for not just siegfried players but all of us invlolved. Lets just leave it be.
88A is a slow, safe mid horizontal (which can often be tech-crouched, go figure lolz).
66A is an absolutely useless move, if you or your opponents can't duck this on reaction, you really need to get better reflexes.
iagA. Yes, this is a great move, it does have some room for execution error to sort of compensate for how good the move is. Still, I would put it in his top 3 moves.
SSH BBB??? This move (and stance) are almost fucking useless, all 3 hits are -18 on block and you can just step the second hit on reaction and most characters can punish it for about half life, not sure what you think needs to be nerfed about this move. It would be better if SSH actually had a decent backstep and SSH BBB didn't step back forwards into attacks.

Happy, I haven't seen you before, but I agree with your post there.

G-unit - I don't know what Viola has in the way of moves with step +tech-crouch, but if she has any good moves with both those properties, they are often excellent tools for breaking through Sieg's zoning game as most of his horizontals are are high and the ones that aren't usually only kill step to one side, the exceptions being 22A and wrAA, of which 22A often gets TCed anyway (ugh....) and wr AA is very unsafe but at least you can try CH confirm it and if not cancel it, however it is still rather risky.

im not saying Sieg is too easy or that he needs to be severely nerfed. i just think he can use a tweak or two.
Start to punish siegfried move for exemple at 1min09 or 2min 44 !
Stop whiff and use many high !
Stop use A A B, B B B the last move was high and can be punish by big damage .
Don't take au false combo 3BB at the 2,35 min . Use dash guard . Try juste guard to punish whith 44ABe or 3B .Seek viola option on the 3B SCH stance of sieg .More combo was drop you lost many degats .
The moste problème is the knowledge I think .
Wait 3 or 4 Sieg horizontals??? Shit, the only one I can think of people finding good is iagA, what other ones are you thinking of?
oh geez what have i done?

now looking back, the only reason why i said such a bold statement was because i just recently have gained enough skill with Sieg to win a vast majority of my online games. maybe im psyching myself out but i think im winning too easily.

im not saying he needs a speed nerf or damage nerf from an inexperienced point of view. i took the time to learn him and thats my honest opinion. OPINION.

im completely out of my element with his style yet have better matchups sometimes due to him having better tools, tools that i think should be nerfed. three or four of his horizontals specifically, you guys act like i want all of his moves nerfed.

i main Voldo, Raph and Tira and horizontals are the devil.
All but the characters I play need nerfing.
The whole reason I started commenting was because Goose said he thought Siegfried needed a SPEED NERF. A speed nerf, for the second slowest guy in the game? Just what.....
I appreciate the honesty. Also, I'm sorry if you expected more from the video. Try not to waste your time by being too critical of something as shallow as this.
Well, I only watched the first game, and honestly, yes, I thought he sucked. I think even I could play Viola better on fundamentals alone, I haven't watched the matches afterwards. Also I didn't mean high level tournament players (well, if you can that would be good), but just solid online players with those characters. There would be people in the Soul Arenas probably willing to do it. 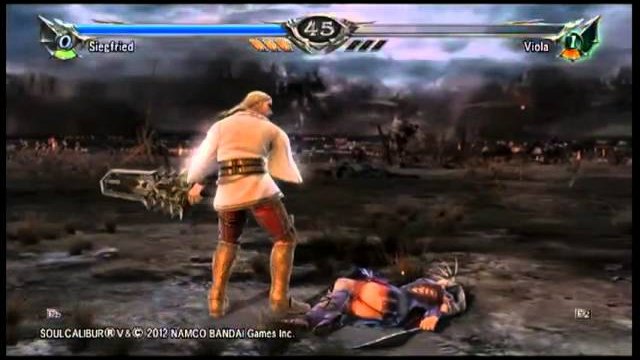