https://www.youtube.com/watch?v=XipvBst64Bk
I always wanted to do the Astaroth "Infinite Poke Vortex".
Just finished the download and I gotta say, this is a *huge* step forward from the limited camera the game provides. I look forward to seeing what you can do with this. 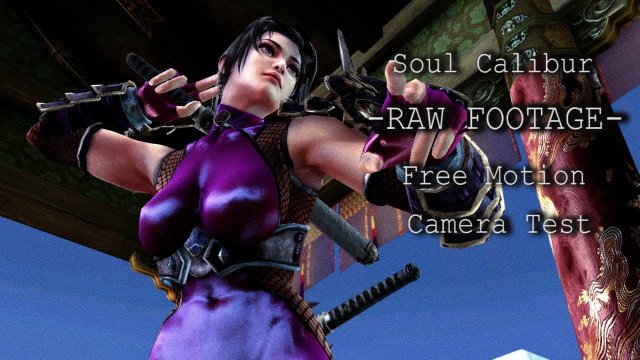 Mar 9, 2014 at 10:15 AM
Posted by skytoast
Here's something new you don't see everyday. In fact, I'm pretty sure none of you have ever seen Soul Calibur in this way.

This short demo reel is a compilation of several short test clips to demonstrates the results of some recent "tweaking" that re-hauls the in-game replay camera system. It allows the in-game camera to be controlled in ways previously not possible. This is just another experiment in pursuit of finding additional techniques and "tools" to help me make fan-made films based on Soul Calibur. This probably has no real use in actual game play but it's definitely cool to look at.

Through some technical feat which I wont go into details here, the in-game camera, whether its the replay cam, the actual battle cam or even the CAS cam, the camera can now be moved about within 3D space with much more freedom, precision and less restriction along the x-y-z axis than ever before. This allows for new perspectives and focus shots from camera angles previously not seen thus allowing further different vantage points for creative opportunities when "filming" or capturing footage from the game. It is now possible to get camera shots that dolly, zoom, truck, pan, tilt, roll, pedestal with almost no limits thus allowing high angle, low angle, bird's eye (top-down) views, wide angle establishing shots, super-wide extreme shots, intimate close ups and super close-ups to name a few. (It could probably be used to explore parts of stages map you probably never knew even existed).

Anyhow, this film features a small collection of short vignettes taken from some simple casual capture sessions, showcasing as "proof of concept", various ways in which this new camera function could be put to use. It's pretty much "raw footage" here captured but edited and compiled together in Premiere. There was absolutely no compositing or FX trickery (i.e. green screen or rotoscoping) done here to achieve these camera shots. After Effects was only used to perform color correction and film grading to give it a more "film-like" effect. This only hints at the possibilities. You can imagine if coupled with some additional FX work such as dramatic lighting, reflective lens flares, and perhaps some optical depth of field, the film like effect would look even better.

This is still a work in progress (but what's found so far is some major significant progress). There's still a few things that I would like see solved (such as the camera's positional reset between replay loops like in SC5). However, needless to say, I can only describe this new found freedom as "epic". I have been looking for a way to freely control the camera within the game for quite some time now. Alas, after all this time, I guess you can say I have found my "holy grail"!

Again for anyone interested, I'm providing a direct download link to a much higher quality h264 version of this video which is closer in quality to the original master in 1080p. Be forewarned, it's pretty big file.
Enjoy!