ElegantRaven said:
At the end of the day this is a fighting game above all else and while they are undeniably putting more effort into the story side of things than ever before (don't get me wrong: the story still isn't good or necessarily well-handled, but it's obvious there is more effort here), popularity of characters and diversity in roster will still always take precedence over a roster dictated by story and lore.
Click to expand...

Exactly, that's pretty much the very reason that 2B is even allowed to exist in SC in the first place. I found it rather amusing, how they were attempting to have her appearance collide with Ivy's journey to make it somewhat plausible and acceptable lore-wise. Yet most people, who wanted to have this big internet phenomenon that is 2B to be part of this franchise, couldn't have cared less for this very shallow premise. Hell Geralt sneaked his way into the game through a portal. If they plan on making VI the ultimate SC experience that could make any appearance possible regardless of lore accuracy, then by all means, deliver it namco.

@Rusted Blade At the end of the day, it’s all relative to your personal perspective, I think. I’m not enforcing the canon inclusiveness rule on the roster, Namco is. It’s just a fact that the games up to this point have already done this, even without the cohesive story narrative design vision. Having the enhanced focus on story just makes it harder to believe they would break tradition, is all I’m saying.

For a different angle, consider Tekken. Tekken has a lot more characters than SoulCalibur does, and also has character evolutions and replacements over time, and in the main series, they don’t include everyone, only the most recent incarnation or variant of specific characters. Compare the Tekken Tag games, where they just throw everyone in without regards to storyline or contradiction, that’s how I see it when it’s suggested that everyone is included without regards to continuity.

If we had a SoulCalibur Tag game, it would be more than believable and acceptable to include things such as both Amy and Viola, assuming they’re one in the same, assuming it’s a one-way transition. They could also include all variants of Aeon/Lizardmen, Nightmare, the kids from SoulCalibur V, Night Terror, Scuba Diver, Necrid, and anyone else they wanted, because it wouldn’t matter. It’s just a game for fun and nothing else. But a main series game, which is driven by the story, would only include characters who move that story along. I’m not sure where the misunderstanding is, truthfully. It’s just the way that Namco does things and it’s always been that way for both SoulCalibur and Tekken.

Should I hope for this game on Switch? Or is useless?

The Switch was announced when the game was still a work in progress, and they stated they didn't know about the console's existance during that time. That means that, if it is to happen, it would not be immediatly.

the real question is, is there enough demand on switch for Banco to make profit on sales if SC goes on Switch?

genghis_chan said:
the real question is, is there enough demand on switch for Banco to make profit on sales if SC goes on Switch?
Click to expand...

You have me, the fan number one of SC

But you´re right, it´s just MK11 is coming for it, feels like SC6 and DoA6 could do it too. I have SC6 already for PS4, but since I have a Switch, it would be awesome to play it there too.

Lang said:
You have me, the fan number one of SC

But you´re right, it´s just MK11 is coming for it, feels like SC6 and DoA6 could do it too. I have SC6 already for PS4, but since I have a Switch, it would be awesome to play it there too.
Click to expand...

They may do it sometime down the line (perhaps in a year or two) but I wouldn’t get my hopes up on that so soon.

The only reason I can think of anyone wanting SCVI on Switch (besides having more fighting games on the platform) is so Namco will throw in a console exclusive Nintendo guest on said platform (probably from Fire Emblem).

Realistically, I'm afraid so there's not much chance. Even for a Nintendo console, the Switch has seen a very low amount of third-party support, especially in terms of big titles. Nintendo just hasn't courted those IPs, being content (and indeed eager) to prioritize a glut for first-party content that is doing quite well and plays to its own core audience that has kept it inexplicably a hardware manufacturer (when many industry analysts thought they would eventually transition towards being a mostly software company with time). This is a problem for Namco, who would need significant prodding and incentive to even begin thinking about doing something along these lines, given the Switch's small install base for the "hardcore gamer" (industry term, not mine) who is likely to buy a game like Soul Calibur, and the fact that a port to the Switch would not be cheap (well done ports are never exactly cheap and here it is particularly problematic in that 1) the Switch is not really optimized for the graphical demands of the game, meaning significant work to balance performance against fidelity on generally graphically weaker hardware, and 2) the switch also uses completely different CPU and GPU cores from the family of chips used in common by the One and PS4 for which the current SCVI build is made, meaning possible performance and bug issues that have to be resolved--issues that are accepted to some degree by the PC players trying to get the game optimized on their various forms of hardware will not be tolerated by the console consumer, the press or even the console maker themselves, to the same extent) and it would also necessarily divert human resources that are presently (and probably for most of the next year) stretched thin as it is providing ongoing support for titles, while getting shit about their pace of production and "soon" memes from the likes of us. ;)

Long story-short, no I don't think it's in the cards. But, I will give this little note of encouragement. It's looking likely that the industry, in the next generation, is going to embrace multiplatform and inter-network play (probably through universal virtualization of some sort, maybe even with subscription services that you can load on multiple consoles). Traditional consoles themselves will only be a part of the network for the games too--there will also be streaming devices (though obviously with fighters, the latency issues will keep our communities rooted in hardware that runs the game locally, at least at first, until some years have passed and the kinks have been worked out of those systems). What that will mean for Nintendo, marching to the beat of their own drummer (and usually finding a way to make that viable longterm, despite huge ups and downs), is hard to say, but if they launch one of their consoles that is kinda quirky in the UI but basically a traditional device in an under-the-hood sense, in the next generation, I'd say they are going to be facing pressure even they can't ignore--if from nobody else, then the players, who will make their mind known on such issues and here, I don't think it's "No, I don't want to play PUBG/Fortnight/APEX, or Tomb Raider, or GTAVII, or Bunigie's new game [ominous one word title], on my new Nintendo Qoodro." But for VI, I'm afraid the picture isn't encouraging for you, if that's your only system or you have some reason for wanting it on that system in particular.
Last edited: Mar 16, 2019

Just four more days until we see Amy in action and get confirmation on the date. Man, the wait is killing me.

Here's a few new Amy screenshots. Sadly their resolution is quite low. 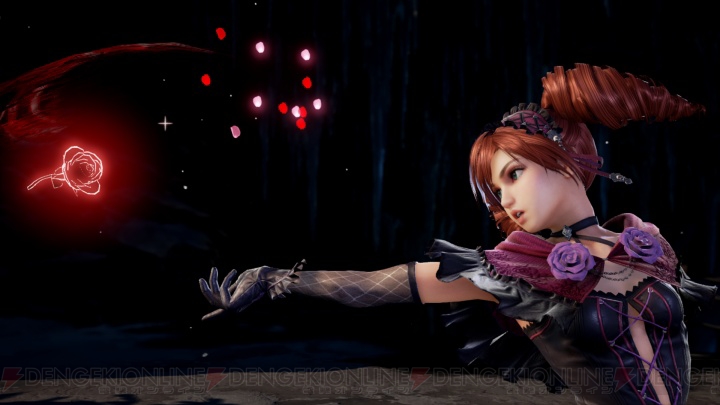 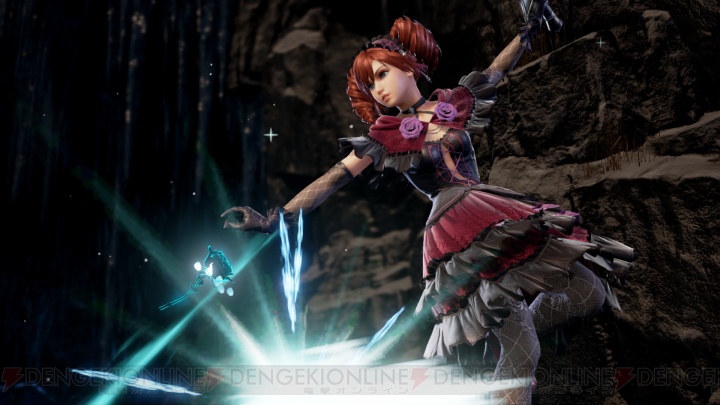 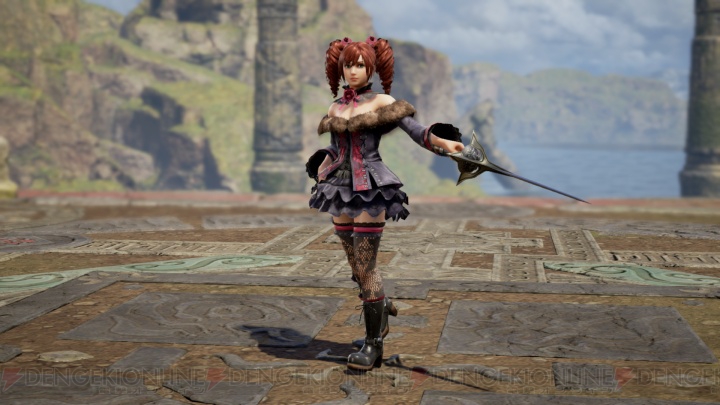 It's not exactly IV's, but I think it probably will be its own hairstyle in this game because it has the two roses in her hair.

Umbra4life said:
It's not exactly IV's, but I think it probably will be its own hairstyle in this game because it has the two roses in her hair.
Click to expand...

I'm pretty sure those are just the extra equipment flowers. Hard to tell with the low resolution, but they pass for roses. The hair looks the same.

It's her SCIV hair: her SCVI hair has the headband with it (not an accessory) iirc ^^

Wait did i miss something or what? there are 2 Asta in FR Top 8 did he get buff in last patch or it's just that people starting to realize his potential? Or maybe both?

Nyte said:
Just four more days until we see Amy in action and get confirmation on the date. Man, the wait is killing me.
Click to expand...

And hopefully we’ll get the patch notes leading up to the Amy update. Though that may come two to three days before her arrival.

SSfox said:
Wait did i miss something or what? there are 2 Asta in FR Top 8 did he get buff in last patch or it's just that people starting to realize his potential? Or maybe both?
Click to expand...

He did during the last character patch. They mainly fixed his whiffing issues that plagued him at launch and decreased the startup on his 4A and RE. He’s now significantly better than before, but he still needs to play on consistent hard reads.

JohnMcKee said:
It's her SCIV hair: her SCVI hair has the headband with it (not an accessory) iirc ^^
Click to expand...

Nope, it's her SCVI hair. Her SCIV hair has exaggeratedly large twin tails. I much prefer the more realistic twintails in her new design. Porting her IV hair would be pointless, since updating hair is trickier than outfits (due to the textures) and we're already getting a twintail style with Amy. The headband on her new hair is in fact an accessory. Why wouldn't it be in the first place? SCVI has yet to do something stupid like they did with Pyrrha's hair in V.

Top 8 of SCVI @ Final Round will be starting soon, on a different stream from yesterday.

Those matches are gorgeous.