FluffyQuack said:
I think those are included in the big artwork dump I linked to a while back. I linked it in this thread, but I can't remember which page it was. It was 2-3 weeks ago I think.
Click to expand...

Sorry I'm the worst, but in the artwork gallery file the DLC isn't in there, so neither is Amy's :(

Ninjaguy446 said:
Sorry I'm the worst, but in the artwork gallery file the DLC isn't in there, so neither is Amy's :(
Click to expand...

My guess on the timeline for the first half of Season 2:

Ninjaguy446 said:
Sorry I'm the worst, but in the artwork gallery file the DLC isn't in there, so neither is Amy's :(
Click to expand... That should have DLC illustrations.

I think he means artworks from Museum

masterROBOMAN said:
I think he means artworks from Museum
Click to expand...

Do the DLC characters have new artwork added to the museum?

FluffyQuack said:
Do the DLC characters have new artwork added to the museum?
Click to expand...

There's the story artwork from Soul Chronicle, if that's what's being asked for?

DanteSC3 said:
There's the story artwork from Soul Chronicle, if that's what's being asked for?
Click to expand...

That artwork should be in the archive I linked to. The DLC artwork I found were character select artwork, story portraits, and the story illustrations.

The only other art would be like this type but in the highest resolution and also just the backing emblem like has been released for other characters.

FluffyQuack said:
Do the DLC characters have new artwork added to the museum?
Click to expand...

Oh wow, I never knew those were added. I can try to dig those up later, but I'm pretty sure the resolution of them are super low.

To give an example of what gallery art is missing when it comes to the DLC characters it will be in a similar vain as these. There's definitely stuff missing for Amy and Cassandra but I don't know if there is any for 2B.

DanteSC3 said:
So actually having a look at the SteamDB items, do you think the new entry could be a premature confirmation of a season 3? It's totally offset, the AppID:

The DLC7-DLC14 will probably be jumbled up, looking at the first season pass, but there's definitely enough slots for it. If it was, for whatever reason, some kind of extra free bonus, it's maybe a little odd that the number is after the season pass numbers, though if it wasn't planned, and a surprise just added, it could still be whatever. It's probably not related to the second season pass, though, if the numbers amount to anything.
Click to expand...

I find it hard to believe that's for a Season 3. Mainly because they haven't even finished making Season 2 yet. Remember, it was only made after SCVI's success. I'm sure they have all of S2 planned, but they still have to program everything and test it all out.

My biggest hope? A good schedule with clear communication.

I wonder if Salia was left on the cutting room floor during development. But if they were ever to add her into the game I would like to see her take up a moveset that was based off of Chloe Valens from Tales of Legendia. And I just want her hairstyle.

How would you feel if they threw in Lizardman as a free bonus DLC character, like Shizumaru Hisame in Samurai Shodown? That would be pretty cool.

Nyte said:
How would you feel if they threw in Lizardman as a free bonus DLC character, like Shizumaru Hisame in Samurai Shodown? That would be pretty cool.
Click to expand...

I think quite a few have been hoping for that since his fighting style is already in the game.

A couple of pages ago we talked a bit about the SoulCalibur Legends artwork, which is only available in low resolution.

Here's an example of that artwork: 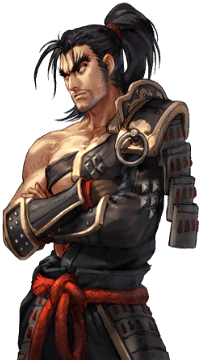 It's low resolution and it has a low colour depth (less than 256 colours). Can this be fixed!? Yes! With our good old friend, Skynet! He's also known as ESRGAN, which stands for Enhanced Super-Resolution Generative Adversarial Networks. It's a program for upscaling pictures using models created from AI-learning so it has a good idea of how everything should look at a higher resolution.

So, first of all, I used a model called "dedither" to increase the colour depth, and then I used a model created called "cartoon" (as you can guess, it's made by using images from cartoons) to upscale the image.

Wow it's so tiny! Okay, you need to click to view the full version as it's actually huuuge.

A little bit blurry when viewed at full resolution, but it does an okay job to upscale it. But can it be even better!?!?!

I've wanted to learn how to train models for ESRGAN, so I did just that. I collected a bunch of high-resolution artwork (from SC2, 3, 4, and 5) made by Kawano (the lead illustrator for SC since SC2) and started training a model using that data. After 48 hours of training (yes, it's a very slow process, and you can let it keep training as long as you want, the longer the better the end result), I figured it was about time to test the capabilities of the model.

Aaaand it looks... okay-ish? Maybe slightly better than the other model? Okay, the result of this wasn't as groundbreaking as I had hoped. I think one problem is that I trained the model using official character illustrations which has this sketch-like quality when you see it at high resolution, but I think the in-game Legends artwork is supposed to look very clean and very smooth.

But!! It turns out the model works amazingly well for upscaling some other artwork. Here's some SC2 and SC3 artwork from the SC6 gallery (which is only available in low resolution in the game itself, and finding high-resolution artwork from these games is extremely hard in general):

For reference, here are the same images in the resolution they were upscaled from:

All of those I think ended up looking extremely good. You might think the SC2 artwork looks a bit weird with its blurry details but super sharp edges, but that's actually how it's supposed to look at high resolution. Here's an example of SC2 artwork at high resolution (not upscaled. this is a promotional asset released for SC2 back in the day):

And for the sake of reference, here's one high-resolution image from SC3 (again, this is official promotional artwork which is available at high resolution):

Right now the model gets skin colour a bit wrong now and then (it's very obvious in the SC3 Cassandra picture), so I think I'll let the training run a bit longer to see if it can improve colour accuracy, but otherwise, I think the model is as good as it will get.

I don't really have a proper end goal in mind with this, but I guess I could upload random SC artwork upscaled from the SC6 gallery if people want it.
Last edited: Sep 21, 2019

Crash X said:
I think quite a few have been hoping for that since his fighting style is already in the game.
Click to expand...

I'd be surprised to see any character with their own style ever given away as a freebie, regardless of whether the foundation for their moveset was already complete at the point of the main game's launch. If we're getting Lizardman as a playable, fully developed character, I'd say its almost certainly in a season pass.

But, to answer Nyte's question, I'd be pretty psyched about it: things like that buy a lot of fan loyalty, I feel, but given the budget and development constraints this game labours under, I very much doubt PS can get Namco to greenlight anything beyond what they are already doing (the occasional free CaS item, possibly the new stages, and who knows, maybe Edge Master as a mimic at some point) as a freebie. Contrary to the assessment that "the game clearly is selling really well, since they authorized a second season pass", I don't think we can really be certain of this. Namco made some vague statements back in the first quarter suggesting that the game was selling well (relative to whatever metric they were using/pre-release target projection they were aiming for), but the company has a vested interest in playing up its level of satisfaction with sales. The reality is that the best data we have suggests the game's lifetime sales will probably not much exceed SCV's 1.5 million.

All of that considered, one might well ask "Well, isn't the second season itself an indication that the sales, lackluster as they might be compared against the more successful fighters, are at least sufficient (relative to the game's budget) to justify further investment?" And I think the answer to that question is yes and no. I think the real motivation here is that Namco is now seizing every opportunity it can get to normalize season passes as the status quo for its fighters--this has long been an objective of developers and publishers (particularly in the fighting genre) who do not have enough market share to offset the spiraling costs of production relative to a fixed cost for the base game, but consumers have pushed back against it (sometimes for good cause, but more frequently from a poorly reasoned sense of entitlement, and to their own detriment, imo). Now Namco (and other devs) see their moment and really want to set up this new continuing support purchase model, so that they can start making their fighters as big as they used to be (or indeed, bigger) while being able to scale the price they ask for all of that content.

So it would probably make sense for Namco to support a second and third season for Soulcalibur even with it's at-best-moderate sales, just to give more push to establishing this as the new standard content model. But on top of that, there's also the fact that they can actually make a potentially much larger profit--relative to the amount of work/resources put into the amount of content--from DLC than they do from the base game (though it depends on their meeting a certain sales threshold). So there's that too. But I don't think sales have been so stellar on any element of the game that they are likely to just start giving away full characters, with complete movesets: such content represents a substantial commitment of resources in a 3D fighter, and I don't see them given that away. I still hold out hope for Edge Master as a freebie, however. Surely someone on the team must have floated the idea at some point in the last two and half years.