My shot at KOS-MOS for the current @Quinion Namco challenge!
Too bad i had to use 2 items on the head piece, will have liked to make her double cannon lol 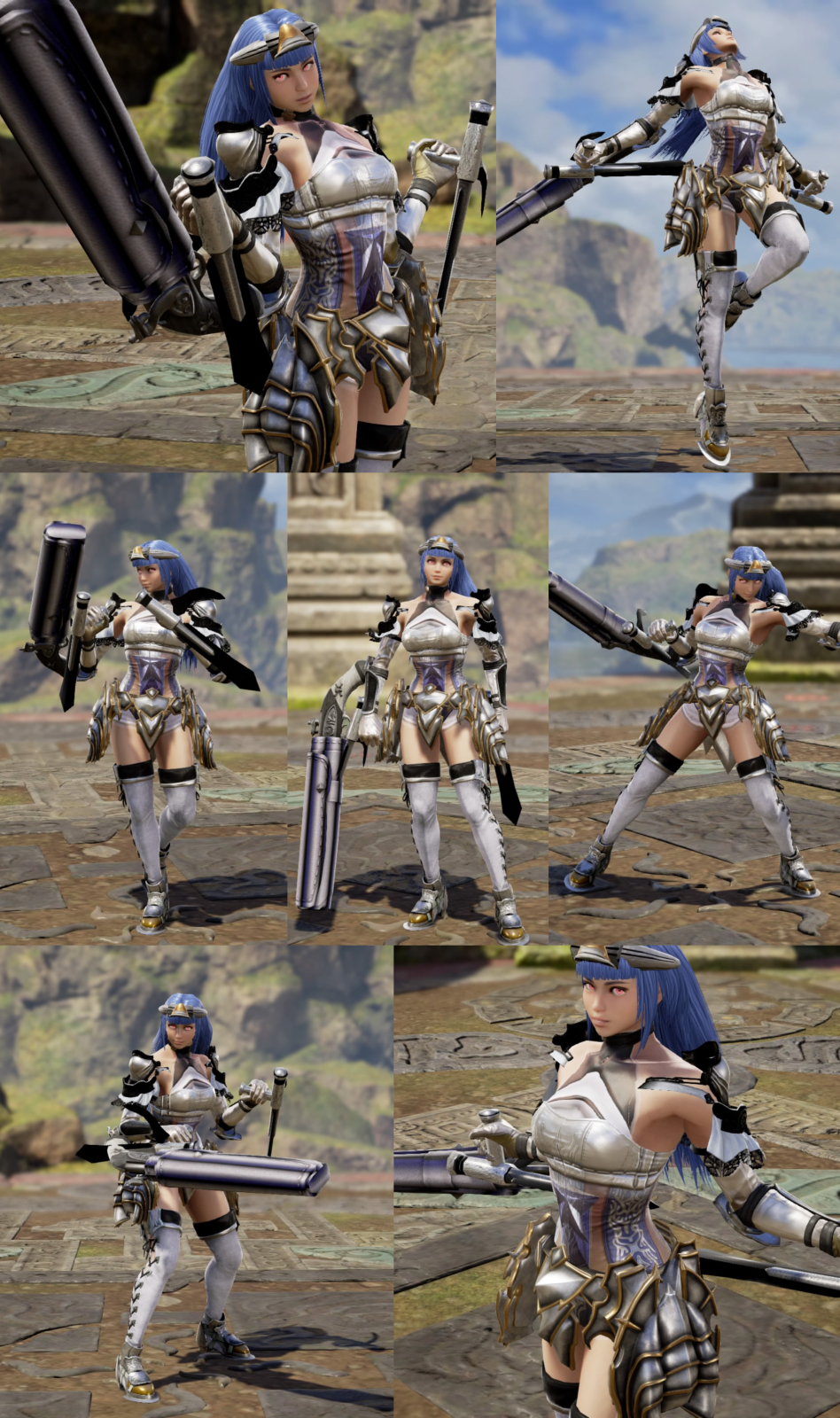 I am curious as to how your old creation The Collector came out because I have a similar idea.

And that is an awesome KOS-MOS! That actually improves upon the version found in Soul Calibur 3. I did not think that is possible. I have got to have the formula.

1- Can you reupload a picture of your Collector?

2- I am working on my own take on KOS-MOS using Zasalamel as a base, the Pure Ring as Type X Head Gear, and more White Knight armor. 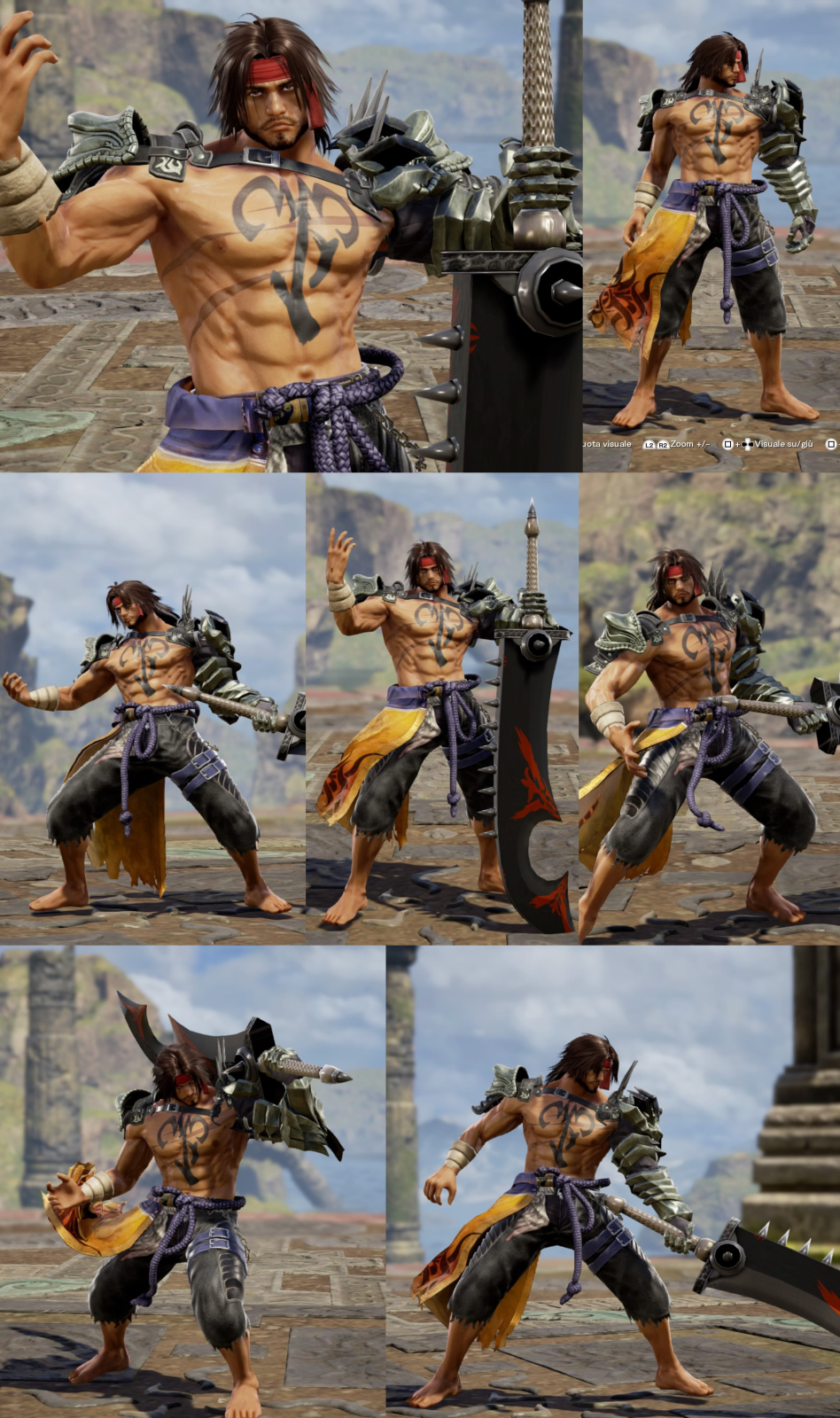 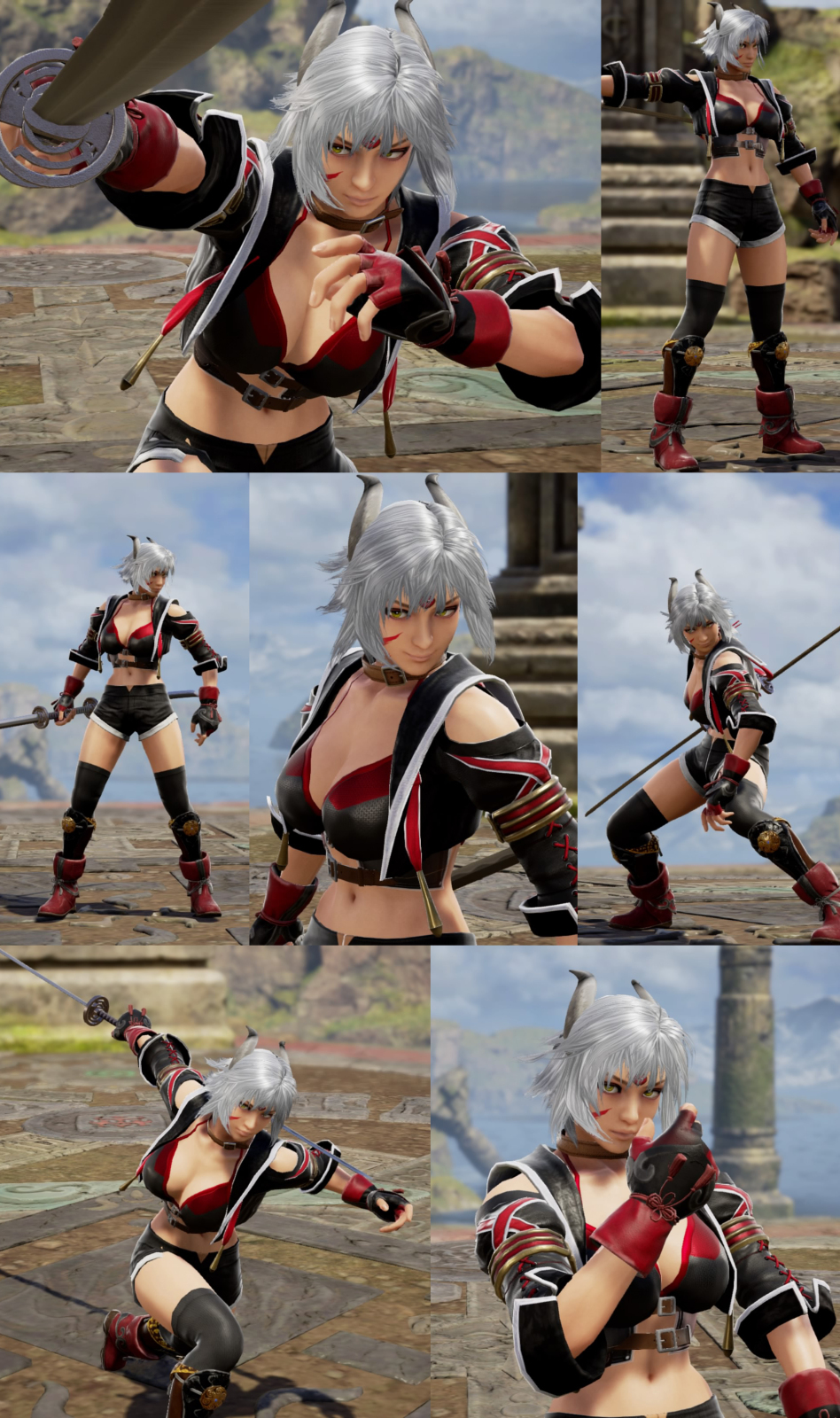 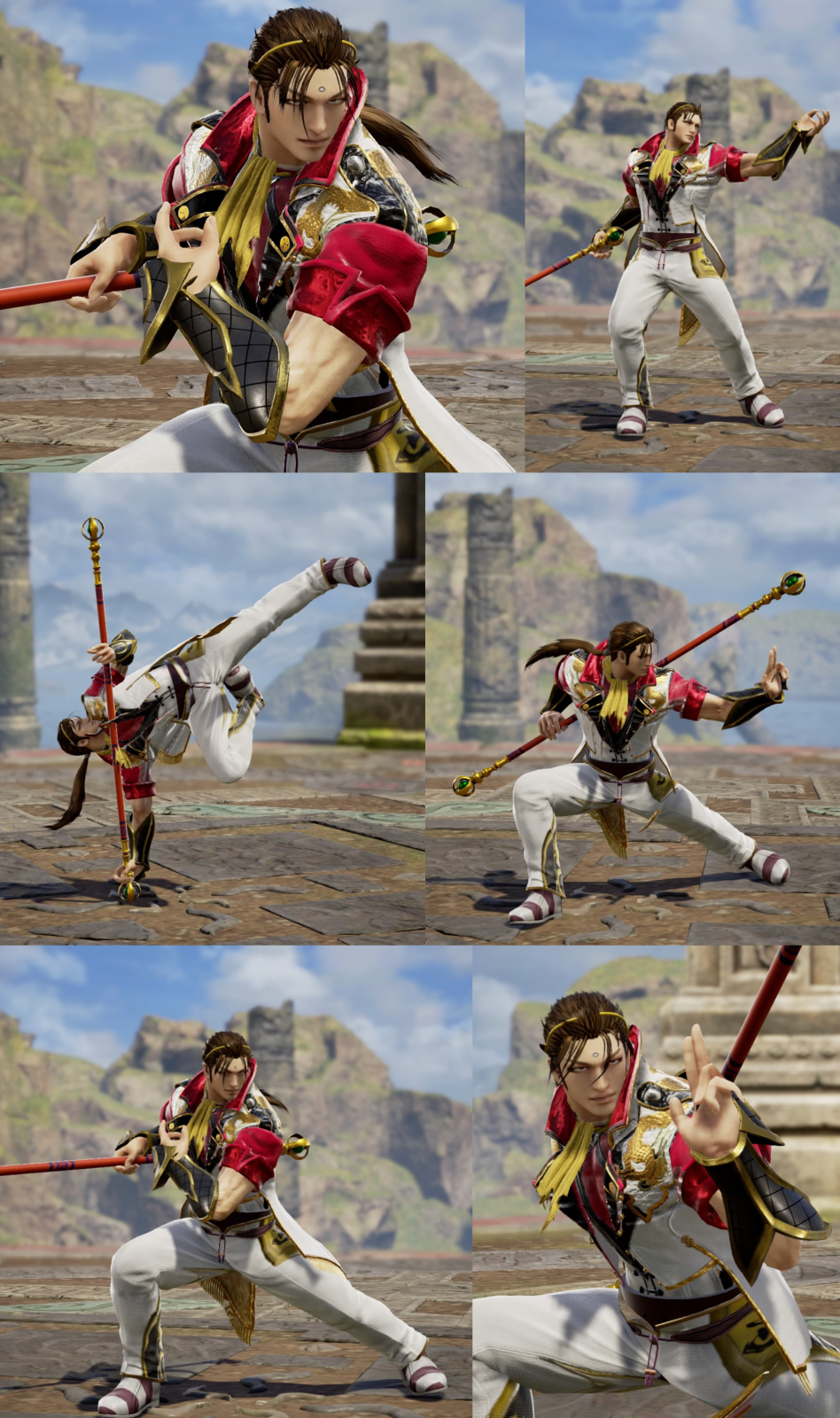 Great job!! Especially on that Jecht!

@BestFightGames no idea where i can find it, probably on the old pc in some group of sketches. I may give it a try this week, eventually i post it

@Umbra4life fun we got FFX stuff at same time (specially thinking it's not even my fav FF). Was going to do a Kimari using the beast guy i posted a page ago, but no-hair for that race fucked my plan(i seen yours i like it). I got an Auron half done but i'm away for the weekend, so will finish it monday i guess. Got a couple more FF ones too, but i want to keep it a surprise :D

@Umbra4life fun we got FFX stuff at same time (specially thinking it's not even my fav FF). Was going to do a Kimari using the beast guy i posted a page ago, but no-hair for that race fucked my plan(i seen yours i like it). I got an Auron half done but i'm away for the weekend, so will finish it monday i guess. Got a couple more FF ones too, but i want to keep it a surprise :D
Click to expand...

Haha, yes, that was kinda crazy. And please keep the pleasant surprises coming!! They're always great!

What is your favorite FF btw?

Oh boy, that Jecht is rad, the attention to detail is stunning! I'm sorry i can't say more, jaw dropped on the floor :P
Also, are Tenzai and Saya your entries for the Namco one-shot contest? If so, they're damn accurate and good-looking, great work :D

@Umbra4life as game FF8 surely had a special place for me, but i liked a lot also the art of 9,12,14,10 and Tactics. FF7 was very good too, but not so crazy higher than others chapters imho

@Ardent yes they were for the contest... happy for Kogoro result, less for Saya

AURON (FFX) - Too bad they robbed us of the sake bottle, had to use an apple lol 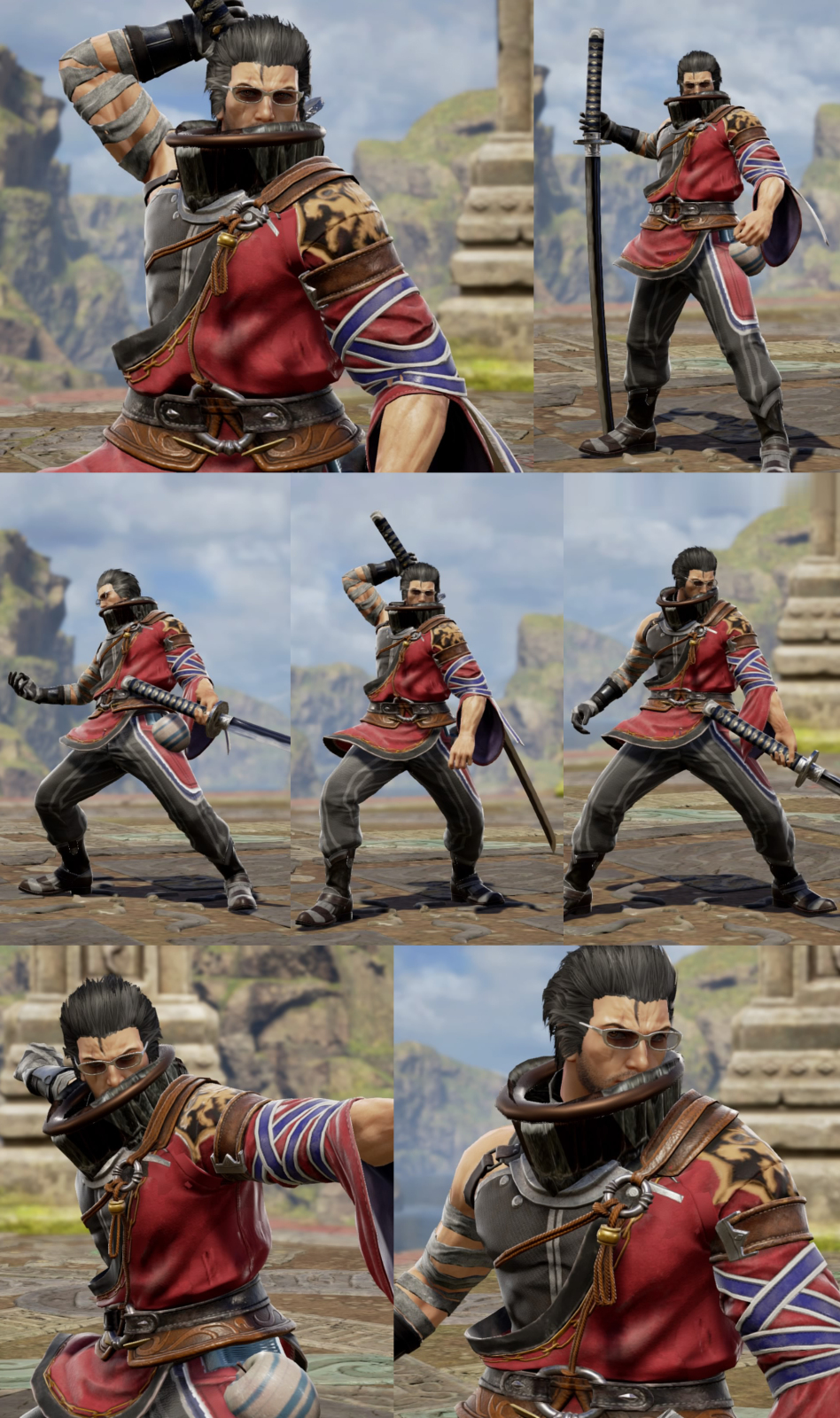 I was a little afraid to make him because of the lack of a flowing waistpiece, but you made it work!

Yeah, i thought too it will have been cool to have compatible the green waist cloth, but at the end was'nt that dramatic... i'm more pissed at no (SCV) sake bottle item lol, that will have added lot of character

Best Auron I’ve seen with the Destiny Robe. Most of the ones I otherwise see are with Azwel’s robe/closed.

My entry for the Zasa incarnations challenge

Wanted to keep some continuity, giving to his incarnations some common traits, keep him ever of african ethnicity in all his lives ( but ever changed face, proportions and in a couple of lives gender) also keept the focus on "close" to each other cultures, making him african/middle-east/mediterranen based (es. ignoring far north or east, or american continent)

For same reason keept the scythe as weapon for all, to represent a continuity of Zasa identity, just as the eye does.
I thought it was fun design thinking each Zasa scythe represent one of his past lives

Wanted to give him a sequence path through pre-SC ages, here the phases:

1- Origin Unknown, once a shaman in some lost african civilization. The original necromancer who was searching a way to immortality. he was well over 100 years old and his magic mutated his body to the point he was'nt entirely human anymore -others inside the spoiler-

2- His first reincarnation, as an high royal guard in Atlantis 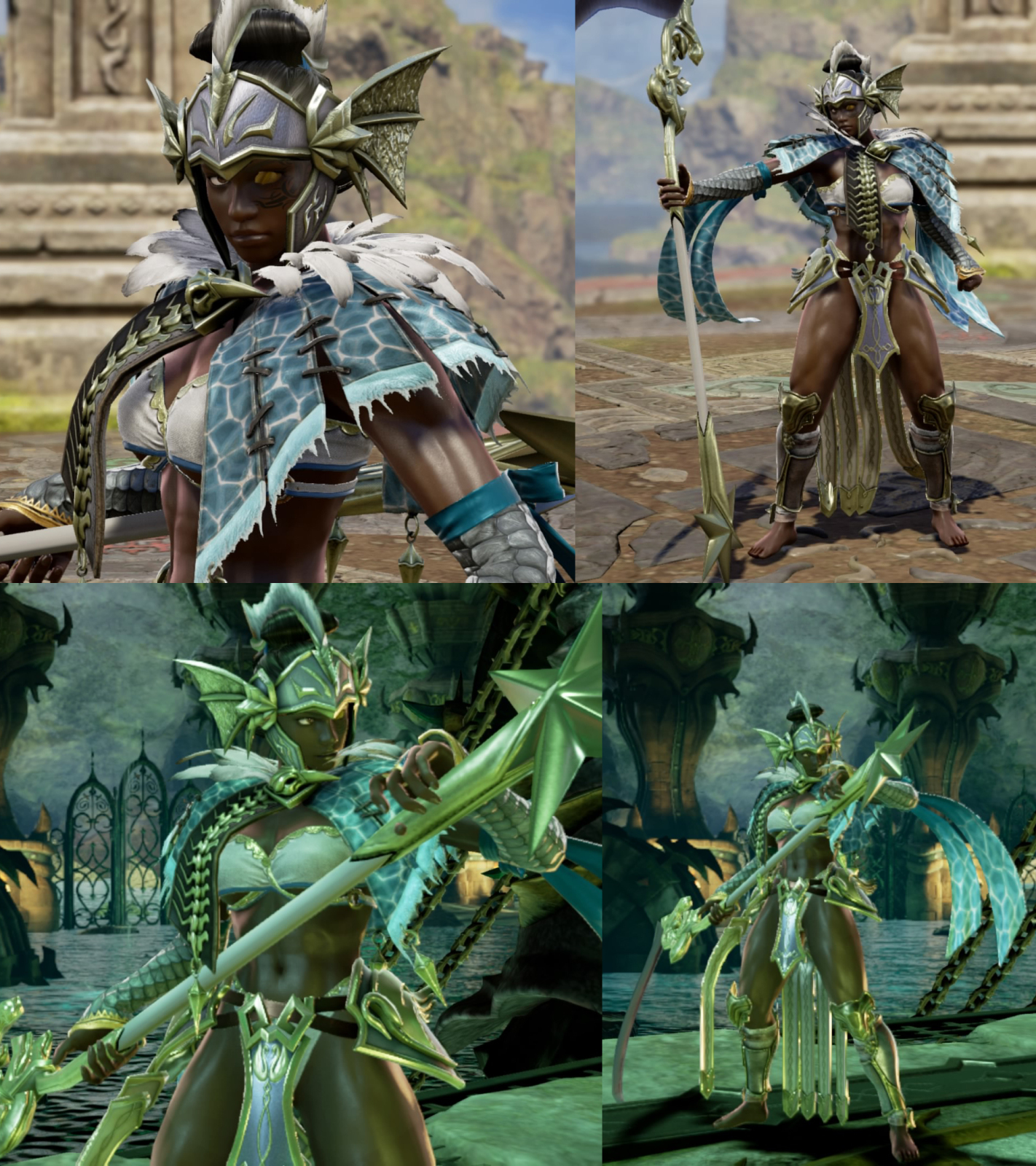 3- As a Babylonian warrior-King 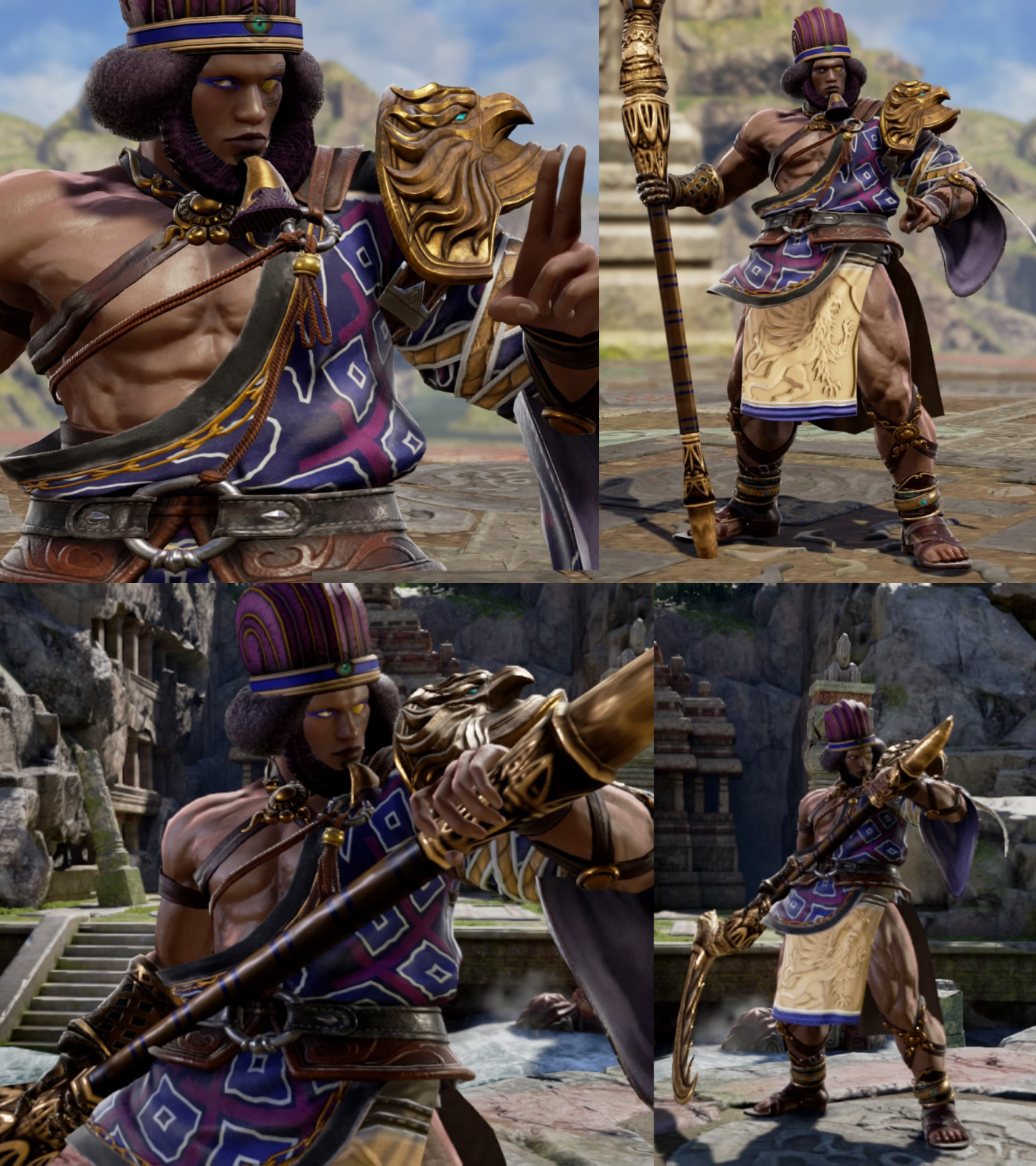 4- As an Egyptian member of the court, acting as Cleopatra's closest advisor 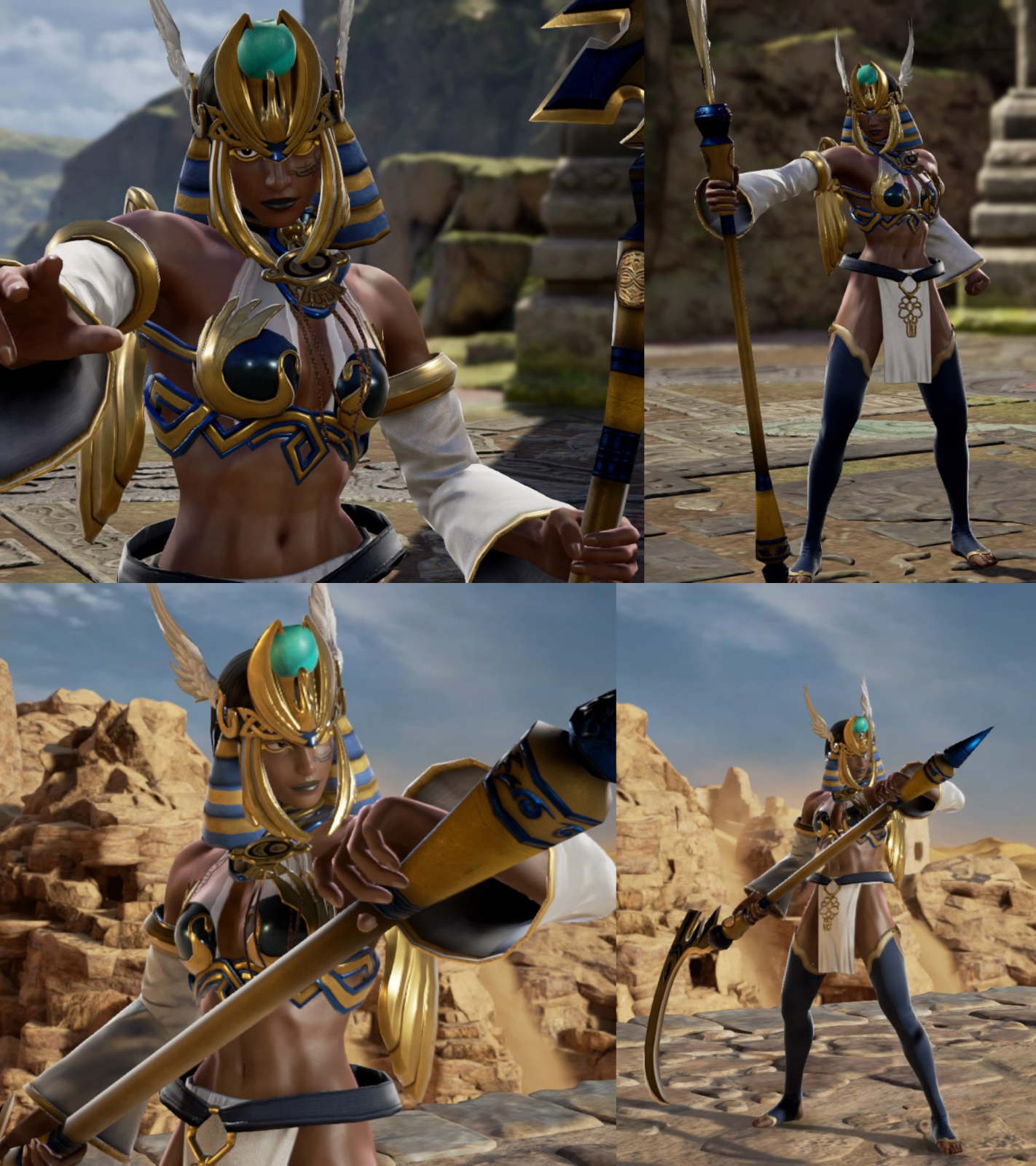 5- As a gladiator in Rome 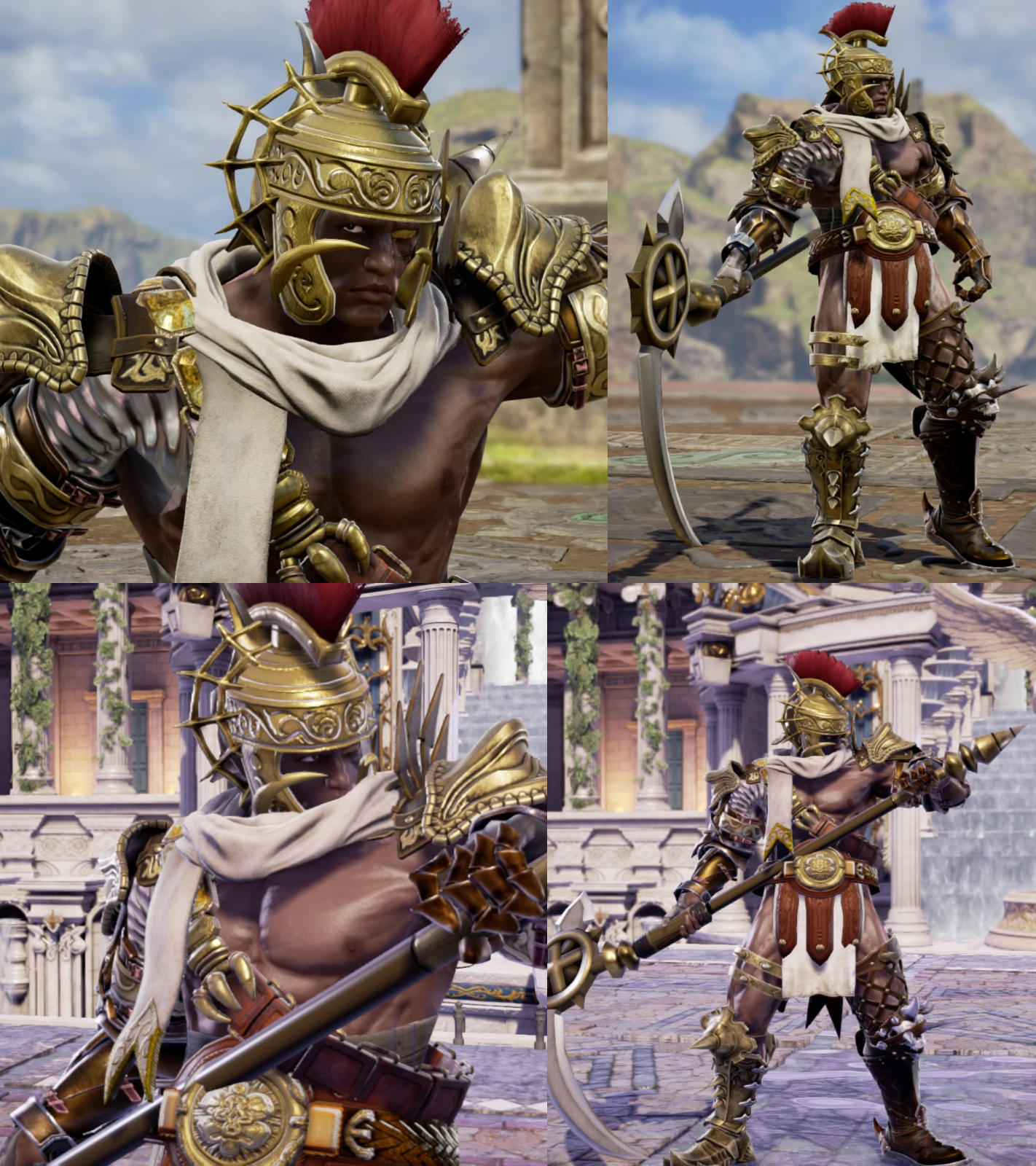 6- Zasalamel as we know him, his last incarnation 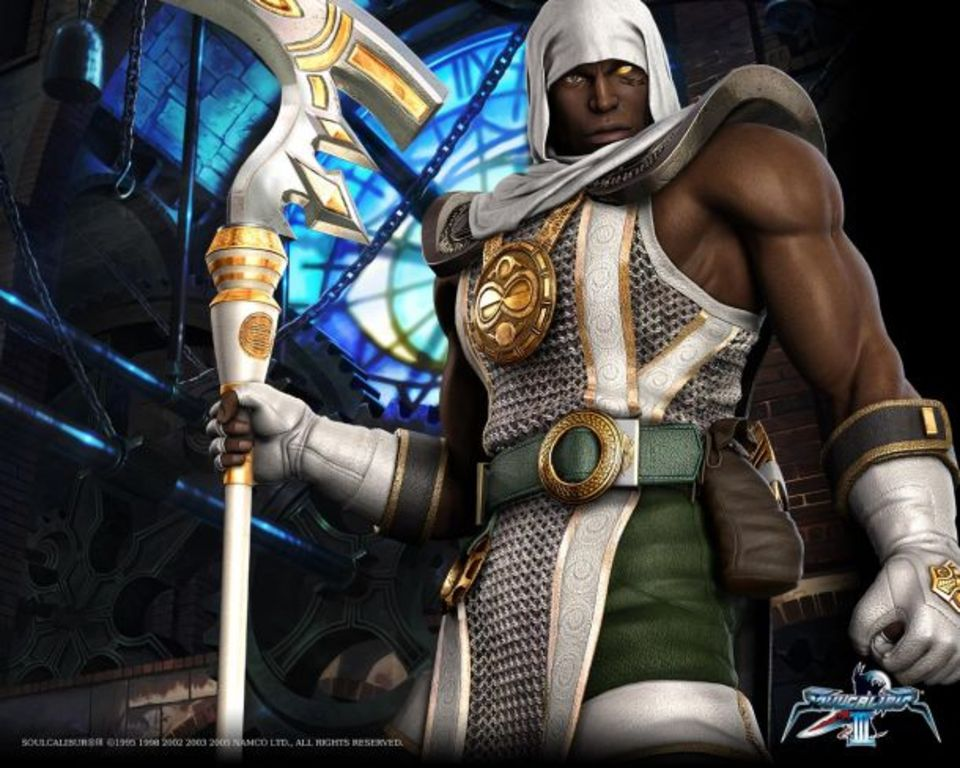 That Egyptian Zasalady is really hot.

2 more for the Berserk Group I'm adding all Berserk ones to first page too

A female angelic OC that i thought looks good next to the armored masked angel-giant of few pages ago, fun how a violent style like Cervy's seem somehow classy on her.
The gun shots seem just shock waves generated by the mask lol Changed the style of the Angelic CaS, works crazy good on her ingame Pope Arles, @Norik will be familiar with that as fellow Saint Seiya bro :D
Gorgon Shoulderpads were perfect for this, will have made it a very close recreation, too bad sc6 robbed us of 2/3 of the stuff