Even PSN isn't safe from the HEX editing plague

https://www.youtube.com/watch?v=r6-O_VP6H7E
You asked me to explain "so few issues". I was referring to hitbox issues caused by varying height. I bet you can't even provide me with 3 examples.
I have proven it on this site before, and I'll give you the short version because while I hope you understand, I can see how unreasonable you are just based on how much somebody's meaningless CaS seems to annoy you.

Listen closely.
Regular characters ARE CaS with specialized clothes and parts.
Clothes and parts do not effect hitboxes.
Only 2 variables within the entire game effect hitboxes; height and obviously style.
The issues you've seen are due to the fact that certain characters are not the sane height as the reccomended height, ergo you see differences.
CaS edited to be the same height have exactly the same hitboxes.
Algol is Height 5, therefore he is no different from a Height 5 CaS, because he is a Height 5 CaS.

Something to think about.
If I make a CaS, and copypaste Algol's parts onto it, when does it stop being a CaS? Is it his fingernails? Is it his abdomen? Perhaps you think what slot he's in the character select effects hitboxes?

You need no more than that to convice you, unless you'd like me to message you the fucking code to prove that there is no difference. If you want to see my early tests, check out the 'CaS mode thread', page 13 or so.

I cannot understand why you'd object to something purely superficial. Armor break's effect on your appearance is just that, aesthetic, and it can only be improved over the basic, and if you understood how easy it was you'd be asking why it's not an option in the game. But hey, if I don't get a reason this time I've asked, I'll just leave you to it. You can think what you want.
I'm sorry, but Reg. Character hitbox ≠ CaS hitbox. I also hope you do know that elements of gameplay are not meant to be changed. If you want the armor break to be more "realistic, like the 1p/2ps of regular characters" here's a shocking thing you can do: USE THE REGULAR CHARACTERS. And here's another thing: If you claim that these issues are not present, I'd like you to prove that it's not. There is proof on this very site that CaS and regulars DO have different hitboxs, and that they DO make a difference in gameplay. Hex editing also doesn't appear to be well-liked around here either. The mass amount of complaints about hex editing that can be found on this very forum all state the same things. And state these "so few" issues. I guarantee at least one of them WILL matter in gameplay.
And finally, don't act like I defended making invisible characters, because I didn't. That is a problem, my only point was that it's something I've barely ran into on the Xbox, that you shouldn't be so worried, and that it's not a fucking plague.
Oh and Algol using Nightmare would have the exact same hitbox as a Height 5 CaS using Nightmare. There are so few issues there's almost no chance you came across one, yet alone enough for you to say "issues everywhere". If you want I can give you the whole speel about the differences between regular characters and CaS if you like.
@lochlan You can't remove the armour break system, and I don't know what gave you that idea. While some are increative about it, you can make you armour break more realistic, like the 1p/2ps of regular characters, rather than just being in your underwear or trousers. Why would doing that annoy you? What is your problem?
I have a video where I fight him, too.
Wow i literally just fought this exact same guy and he sent me a message that said "fuck your shit" even though he beat me xD
Lawl.
Garjian, do you not even know how petty an issue not having your CaS costume break off is? He also used an Algol edited with NM's style, and there were hitbox issues everywhere. If you're going to use them for the sake of trolling or being humorous that's fine by me; If you're going to use them because of such a negligible issue like "waaah dis opton wont work on my CaS ;_;7 RIP in peace CaS" or "lelelelel, let's use my inivsble cas and rek people and get haetmael xDDDDDD". Armour breaks are a part of the gameplay: If namco really didn't want them to happen, THEY WOULDN'T HAVE PUT THEM IN. They would have made the costumes static, and never change. But I like the costume breaking. It adds some realistic ideas to the game, and they don't even need to be fixed, because most non-hex editors agree that it either A) happens at one point or another or B) It's not a big issue, let's move on and play the game. The issue is so negligible that you can hardly argue for it.
That happened me too https://www.youtube.com/watch?v=XstEQ_j7DHY
Actually somebody did use an invisible character on me once, once... I've not heard anything of these combos but I don't doubt that height alterations can affect that, just as they do the opposite.
It's the people who abuse the fact that they are mods. It allows things such as combos to work that wouldn't otherwise. Also it's common knowledge to anyone who has seen the tutorial videos that you can make characters invisible, because instead of keeping his mouth shut, he told everyone not to "be an asshole"
That's not how the human psyche works.
@Mejic ...Almost. Most of Algols weaponry is a slot 1 accessory and/or part of his face. It's easily added to any Algol characters to avoid the invisible hitbox...

OT: I don't see why you hate it so much. In my time on the Xbox I have only come across 1 person who really abuses hex edits. Though I don't like when pre-battle it states, in this case, "Dampierre, Style: ---" and I'm fighting Algol, it's not much of a game changer... but this one guy, xD9x Anime... His characters are above Astaroth's height/below Viola's height causing some glaring hitbox issues, and he constantly sets his Ranked losses to 75 every time he loses. I can't stand him.
Other than that, what's wrong with fixing armour breaks and giving yourself more CaS options? It's hardly a "cancer" or a "plague", a 'fad' perhaps, but it's not killing or destroying anything.
The cancer spreads.
Norik, I probably should have explained: I hate people who hex edit unironically. Do it for humor's sake, but not if you're trying to seriously fight with them.
Fuck patches.
People are bored with how poorly managed the game is. I mean, there hasn't been a patch in ages?
Well most of Algol's move set requires Algol's character model to be shown correctly, for other characters it's not such a problem
"Plague"? What's the big deal? 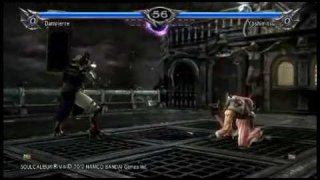