Eye of a Samurai:Due K

05:20
This 22B could've been converted into a CE -> 66BB near wall combo and followed up with wall pressure. Both players have had a couple of opportunities to utilize the stage better by this point; for Jimbo's case, it could have been instrumental in overcoming the damage deficit. I think Jimbo noticed this, because immediately after that round (06:20) he starts pressuring with the ring edge.

06:27
Even better than taking a 3B would have been to neglect the combo ender and instead opt for putting Jimbo's back directly to the edge, where the 3B/2K BE mixup threatens a ringout. By taking the 1B, he gained the opportunity to roll out and put your back to the edge by 06:30 and punish your attempts to reposition.

10:15
Mitsu's ringout game is lackluster except in the specific situation of up close with the opponent's back to the edge. 2K BE/3B give a 50/50, and 3B itself has another 50/50 for the forward RO. 3A prevents the opponent from stepping out and resets the situation right back into the 3B/2K BE mixup. If the opponent is twitchy and expects the 3B/2K BE, Mitsu has 4B. And to top it off, Mitsu's A throw forward ROs, so he can opt to take his stronger B throw for free. The biggest hole in this forward RO game is that Mitsu's main options for controlling lateral space allow the opponent to keep most of his progress in getting away from the edge even when he gets hit; characters like Algol (22_88A, 11_99K, WR A, 66A+B) and Xiba (6AK, 1A, 3BKK) have the ability to stop the movement and put the opponent right back to where he started.

I'm looking forward to the tournament matches. It'd be awesome to see you analyze your NEC14 match against LP.
nice mitsurugi bro 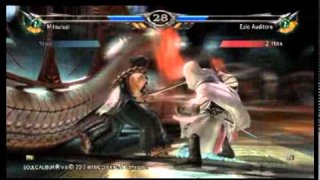