https://www.youtube.com/watch?v=1WkOiXJZxzM
No comments have been found at this time 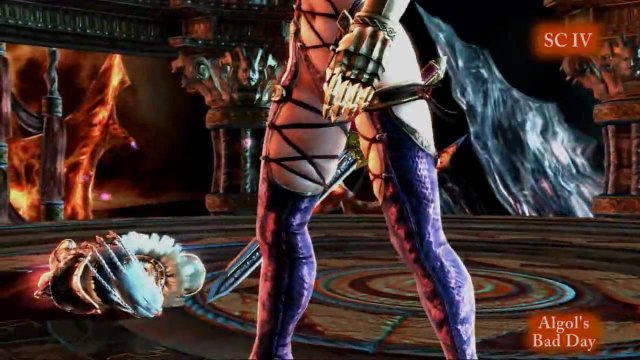 Mar 12, 2009 at 8:42 PM
Posted by skytoast
HD Remake Extended Director's Cut.
Plot: Algol attempts to seduce Ivy to his will but he's in for a very rude awakening when she whips out her snake sword.

Director's Note:
When I made my original film shortly after the game's release last summer ('08), it was my first attempt at making machinima using the SCIV engine. At the time, I was using standard definition equipment, capturing mostly in DV. I have since upgraded my equipment and moved to high definition. I thought it be fitting (and a nice challenge) to redo some of my older films since Youtube now offers the high definition format. However, it would be a waste of an opportunity if I simply re-shot the entire same film just to bring it to HD standards. So I added extra and extended scenes and a made a few changes as well in this remake.

With the original film, I was still exploring and experimenting with the in-game camera. I would gradually learn to master all the tricks in subsequent films. Going back now, it would be interesting to see what I could do with the original film. I've felt some of the scenes were over extended and there wasn't enough action sequences. So this time around I added more, showcasing more of the character's abilities and skillsets from the game yet still keeping in mind the overall feel and tone of the storyline.

I also added a bonus scene at the end for fun, hinting to a possible future story yet to be explored.

Anyways, this project was fun to work on since the hardest part was already done - scripting the storyline, laying out the storyboard production flow, etc. It gave me the rare opportunity to go back to a past project and see it from a different perspective, fix some mistakes, and make the film better. I hope those of you who watch it, appreciate the work involved and enjoy it.