https://www.youtube.com/watch?v=YkyH4tQfvyc
the description explains a lot. great vid
@seyfer: Thank you for the update with the description, but hating a character does not mean that I (you) should exclude said character from a combo video that supposed to showcase everyone.

Like I dislike Omega Pyrrha, but if I was doing a combo vid, I would gladly include her for the sake of consistency and fairness.

I will say though, nice video. I was looking at both videos (the PS SCIV one and yours)and the feel of the video is the same, which is good.
The new description may answer your questions.
Nice vid =) I really liked it, also I love the aPat combo even though I think the CE doesn't do a lot of damage.
i wanna see some damp wallcombos here :o!
Great showcase! I don't think a single comment mentioned this...
Where's Ezio? Where's Dampierre?

Also, the Algol combo was nice, but I was hoping for a longer combo :(

Whatever, it's nice to see what this video attempted to accomplish and completed.... To be awesome!
@Zane, yeah that Aeon combo looked techable. however,the AI shouldve been able to tech in the middle of it, though, if that was the case. im not an Aeon user so i wouldnt know better
i like the video, but, that Yoshi combo bugged me. it was just a staple combo with a brave edge. showcasing a a:B+K, 2a:B combo or a combo with 4AAA wouldve been grand. any reason why that wasnt done?
that aPat combo can also be extended big time. And Tira's lol.....
@Tetsuo, Aeon combo doesn't work either. You can escape that. Also where's Damp and Ezio? oh and why do Leixia's 2B+K when you can go for AA* instead? lol
@zane, technically, the combo will work. its all mix up. its not completely garenteed, but definitely possible if the grapples arnt broken
Try this one for Zwei next time: A+B iW 3B iW 1(B) 6A 66(A+B) CE B+K B+K* 1K 44B+K
Oh, and the Astaroth combo doesn't work. You know you can break grabs in SCV right?
The Only Thing That Looked Doable Was The Rugi Tech. Even Then... Why Bother? 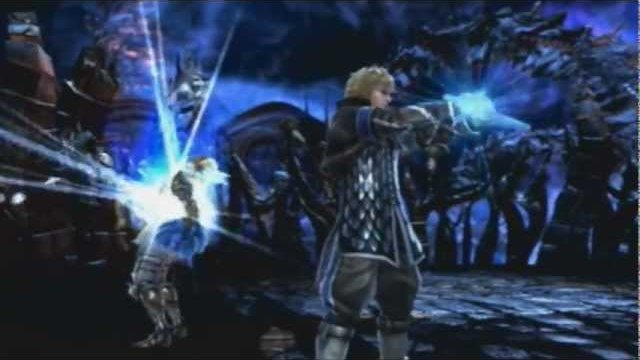 Feb 15, 2013 at 10:46 AM
Posted by seyfer
The idea of ​​this video was to do something similar to the trailer released by Namco for SoulCaliburIV.

- The protagonist always wears his first suit.
- The protagonist runs the combo in your stage.
- The opponent always uses his second suit.
- The antagonist is determined based on phase 5 of the standard route of arcade mode (excepting Nightmare & Z.W.E.I.).
- The combos try to have the new features included in SoulCaliburV, BE & CE without exception.
- The combos are "not trying to be the best" but try to have some degree of originality and elegance, pleasing to the eye of the beholder. Most of these combos are very difficult to do and nothing convenient and probably a few are executed in real combat. A particular feature of most of the combos is that they can't be achieved without a strict positioning.
- I don't know the damage that made ​​these combos because that record when I cleaned the screen completely.
- Personally I hate the guest characters so that Ezio Auditore is not included in this video.
- I have no grudges against Dampierre but I am a protestant to the policy of the DLC, so if Dampierre not appears in this video is because Project Soul wanted it.
- Astaroth: In this case there isn't combo because the grabs can be broken, however for a character like Astaroth whose potential and style depend of the grabs, he admits this little right.
- Yoshimitsu: It's the best thing I could imagine using meter and without walls.
- Aeon: This combo can only be escaped using Just Ukemi Guard against the last fire.