https://www.youtube.com/watch?v=dR5WQknibXI
No comments have been found at this time 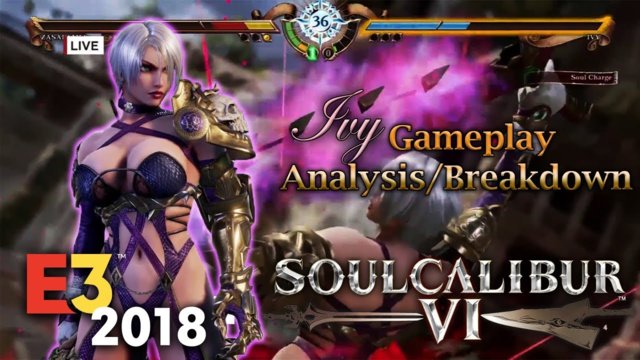 Jun 11, 2018 at 1:55 PM
Posted by AmyIntwined
-Here is my Analysis/Breakdown of Ivy's Gameplay from E3! It's very broad & simple, I wanted this to appeal to the Casual Audience as well. More details can be found in my Notes presented. Keep in mind Move properties/inputs may be the same or change prior/post release. Enjoy.

My Notes (Am using Notation from previous installments for Context):
"She has her 6A~A+B.A from Coiled back

3B from SCIII Whip State. Launching on NH, CH properties?

Her 44A horizontal from SCII is back.

6B from Whip State (SCIV)

6K.B (into Ivy lick, though it wasn’t landed in the gameplay)

She had an Attack throw cinematic possibly out of SC state, resembled her CF from SCIV
Edit: This sequence is only from CS state, she goes into a 6B into a Break Attack)

Her 66bBE from V is now a standard two hit string. Prob. just 66B.B or something.

Her 2A seems like 2A from Whip State, don’t know if it’s held. Same concept can go to her 3A."