https://www.youtube.com/watch?v=pL4_cBLFVkE
Yeah, technically it's old, but I haven't uploaded it onto this site and I thought it'd be nice to have it here to keep everything in one place.
Mmm... is this and old video?... I watched those traps a long time ago.... 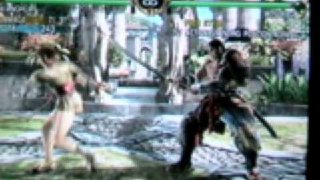 I discovered a cool little tech trap that nets you a crouch-throw if your opponent doesn't wise up. A tech trap is a trap where you knock down your opponent and punish them if they attempt to tech roll. The only way to avoid this tech trap (aside from breaking the throw with A or B) is to stay on the floor, in which case, you can start mixing up tech traps with Xianghua's 1BB for some guaranteed floor damage if they don't stand up.

The tech traps you will see in this video utilize Xianghua's 22_88K; a tech-jumping mid kick with a bit of a slow startup. It's a bit hard to land, but it's +2 on block and it forces FC, so it's relatively safe if you can get a chance to use it. On HIT, however, it places the enemy right at your feet with +frames on you. The best part about it? It catches techs on ALL SIDES.

Now then, a breakdown of the video demo: