https://www.youtube.com/watch?v=pbxlcsxm3lQ
Ladies...
I share my XBL acc with my brother known here in forums as Norik. I had to leave so he took over the Xbox, you can tell who is who since the character that I am most likely to use against someone that knows how to play is aPat, and in his case he uses multiple characters and in those he does not include aPat.
False 90% of them were 3-0. You were in fact; mopped. And when I joined the lobby you were in you left... Must have had something come up I'm guessing.
For you to use the term "mopped" would imply that you won 3-0 and that was not the case, all the matches were 3-2.

Also you might be right, my skill level maybe be not ass high as yours because I don't spend a lot of time playing, but that doesn't mean I can't win because I've done it a couple of times in the past.

You already know my Ign so feel free to invite me to your lobbies if you make one.
Khill, I honestly don't care whether or not you see a point to this video. :) This video was to troll Fahros for being a sore loser/ RQ'r on multiple occasions. I uploaded this because it was the first occasion I had caught .If I overkill you or anyone else and that pisses you off, you'll just have to get over it. :)
Your trip to Venezuela is no excuse for getting mopped, I'm not unbeatable , that's no secret. However I hope you making a post about you beating me in ranked isn't a poor attempt at an undercut to make yourself seem as though you and I have corresponding skill levels. Because we don't, and never did.
Three moths ago when I first met you in ranked you were awesome, you still are but I was able to win against you, we even played some matches in players, I left for almost two months to Venezuela, there the connection sucks and you can't even play online so I couldn't play at all. A week ago I was playing and I found you again, I saw that you got a lot better or maybe since I have not played for a long time I wasn't at my best capability to play, but what I saw was not the same cool player that you could actually enjoy a match with.

I invited you to a players match and yes, you won I think all the matches, but you were overkilling not only me but also the other people in the room that did not even stood a chance against me or you.

Maybe I was wrong the first time I met you, I don't know.

I am not making this comment so you change because its your life and you can do whatever you want with it, but I just don't see the point on this video.
Shit, I'm out of popcorn.
You forgot the /s.
You're right lance... I was a sore winner here. The last thing I want to do is hurt the community. For all the people he's wronged, he has also helped people such as yourself. I should keep my personal problems with Fahros's attitude to myself and be peaceful and respectful like the rest of the 8WR community.
ArchDiety loves to win snipe.
Whatever man. He showed his loss, and even that wasn't enough for you. You have to be a sore winner and attempt to degrade the man with this shit. Fahros provides regular entertaining vids (with high production effort) and promotes the game on the regular. He has even answered questions when I asked for help on my youtube channel, true to his namesake. I am sure he has done the same for others. Shit like this only hurts the community by pushing out cool people. Who the fuck would want to share when the only audience is a bunch of pompous, judgmental haters? No-fucking-one. This is why I stopped uploading scv matches.
At least you did it with class. What a Cervantes CaS.
Thanks twix <3
Nice double post Hawkaloogie. Don't worry though took care of it for you. ._ .b
Um you uploaded a video calling him a liar in the description with no evidence besides a questionable video, that goes into the "exposed" category. Anyway im sorry for calling it like I see it and defending, its just a that a FT5 would have been more appropriate.
ZeroBeat, turn your brain on and use your eyes... Where did I claim to expose someone? Stop defending Fahros, he's a big boy and can take care of himself. Hop off kid
Yeah but if Fahros is so confident in his ability then why all the shit-stirring
Dietous you should be embarrassed, you uploaded one match not even a FT5, yet you claim you exposed someone.
ok Onyyx why are you bashing fahros? Because he uses mitsu? Mitsu is a very good character for how simple he is and hes not very well liked, we all know that. 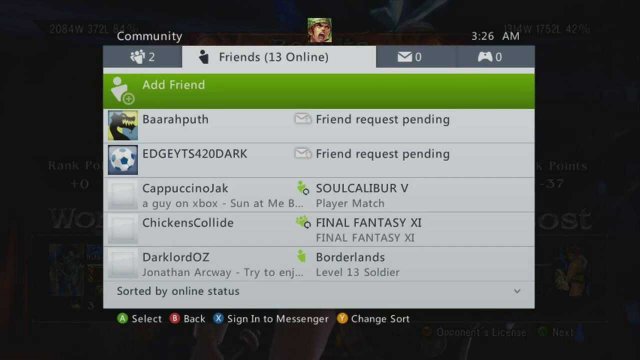 Jul 3, 2013 at 12:28 PM
Posted by Deitous
FahrosTTTT tried to say he lost because of lag when you can clearly see the 4 bars connection symbol at the beginning of each round. Better luck lying next time Fahros! My PVR doesn't pick up my mic so you cant hear what I'm saying back to him in the party, although it's kind of self explanatory. Hope you watch this Fahros! Like, comment, and subscribe! Peace out! Jelly haters FTW!
Keywords
Game
Soulcalibur V (2012)
Online Matches (PSN/XBL)
46     1     2,033