https://www.youtube.com/watch?v=UP4_iUkdXi8
Heishiro Mitsurugi is a BEAST. I like how realistic the katana looks now.
This Natsu was terribad. This Mitsu was terripro.
Saitoh: I noticed in videos the 2K (BE) (BE) only sometimes does the slideback stun which gives CE. Why is that? I assumed it was CH.
To combo of 2K it's either 100% or 200% meter.

Counter hit is not mandatory here.
Finally. Natsu in HD.
Throwing around the word broken is... unwise. It's an un-seeable sweeping low. He had that in SC1,2 and 3. In Sc4 it was steppable but gave little combos (66K on normal hit, 11BA on CH). In SC1-4 it rings out.

The SC5 Version is just 2K by itself with no meter, a KND low which gives neither combo or ring out. To get those things, he has to spend 50% meter. If he wants to get combo's after, he has to spend EVEN MORE meter, 200% for BEx2 + CE. 200% Meter. Think about this. As far as I'm concerned this is actually a NERF, not a buff, or at the very least, the same strength but a re-purposing.

Please, think before you throw around the word broken. More importantly, just think about what you are seeing in general.
Natsu player.. What happen to using sum meter? Damn. Got that ass whooped.. B(..... It hurts my eyes watching my main get slaughtered.
That BE low attack is so broken.
Agree with ProvesaDark.
And I'm sick of Mitsu's easy damage brave edge low attack.
Top French Player Mitsu. Not Natsu -_- 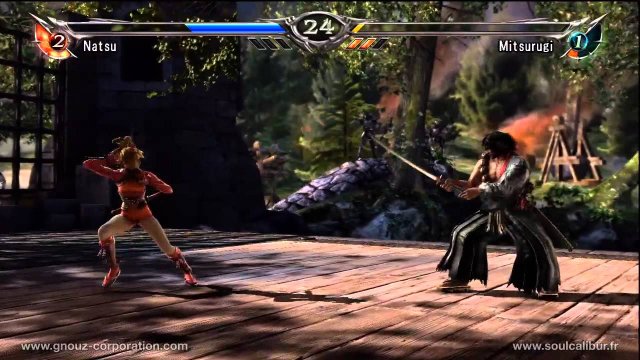