Have you ever experienced Matrix Calibur? It happened to me once. I know for a fact that it was because of a problem on my end because I played 5 people in a paticular lobby and I experienced Matrix Calibur against all 5 of them, but when they played each other, it was business as usual. The game went back to normal after I restarted my modem. I've never since been able to replicate this phenomenon (not that I've actively tried to).

What is Matrix Calibur? Basically, it's the game in slow motion. No, I'm not talking about the normal slow-motion crap you get against people you have a bad 1-bar connection to (I had 3+ bar connection to all of these people, by the way) where the game is really slow, there'll be random lag spikes where it just freezes for a split-second or so and the game will take 1-2 seconds to even register your button inputs, often making multi-button natural combos (like, say, AAB) simply not register).

No, this game ran smoothly. There were no lag spikes. There was absolutely no button input lag. The game just ran at approximately 1/6th speed.

Again, it was just like playing the game normally, except at 1/6th speed. I think the audio might have had some slow-down, but it was very smooth and nowhere near as slow as the gameplay itself, yet it didn't feel disjointed. It was all very bizarre.

So... anyone else who's experienced it? Anyone who's got any idea why it happens? Would be funny to be able to induce it on purpose for some funny matches. Again, no input lag, so it's basically a fun alternative to slowed down practice mode since you'll be able to properly block/jump/sidestep pretty much everything on reaction.

Point of interest: Did you know that if you input commands too fast, the game won't register them? For instance, if you try to do AAB with Leixia wherein you do the B way too fast after doing the AA, the B won't come out? It happened in Matrix Calibur. I had to deliberately delay the input of B slightly for it to come out. Thus, logically, in a regular game, if you input the command too quickly, the B won't come out. You'd need to be a robot and/or using a special combo macro for that, though, probably. 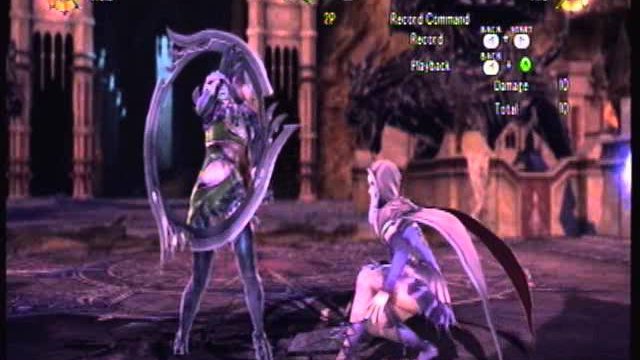 Not exactly what I experienced.

1) The gamee was nowhere near that slow.
2) The matches did not contain Tira.
3) The matches were slow from the very start.

That glitch does odd things to a couple of Viola's attacks.
I'm testing it now and so far; B+K and all similar attacks are normal speed and have no hitbox, 6B+K automatically and instantly cancels into 6B, 33_99(B) cancels like aG_bG_kG, then freezes for the duration of the attack, then animates as normal but with no hitbox. Bizarre.
It's also impossible to perform a standard jump, and B+K BE is normal speed.
Heh, I was fighting the CPU and she used her CE which didn't come out, and send the game into fast-mo, but only slightly faster... :/

Oh cool, it works with everyone possibly. At least, it also works with Natsu's A grab.

OT: I have had something similar. On SCIV it was once so laggy that each frame persisted for 5 seconds or so. I was playing as my Xianghua CaS so it was quite interesting to see each frame of her animations... I guess.
You must log in or register to reply here.
Share:
Facebook Twitter Reddit Pinterest Tumblr WhatsApp Email Share Link