Mi-na's back!!!!! We've waited for this day for 6 and a half years, folks. And now that the dreaded days of SC5 are almost over (no offense to the SC5 faithful), we can look forward to a new era of our favorite Korean chick rockin' dat pole. Since we've got an announcement, let's say a prayer to the SC gods for at least a mid-tier status.

So for those of you who played SC4 like my old ass, you'll likely notice that they've expanded upon trying to completely separate Mi-na's style from Kilik's. There's not much to see yet, obviously, but here's what we know so far:

- 0:08, I'm not sure is this is an attack throw? It has a slow startup but looks specific for hitting grounded opponents.

- 0:10 is 6K from SC4, the old Auto-GI. Notice how she dips back on her weapon rather than just dropping down straight like before.

- 0:11 it looks like she's going for SC4 66B and then it looks to cancel into a tackle or something? There's flashes so I'll assume this is meter-based.

- 0:14 looks cool, a wild swing horizontal. Probably high. But I'd rather it be that than mid and unsafe!

- All the Reversal Edge stuff, yeah. I have no idea how much of that was automatic.

- 0:29 looks like it starts with SC4 66A, then transitions into the windshield wiper attack (SC4 A+B). Then sweep kick into 6K which is followed up with an attack. I'm assuming meter is involved in all this.

Then the rest is the two side throws, CE and stuff. I'm wondering if our girl has a good soul crush ability like before. We'll see.

Where my 4kb at

She doesn't look like the old keep-away/zoner of SC4 and maybe more suited for a rushdown offense. Or at the very least, a strong combo-based punisher.

We didn't see too much of any specific theming in the guard-crush area, so I don't think she'll be taking this route like in SC4.

Windstar said:
She doesn't look like the old keep-away/zoner of SC4 and maybe more suited for a rushdown offense. Or at the very least, a strong combo-based punisher.
Click to expand...

Probably a bit of both honestly. That sweeping lethal hit horizontal looks like it'll be good anti-movement/keepout. She also still has her SC4 66B. Soul Charge Mina seems more like Kilik's in that she becomes more rushdown string heavy.

This game doesn't seem to have as many "archetypes" like before. Holes that characters once had are being filled to some extent (Taki ninja stars, Yoshi fullscreen CE, Sieg getting better mixup in close, etc)

I just hope her old SC2 bA puts the opponent in deep stun on CH again. But, that's just my wishful thinking. 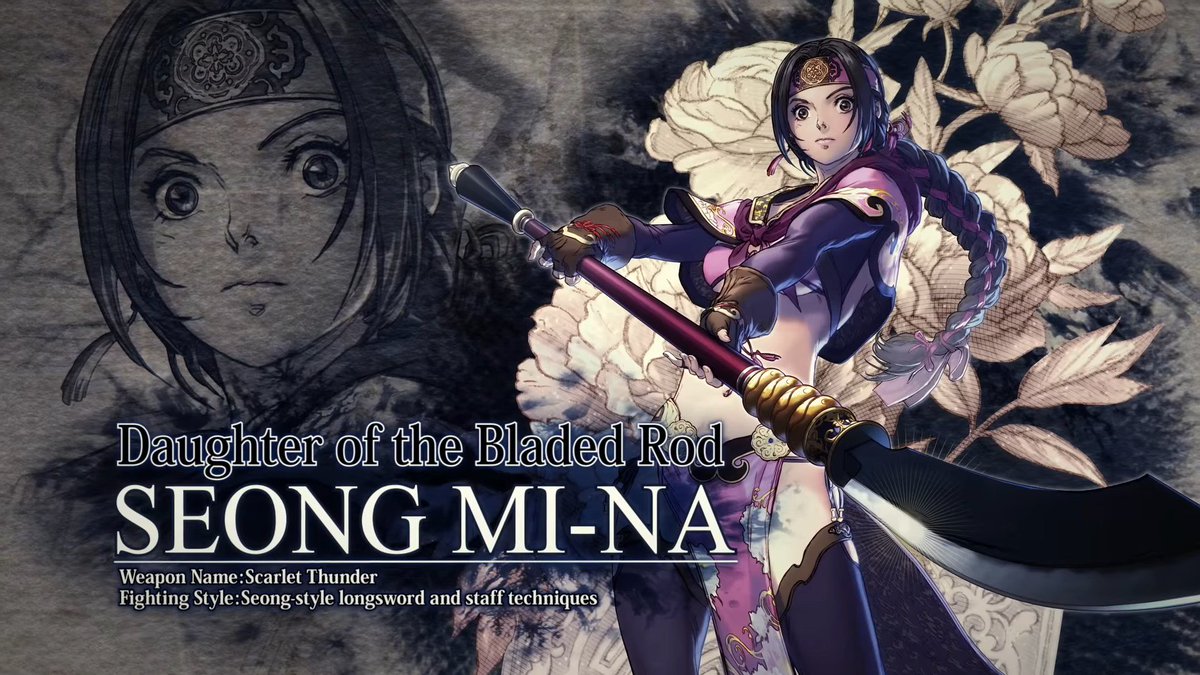 Day was made yesterday with this reveal. I'm hoping for somewhat of a closer leaning to SC3 Mina, but I doubt she will be THAT effective at zoning. I am in agreement with you guys. Hope she has old bA, and 4KB. Definitely excited to see my fav character return.

Basic Profile from Seong Mi-Na (paraphrased):
Upset over her father's insistance on finding a suitor to marry Seong Mi Na, she makes the decision to run away from home again. With the aid of her servants at her, she is successful in escaping. Little does she know, however, that a certain practioner of Myeong School and coast guard arrives shortly after her escape, and departs immediately after her.

Scarlet Thunder
A curved spear that has been passed down from generation to generation. Despite it's considerable weight, Seong Mi Na has practiced with this weapon since she was a young girl. When she escaped from her home she took the spear with her. Naturally gifted, the spear is a natural weapon for her, and a most reliable travel companion.

Seong-style Technique and Staff Techniques.
Despite being the daughter of a famed technique from her homeland and training even at a young age, Mi Na was defeated easily by Ivy Valentine. After meeting with man who saw the battle, Kong, she forcfully requests him to teach her the staff techniques from the Shinshan Temple. Quick and eager to learn, Mi Na quickly mastered many of the staff techniques taught to her and through them learn how to utilize the center of gravity in her small frame as key edge to developing her fighting style and overpowering her foes.

Windstar said:
Little does she know, however, that a certain practioner of Myeong School and coast guard arrives shortly after her escape, and departs immediately after her.
Click to expand...

"Seong Mi-Na is a 'power' oriented character who specialises in wielding a longsword that handles with really long range.

Among all the characters in Soul Calibur 6, she excels with having high launching and combo starting attacks from far away. Many new additions to her movelists now include low risk but high and wide range attacks that will catch opponents trying to move to the side to get around her. (side stepping / side walking)

She also maintains her previous characteristics in the older SC games of having different properties on her attacks when she strikes the opponent with the tip of her weapon and having moves that can easily break the opponent's guard this time around. Triumph over the opponents with her longsword as she personifies the strategy of fighting the opponent at a distance with power."

Frayhua said:
She also maintains her previous characteristics in the older SC games of having different properties on her attacks when she strikes the opponent with the tip of her weapon
Click to expand...

Eh, IKR? Hopefully they get it right this time.

Trilliant said:
Eh, IKR? Hopefully they get it right this time.
Click to expand...

Mi-na will be fine and she'll be better than Talim. Her reveal was the most important SCVI reveal yet because of the possiblities who might be on the main roster vs Talim's reveal being only important to the Talim Fanbase.

Those with good strong foundations with footsies will succeed with Mi Na. Those that don't, won't.

Hands are in the air right now. We'll just have to wait for Gamescom and see how she'll play (That is...if she'll even be in the Gamescom build).

Windstar said:
Those with good strong foundations with footsies will succeed with Mi Na. Those that don't, won't.
Click to expand...

Now this is definitely true. What I've always liked about her. Every character seems like they can compete, which is all I ask for.

Windstar said:
Those with good strong foundations with footsies will succeed with Mi Na. Those that don't, won't.
Click to expand...

Reeeeeally depends on the frame data though...

ZeroEffect317 said:
Reeeeeally depends on the frame data though...
Click to expand...

100%. I'm all in on a lot of my old SC4 characters, but who I end up playing vs who ends up a pocket character is heavily gonna depend on how Frame Data looks.

Doesn't matter how good my footsies are if her frame data is like SC4's.