With a thick, greasy, big, black, and well kept fro, the tall and slightly frightening man stood upon the curb. The light of a Cadillac racing by shined on the man's golden brown shades. In the distance, a lone jimmy can be heard rustling. It was a dark night. Only the gold from the man's incredible grill could be seen as he stepped off of the curb, his Jordans smoothly gliding along the concrete. His goal was simple: Make it to the corner store to obtain fuel. The fuel that is the only thing that can bring light to the darkness and fill the void that is within his cold heart. Liquor in a brown paper bag. Roughly half way to his destination, a snow white Escalade cruising by with slightly opened windows gunned this man down. In his final moments, he laid on the ground staring intensely at the sky while cursing duh lowrd. Then, suddenly, a golden light appeared before this man's eyes. He heard a voice. A voice calling to him, seemingly familiar. Before long the dying man could make out some of the words being spoken to him. "Yo", "the" the man heard struggling to listen. Finally, the man took a deep breath and focused on the voice as hard as he could. He could finally hear the message. The voice spoke, "DAMN NIGGA!!!!! YO ASS - JUST GOT SHOT - THE FUCK UP - JUST LIKE PAC - BUT GUESS WHAT?!?!". The man replied, furiously, "Shut yo ass up foh I shoot yo bitch ass!". The voice paused momentarily. The golden light began to shine brighter as the voice suddenly spoke in a high pitched, seemingly mocking tone, "Nigga, you gon shoot Yung Jeezus???". Suprised, the man responded, "Pfffft you ain't Yung Jeezus". The voice chuckled lightly and said "Yeah, you got me foo', but what if I waaaaz? Yo ghetto ass coulda shot Jeezus HAHA - I made the change from a common thief - To up close and personal with Robin Leach - And I'm far from cheap - I smoke skunk wit my peeps all da---". The man quickly retrieved his gat and shot the light. It suddenly dissipated just as quickly as it had appeared, exiting with a loud crashing sound seeming to have come from the ground. Ignoring the sound, with the last of his energy, the man crawled to the curb opposite the one from which he hailed. He had finally made it to the corner store. As he approached the register, the cashier quickly ran to assist the man. After struggling for a few moments, the man finally managed to speak the words "Homie, where da lickuh at?". The cashier looked the man in his shades and calmly said "Sorry we're out of liquor, I just sold the last bottle to the ghost of Biggie Smalls". The man then collapsed and died.

If you made it through the story, you are a trooper and I respect you.

CorrectDefense said:
If you made it through the story, you are a trooper and I respect you.
Click to expand... 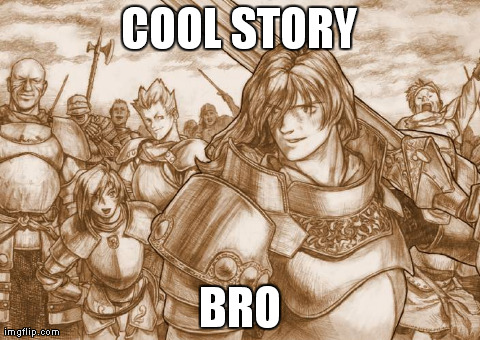