Girardot Argezas (ジラルド・アルゼザス, Jirarudo Aruzezasu) is a fictional character in Namco's Soul series of fighting games. He appears in Soulcalibur III's side-quest mode Chronicles of the Sword as the player's mentor at first, then as a rebel enemy. He's also an unlockable Bonus Character in the main game. He represents the "Lance" Create-a-Fighter discipline.

Girardot was one of the best tacticians and soldiers in the Grandall Empire. He was mostly known for his cold-minded and dirty tactics. To Girardot, victory was the only justice and he was not hesitant on using low tactics to achieve it. He also thought it honored those fallen in battle.

Even when he was accused of selling his soul, he stood firm with his will strong enough to overcome his fate. But when he became the instructor of the Parousia Academy, self-doubt started to develop in him. One by one his pupils marched to war, and not a single one returned alive. When the young girl he considered a daughter died as well, he recognized the crime he committed.

He instructed them how to die, and he was fostering death. Still, he faced reality and stood firm. He vowed to protect the land and its people with his very soul until the end. 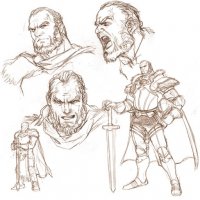 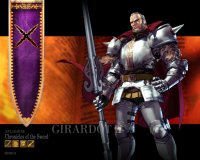