Heihachi Mishima (三島 平八, Mishima Heihachi) is a fictional Japanese character in the Tekken fighting game series. He is one of only four characters (the others being Paul Phoenix, Nina Williams and Yoshimitsu) to have appeared in every game in the series. He also makes an appearance as a playable character in the PS2 version of Soulcalibur II.

After completing his mountain training with his pet bear, Kuma, Heihachi stopped by at a hot springs resort to recuperate. There he encountered an ancient metallic fragment. According to old picture scrolls, this shard was a piece of Soul Edge, a notorious sword from medieval Europe. Grabbing the fragment in excitement, he accidentally cut his fingertip; and after a moment of dizziness passed, Heihachi looked around at his surroundings. A feeling of uneasiness washed over him as he was no longer at the resort he had been at just a few moments ago. He was stunned, but nevertheless remained collected.

After he wandered for a while, he concluded that he was no longer in modern day Japan. He had somehow traveled back in time to the later sixteenth century. Though he wanted to return to his own time, part of him was trembling with anticipation of what was about to transpire.

He knew the history behind the fragment, which was ripe with battles between warriors fighting for its possession. Now, he was right in the midst of it all. He eventually decided that finding and obtaining Soul Edge was the perfect challenge to test his strength and proceeded to seek it out. 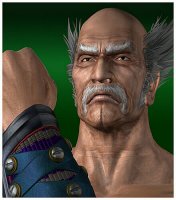