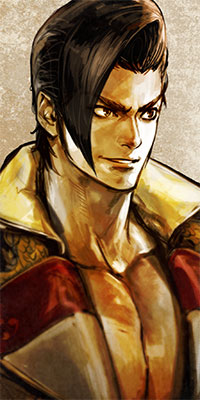 Whenever Maxi chains an attack from his stance after using "Pure Seven", "True Seven", "Neutral Guard", "Heaven's Guard", any version of "Zodiac Dragon's Might" except , or the step options during Reversal Edge ( ,, or ), that attack triggers Seven Stars Rebirth.

Whenever Maxi triggers Seven Stars Rebirth, a flashing symbol of the Big Dipper appears and the star corresponding to the stance he just attacked from will light up.
Seven Stars Rebirth is only triggered if Maxi's attack is not interrupted by the opponent until AFTER the first hit of that attack would hit the opponent, but if it does pass that part of its animation, it will trigger Seven Stars Rebirth regardless of whether it hits, is blocked, or even misses completely.

Furthermore, whenever Maxi uses "Pure Seven" or "True Seven", the properties only appear if the move is NOT used from Seven Stars Rebirth, i.e. the will not appear if the technique is used immediately after the techniques noted above, nor if it is used after triggering the automatic stance shifts from Left Inner or Left Outer.

The first time in a match that each star is lit, Maxi gains a bonus to his Soul Gauge, and the star remains lit for the rest of the match.
"Skewering Hunt", "Rear Kick" and "Black Serpent" will cause a Lethal Hit if they hit the opponent while triggering Seven Stars Rebirth (unless the opponent is already in a stun state). When all stars are lit, Maxi activates Seven Stars Severance and an indicator looking like the Big Dipper will appear beneath his health bar.

Once Maxi is in Seven Stars Severance, he remains in it for the rest of the match. Some of his moves are improved (see the corresponding section on this page) and triggering Seven Stars Rebirth will not cause the Big Dipper to appear anymore (However, Seven Stars Rebirth can still be used to trigger the Lethal Hits on "Skewering Hunt", "Rear Kick" and "Black Serpent").

Note that the star corresponding to "Right Inner" is always lit, since this is just his neutral stance. This star is there solely for the aesthetic and has no effect on gameplay.

WARNING: The first draft of this page was created with information obtained from Scuffle. Some information may be missing or incorrect.