Wish I could have seen all the games (had other engagements). All of the characters played made everything so hype:

Keev playing Ivy, SU playing Ezio and a bag of other characters, Hawkeye playing Hilde, LP playing Leixia. We saw a lot of variation that was missing in prior tournaments in just the first few rounds, and I'm assuming the rest of the tournament was just as entertaining.

If there's anything I've thought that these pros are trying to say more than ever is "fuck your tier lists". The whole thing had me thinking how silly the Viola ban concept is. In this game no one is as ridiculous as SCIV Hilde, or as bad as SCIV Rock/Mina. People need to start giving Project Soul some props, and while everyone is rather pessimistic, I'm still hoping we'll get that last patch of fine tuning; even if it's after Bandai-Namco makes all the money of TTT2, their new cash cow. 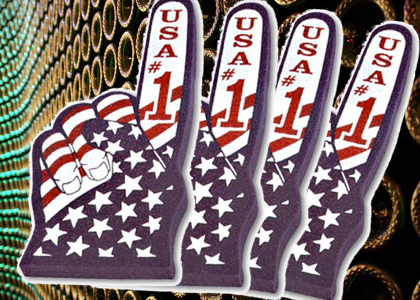 Congrats to LP for MLG Summer Arena. I was actually surprised he chose Alpha Patroklos during his fight with Kayane. I guess he really hates those mirror matches. He didn't seem very confident in his pick on aPat but it pulled off in the end.

Also, shoutouts to Kinetic for running 2-3 against SU. This is a genuine comment -- you are now officially a serious threat, if you weren't already after EVO.

Good show from all the players.

I was honestly surprised at all the characters that was chosen.

I think it was like they said during the MK stream. It seems the more competitive fighting games get the more you're starting to see character generalist(yay made up words) in the top 8s.

I won 3-1 against Kayane bu there was some type of miscommunication or problem with the stream. We were joking that I can never beat her no matter what I do. =p

Just wanted to note, though, that I think it's pretty interesting that both French players went 0-3, both newcomers to the Arena went 1-3, beating the French, SU and I were 3-1 going into the semis and both won our matches (and, hell, the score probably would've been 4-4 had we played another game), and Hawkeye and RTD were both undefeated going into the semis but lost to SU and I 3-1. Also, we both ued more characters than the other players this time (4). Senseless symmetry but cool nonetheless.

All of those guys know I love them and that they make these trips. We had lots of mushy moments...except for Keev (who disappeared).

LostProvidence said:
We had lots of mushy moments...
Click to expand...

I like how you analyze tourney results LP (/notsarcasm)! Crazy how 1st and 2nd from Anaheim got 7th and 8th here. Just shows how randomly things turned out.

Anyway, gonna do my shutouts when I get home. Also, I play Viola once and get nearly triple perfected by RTD and that ho gets a spot next to my name in the results thread!

And thanks Sora. I really wanted my revenge from Anaheim too haha. Oh well, at least I was close. PS, if you didn't get a chance to see my match vs Keev, you HAVE to watch it.

I think you'd like it more if I explained a lot of the 'random' shit I do. =p

Does anyone know where we can see the videos at?

You need an HD pass to watch the VODs.

EDIT: Pass is $5. If you enjoyed what you saw, support it.

I think the VODS will be free to view on the MLG site after a while because that's how they've been doing it so far. If you don't feel like waiting, buy the HD pass like Malice suggested.

Oh yeah, anyone who heard my shoutout to my pregnant dog, she had her puppies today. =D

LostProvidence said:
Oh yeah, anyone who heard my shoutout to my pregnant dog, she had her puppies today. =D
Click to expand...


What kind of dog is she?

Good stuff to LP getting 1st, Something-Unique getting 2nd, & Hawkeye getting 3rd. Good work there guys.

I'll have to wait for the free vids. That match between SU and Keev was nuts, especially with Ezio kicking some ass in the final round.

Dragkonias said:
I was honestly surprised at all the characters that was chosen.

I think it was like they said during the MK stream. It seems the more competitive fighting games get the more you're starting to see character generalist(yay made up words) in the top 8s.
Click to expand...


"Generalist" is an actual word, believe it or not.

Keev picking Ivy was the biggest shock. I guess the saying is now "If it's not broke, beak it!" LOL. Shocked both he and Kayane didn't do well.

Congrats to LP for winning it! Extra credit for rocking Leixia at the Arena, even if it was for just one game. But you know you and I have to do a mirror, right?

Great matches overall! I know I will have my hands full in Raleigh!

Force-Destruct said:
I'll have to wait for the free vids. That match between SU and Keev was nuts, especially with Ezio kicking some ass in the final round.
Click to expand...