I don't know much about Elder Scrolls, so I don't have anything to say about it as a recreation, but it's a great CaS in and of itself. I'm a big fan of elemental-type characters, whose physical embodiments are made of natural phenomena, but I find them technically challenging to make in CaS as you often have to think out-of-the-box in terms choosing parts that make for a convincing CaS. In this case, fire elementals need to be shiny and radiant, which the shapeshifter's skin texture lends itself well to. All that was left is to slap a fire sticker on to it, color everything appropriately, and you have an elegantly-done fire elemental. Great work!
Click to expand...

Heh... well, seeing as you're not the only one to express confusion, a quick reference: 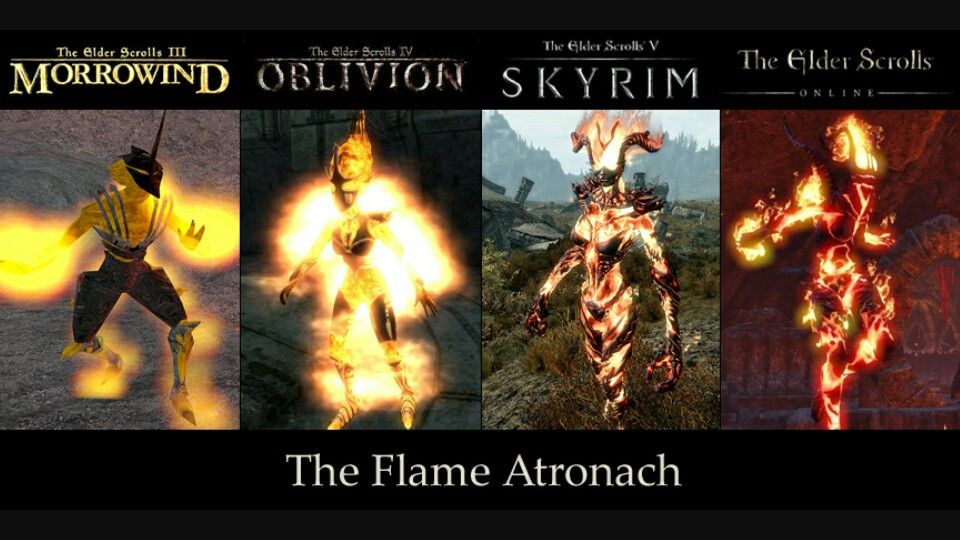 Atronachs are summoned creatures, and come in two other flavors, "Frost" and "Storm," with the Flame version generally being the weakest of them.
I was mostly basing it off the Skyrim iteration, though I'm keenly aware that the chestpiece is all wrong in that regard. If I'm being perfectly honest, it feels a bit low-effort and I initially wasn't going to bother, but the idea wouldn't let me be. The biggest nuisance is, I wanted to use the "water" texture on the last page to simulate more of a magma effect, but the chestpiece does that stupid "restricted color palette" thing and I couldn't use anything between pink and yellow (no red-orange). Ah well, I appreciate the kind remarks anyway. 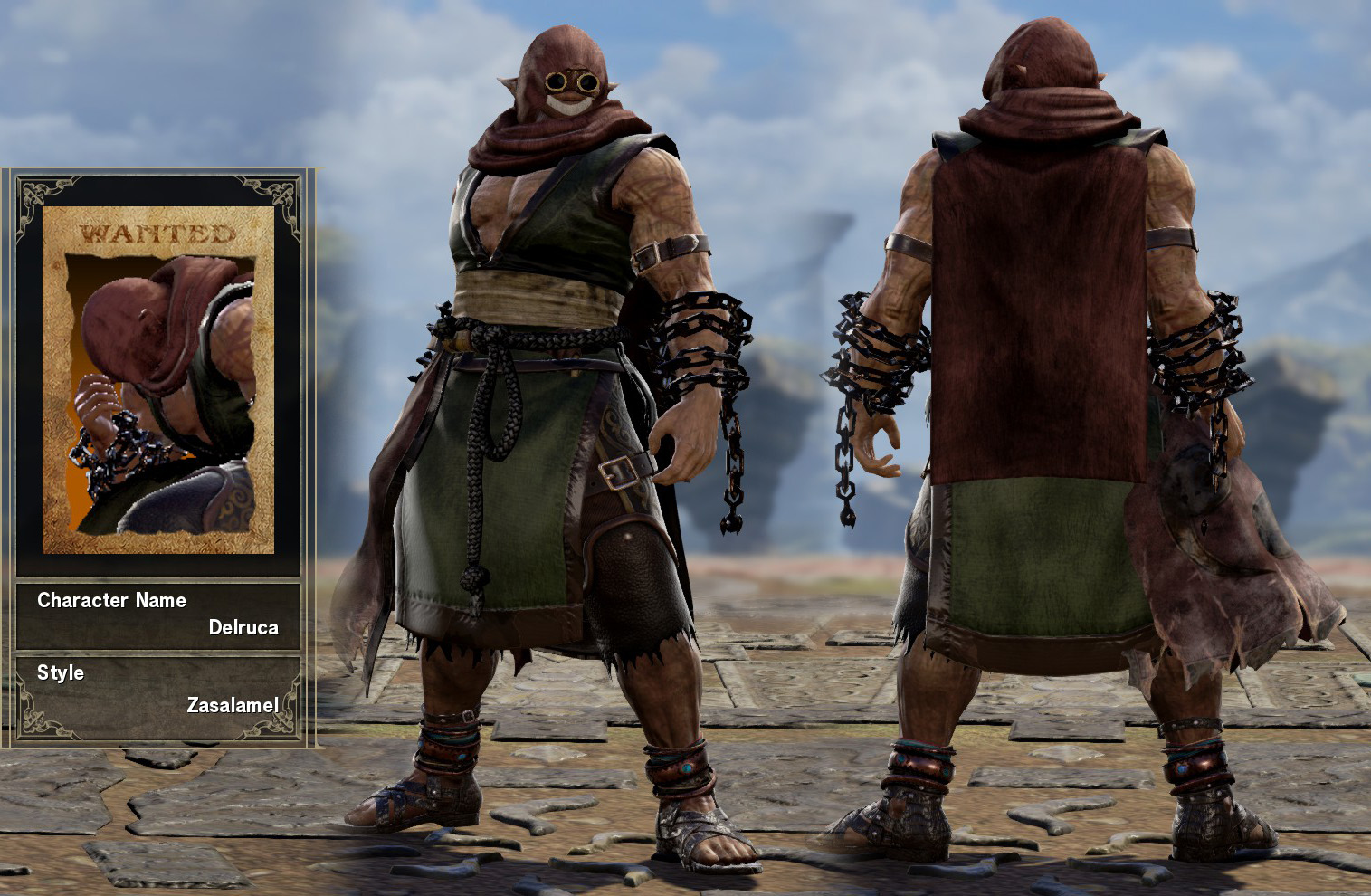 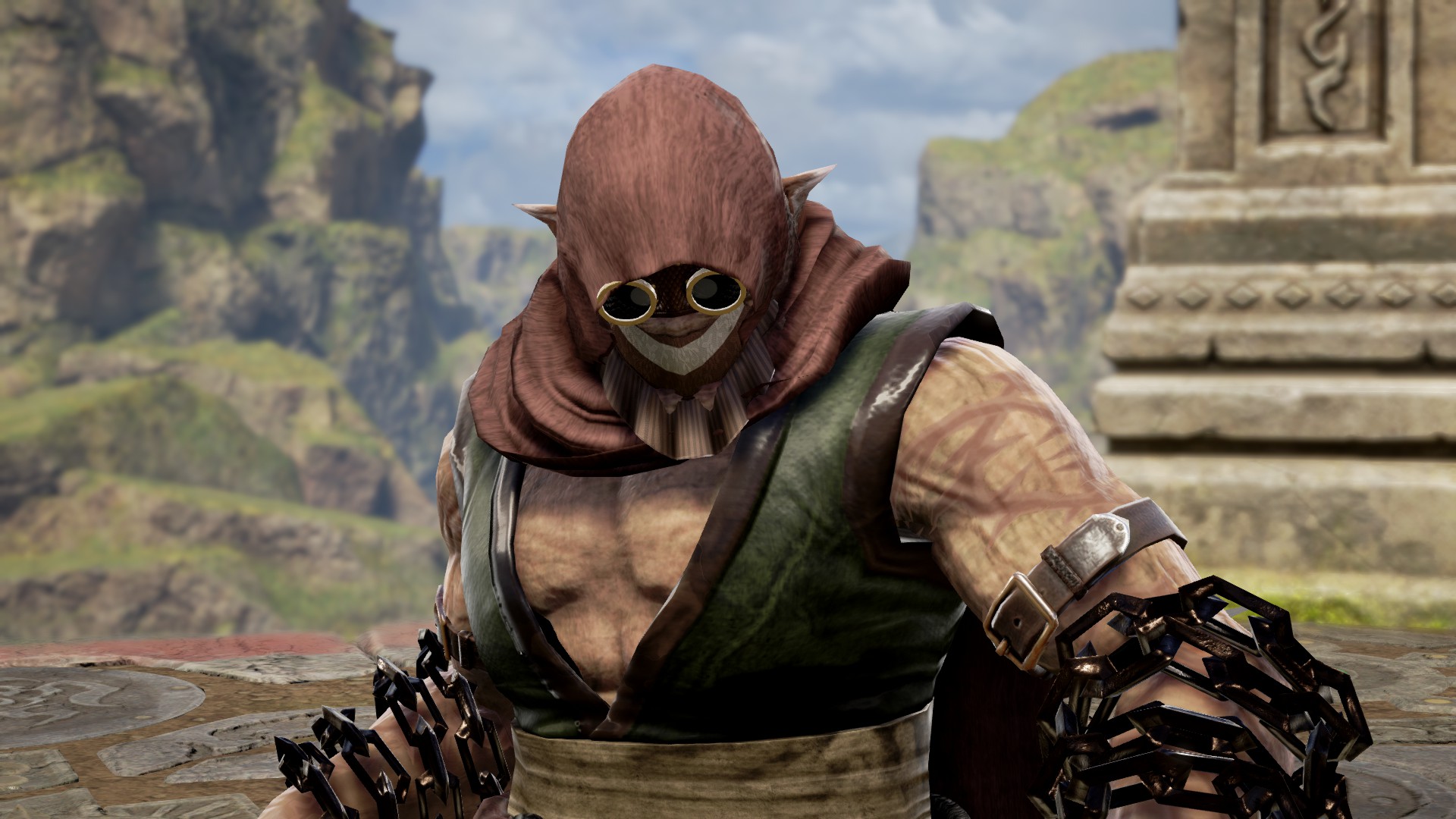 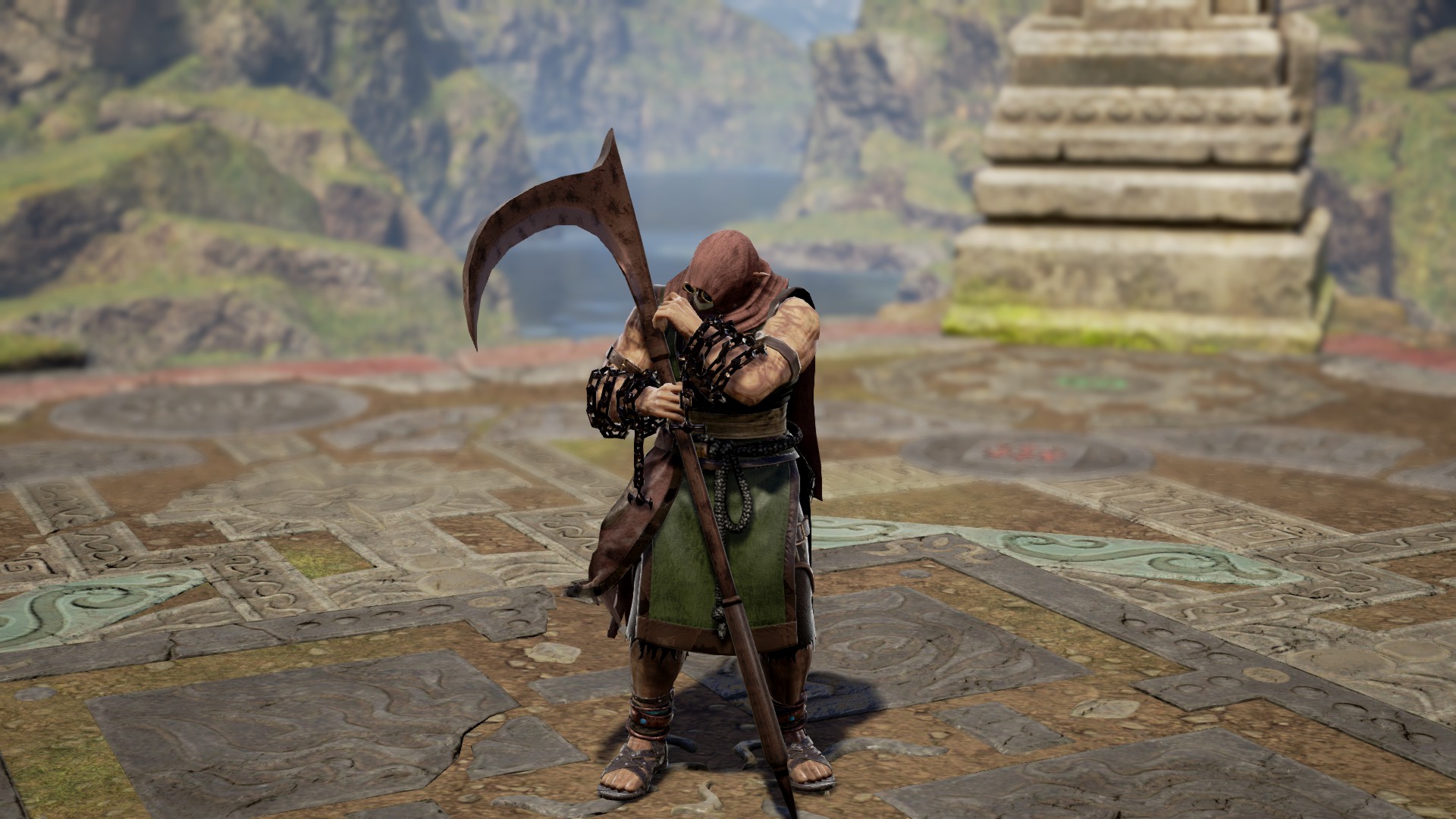 His hand trembled as he held the broken mask. White flakes crumbled from the crude jester's smile, powdering his fingertips. A false smile, one he chose to wear to set others at peace, in the hope he could find his own. "The Grinning Goblin," the children called him, cavorting playfully around his knees. A little teasing he could endure, to hear their laughter. Should they see his true face, their laughs would turn to shrieking, and the village would run him off. Just as the last one had. Just as the one before that. Glass cracked, blood leaking from his palms as his grip tightened on the wrecked faceplate he held. Goggles to hide his soulless eyes, a mask to hide his perpetual snarl. Another home, lost.

Delruca looked up at last, black eyes fixing squarely on the foe who'd struck him. The remnants clattered to the ground, and in their place he lifted an old scythe - as rusted and worn and tormented as its owner. "Come then," he growled, deep voice a quiet rumble, "finish what you've started. Let's make an end of it." 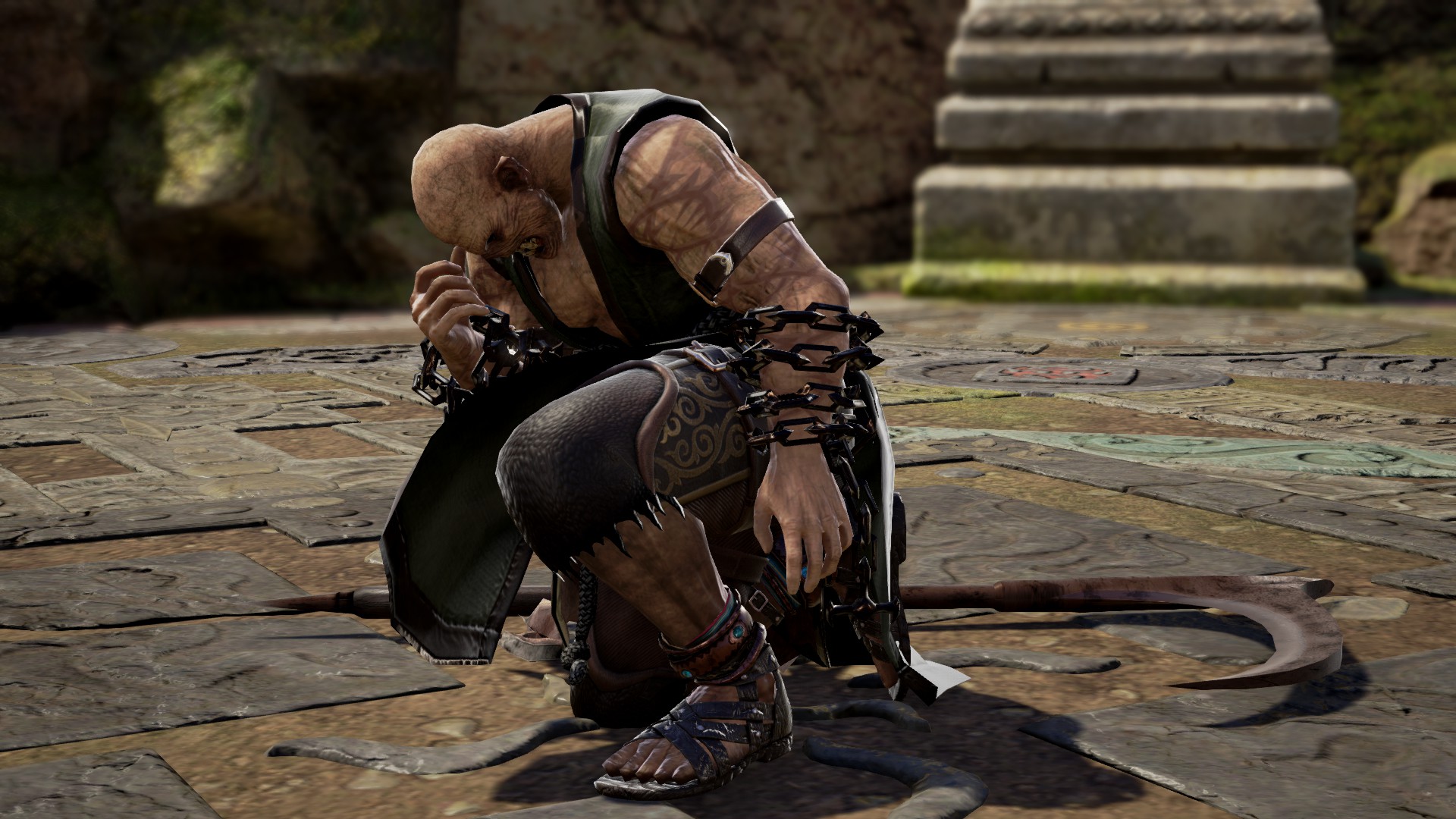 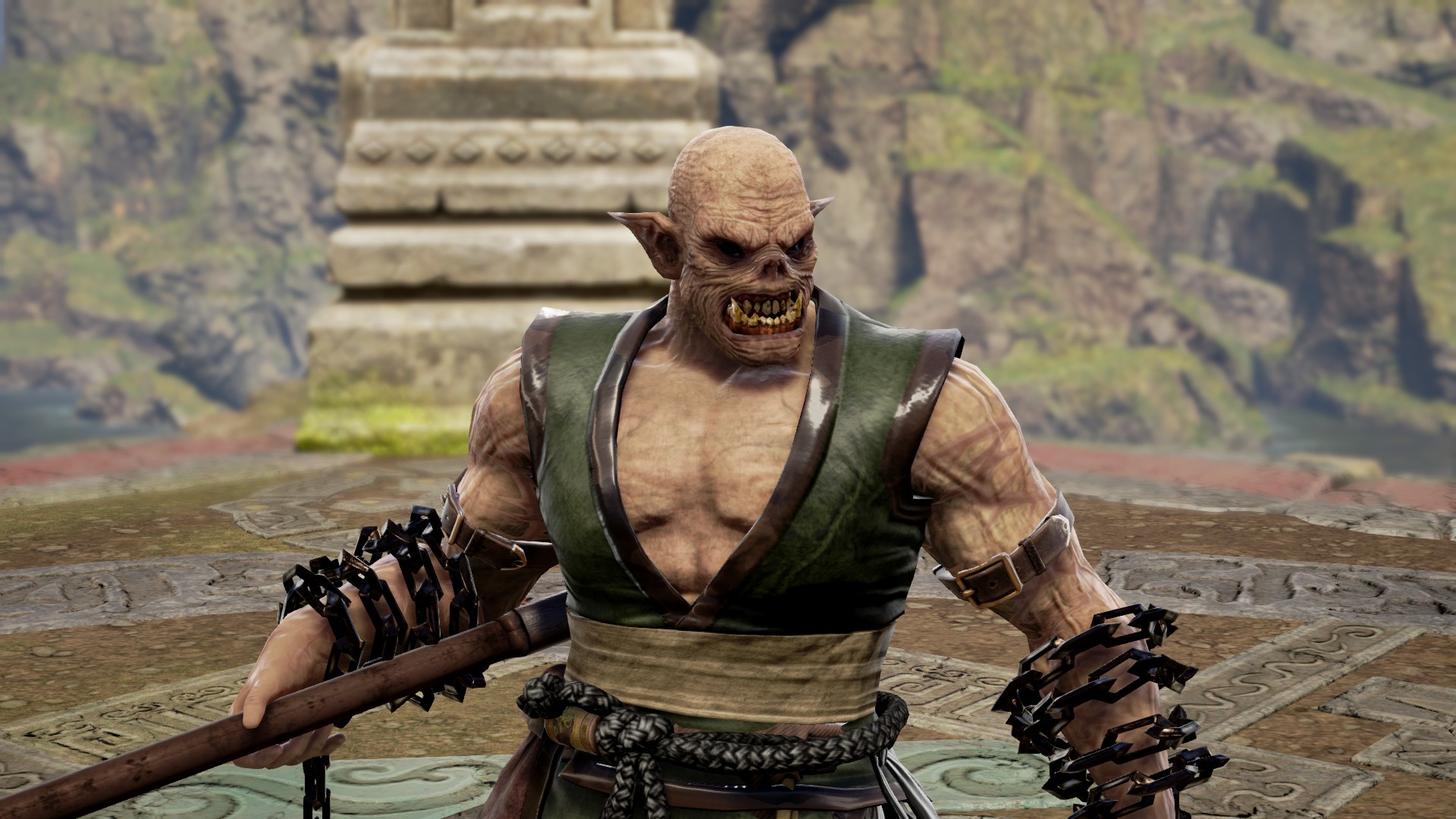 Pretty neat and nice work with Delruca ;)! The face cover is cleaverly done using different ExEq ( using engineer googles and emil face I presume ) and in combination with hood. His other gear options also work well together and really make him look like a lone traveller with most unfortunate luck considering circumnstances. The colours are also lively realistic looking, the proper balance between well shaded colours of green and brown together with other minor colours forms a nice wholeness which is a delight to look at :). The crude, old and rusty looking scythe fits him also well. The small backstory you wrote makes him more credibility and viewer understand his theme and concept in depth through it.

Really nice work with him, keep up the good work ;)!

Herr-Krieg said:
Pretty neat and nice work with Delruca ;)! The face cover is cleaverly done using different ExEq ( using engineer googles and emil face I presume ) and in combination with hood. His other gear options also work well together and really make him look like a lone traveller with most unfortunate luck considering circumnstances. The colours are also lively realistic looking, the proper balance between well shaded colours of green and brown together with other minor colours forms a nice wholeness which is a delight to look at :). The crude, old and rusty looking scythe fits him also well. The small backstory you wrote makes him more credibility and viewer understand his theme and concept in depth through it.

Really nice work with him, keep up the good work ;)!
Click to expand...

No Emil face, just a 'white brim' with a stripe pattern sized and rotated appropriately. I did try Emil but couldn't get him to work right.
As a CAS, I'll admit Delruca is pretty plain, but I wanted to try doing something a little different and ended up picking an Orc for the base. Story popped into my head soon after, about a "good guy" orc who just wanted to fit in with a local village, live his life, and be a decent dude. Layer in a bit of that Gentle Giant trope, and then "what happens when he's found out," and well...
Originally I was going to do a few more screenshots where we see who came after him, picked a fight, broke his mask, etc, but in the end decided it was more fun to leave it a mystery.

On a completely different note, I've seen those fan-arts you commissioned for some of your CAS and it got me thinking I wanted one of Rensa as well. As fate and fortune would have it, I found an artist over the weekend, and voila: Artist is https://www.deviantart.com/thed4rk1ord
Pretty happy with it overall, though I'm still trying to get Rosa to sketch her as well.

Still to come, two more 'Knight' characters, and perhaps a couple others as well. Been trying to think of something fun and different for a Lizard, but keep drawing a blank.

Nice artwork, some issue with perspective in the cleavage tho :)
I can't wait 2 see Rosa's sketch
Last edited: Mar 25, 2019

I see your points and visioning with Delruca. Sometimes simple can also be very good and we can´t pull off Mona Lisas of CAS everytime now can we :)? Well, Vilarcane could, but see my point XD? As for your art comission, looks very good indeed but like Viralcane pointed it out, a little bit of perspective issues. Nevertheless, shows your passion for this business By going all the way to ask an art comission of your character just like me :). That already speaks for itself ;). And like Vilarcane, can´t wait to see her sketch as well as what you will come up with next on CAS.

Yeah, couple things are a bit "off," but for what he was asking ($) vs the amount of detail in her design (and how fast he worked), I wasn't gonna nitpick too much. Actually felt a little guilty asking anyone to draw a character with that much going on and was happy enough with the results. As a character, she's all but replaced Cass as my favorite butt-kicker.

I actually have no clue how much it pays to do a commission, and how you actually get paid (paypal ?).
I mean i could take CASmissions anyday and get rich (or die tryin' :)
Hell, i could even take a drawing commission, but that would be a B&W sketch for lack of time...but a good one :)
Has Rosa an art gallery somewhere, on DA or elsewhere ?
Did you pay him with soul points then ? btw, i don't know if they changed it, but man libra of souls stealing all your hard-earned money for travelling between missions really discouraged me, such a poor design decision, unless patches got rid of it.
I still haven't finished it...

Well, the prize depends on pretty much on what do you exactly want the artist to draw for you, how detailed you want it, is it going to be a holy body work or just chest drawing etc. Of course, the prizes vary depending on the artists themselves and how skilled they are. The payment usually happens through paypal with cash or if they accept it, with DA points. I know artist who basically do it to earn their money for living and some for profiting for something they are good at. I know an artist in who is known as Flowerxl and his base prize for a comission is about 140 dollars, so.....yeah, even I´m not that enthusiastic to see my creation come to live XD.

Well, paying for travelling in Libra of Souls isn´t that bad depending of course how far you wan´t to travell. In highly Place populated parts of the world map it isn´t that painfull, but I also start seeing red and have my blood pressure rise up a couple of notches when I try to travel in Africa XD. Or when you want to travel through mountain and you see the traveling prize rising to seven digit numbers XD So yeah, in that sense I agree with you VC.
You must log in or register to reply here.
Share:
Facebook Twitter Reddit Pinterest Tumblr WhatsApp Email Link