Zasalamel (ザサラメール, Zasaramēru) debuted in Soulcalibur III as the lead antagonist and returned in Soulcalibur IV and Soulcalibur VI. A man of ancient origin who is forced to reincarnate every time his current life ends, his main goal is breaking himself from the circle of reincarnation and attaining a peaceful death. He seeks this end because, after countless lives, he no longer finds joy in living. In Soulcalibur III, Zasalamel's alter form is Abyss.

This magician lives eternally, renewing his body each time his life ends, drifting endlessly through time. Zasalamel was originally born into a tribe that protected the holy sword. "It is forbidden to use this power for ourselves." This strict edict existed to prevent the holy sword from being used for personal gain. Zasalamel, young and talented in both mind and body, was not pleased by this edict. It was not that he did not believe in it, but if a criss were to occur, why should the tribe have to entrust their fate to those weaker than themselves?

In order to destroy this foolish tradition, he prepared to take the sword into his own hands, but the tribe discovered his plans. After crushing his arm as punishment, they cast him out of the tribe. The path of the warrior closed to him, Zasalamel was stricken with despair, but he eventually began the pursuit of ancient knowledge. What he sought was the art of reincarnation. He found this secret art-which many had sought and failed to obtain-within knowledge thought to have been lost long ago. After a long period of study and training, he obtained the power for his own and became a being that could cross the ages.

He could not have anticipated the great cost of this freedom. Every time he "died," he experienced a nihilistic feeling as if sinking into hell, and a pain as if his body were being ground into dust...

He had distorted the laws of causality set down by the gods and torn off the shackles of time. His body would bear the burden of the result of his actions. In exchange for obtaining eternal life, Zasalamel had lost a peaceful death.

He reincarnated repeatedly over many generations. In the beginning, he was able to stand the suffering of death. He had thought there could be nothing better than the joy of life. Over time, however, the joy he gained from life waned and the pain of death increased. Time was infinite. Anything he wanted to do, he could accomplish. Any enthusiasm he felt for living had all but disappeared many lifetimes ago, but he could not escape the eternal circle of reincarnation...

During one of his countless lifetimes, he took possession of Soul Edge in hopes of cutting the bonds between his life and this world, but he ended up as a servant of the sword. He was together with the sword until his body collapsed and the last of his life faded. Still, he returned once again to the land of the living. He then turned his hope to the spirit sword. Soul Edge lacked the power to take his life, but perhaps using something with even greater power...

With this thought in his mind, he returned to his birthplace to take the spirit sword.

When he reached his homeland, the tribe was gone. Whether by force of nature or by human hands, everything was gone without a trace. Soul Calibur, too, had disappeared... After reaching his current incarnation, Zasalamel tracked the whereabouts of Soul Edge from the massacres caused by the Evil Seed and Nightmare. He learned that the spirit sword had finally appeared, so he may be able to obtain both of them at once! It was the perfect chance. The cursed sword, however, had lost half of its body, and there was a seal placed upon it. The spirit sword lacked its true strength as well, having been infected by evil.

In order to revive the cursed sword, he lent his power to its evil will, which struggled for existence after having its body sealed. Zasalamel restored the azure knight to life. In order to aid Nightmare and increase the cursed sword's power, he needed to create conflict within the mind of Siegfried, the one who possessed both swords. Zasalamel searched out survivors of Nightmare's carnage and directed them towards Siegfried. The strong hatred and hostility that they bore would surely be enough to shatter Siegfried's will. If the cursed sword grew in power, then the spirit sword would also regain its strength. This, Zasalamel had learned from the legends left behind by his tribe.

"It should nearly be time..." After sending out his sacrifice, Zasalamel decided that it was time to move. When the cursed sword's great power flared into an Inferno, and the spirit sword swelled with its purifying energy to quiet its rival, he had to be there. When the conflict between those two opposing forces reached its peak, would he be able to use that ultimate power to achieve a final death?

This is it, he thought. This power will put an end to my cursed life once and for all! Zasalamel felt certain of it as he stood before the opposing swords' rushes of power. At last he would be able to escape this endless cursed cycle of reincarnation. But just then, a wondrous vision appeared before him; towering structures that seemed to reach as high as heaven itself and steel boats that flew freely through the skies. The birth of a plan for leaving Earth and striking moon ward then the achievement of that goal.

And the creation of new life, the province of the gods themselves! He was witnessing the future; the sum of all human potential. To Zasalamel, it was a revolution. For the first time in ages, the will to live swelled inside him. He had to be there when that vision became a reality! He had to see it happen! After returning to the real world. Zasalamel noticed the auras of the spirit sword and cursed sword were at a dreadful pitch. "Perfect," he thought. His close encounter with the two swords' natures meant that surely next time, he would be able to bend Soul Calibur and Soul Edge to his will.

Yet someone stood between him and that goal; a man of tremendous strength and will who had slept deep within the spirit sword, and was now awakened. The Hero King. To think that this legendary figure actually existed... "Fascinating," thought Zasalamel. Such a mighty being was a worth for to stand between him and his ambition. If the path he walked stretched to the ends of eternity, then he would build his life to come atop the Hero King's broken remains. 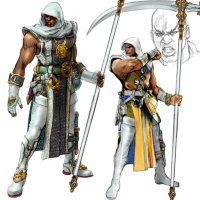 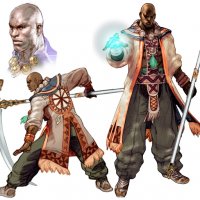 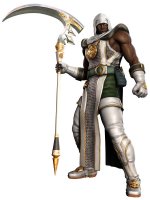 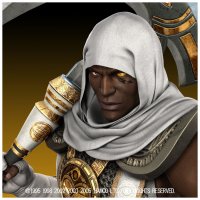 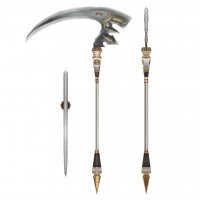 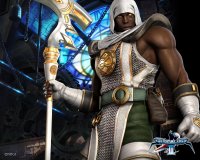 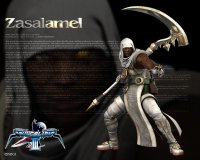 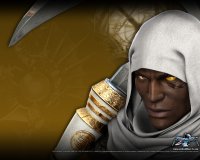 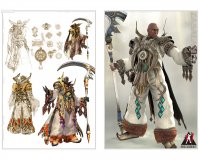 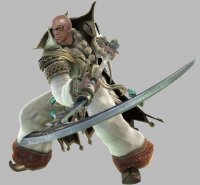 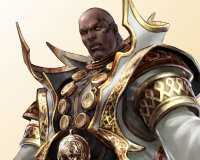 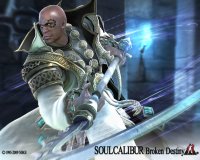 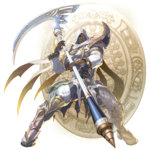