There was a slight chance that I might have decided to pick this up but that's definitely not happening now. This is far worse than the Tira issue as there are two characters being locked behind the wall and they are announcing this 5 months before release. I will do what I intended from the beginning and wait for the "Last Round" edition if I pick it up at all.
Last edited: Sep 10, 2018 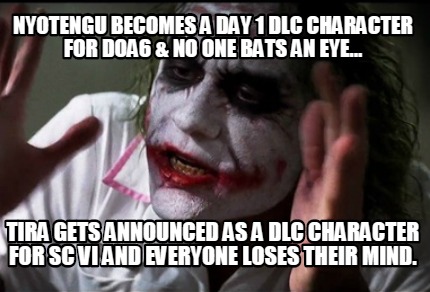 I saw someone blaming SoulCalibur for DOAs DLC idea. Like people just want to hate.

You guys know what a preorder bonus is right? It sounds like you don't.

Assassinate said:
I saw someone blaming SoulCalibur for DOAs DLC idea. Like people just want to hate.
Click to expand...

Optional cosmetic DLC that you didn't have to buy at all.

As a long time fan and somebody who's main is already guaranteed a slot (Helena) I was pretty excited for this, but if the DLC practices turn out like they did last time that'll be a bit of a turn off for me.

DOA6 TGS exhibition is about to start in 85mins.

d3v said:
Optional cosmetic DLC that you didn't have to buy at all.
Click to expand...

Really looking forward to this game, I do hope they keep the optional dlc though, really enjoyed the schoolgirl strikers set.

So the Dead or Alive Festival returns in November. Odds are we might see the new female character there.

I noticed this video wasn't shared yet;

The voice syncing is awful...but nice to see these three back.

Nice, super glad Mila is in!

Tina is looking pretty damn sexy and it's nice to see Mila back. I was worried that she wouldn't make the cut.

Can't wait to spend £180 on this game like i did doa5, hope they keep the dlc costumes super high quality.

TN releases optional costumes, that in no way affects the game, for 5 long years and that is bad. DOA5 is released in 2012 on the PS3 and with the PS4 out they decided to make a version of DOA5 for the PS4 in 2015 and that is considered bad. They added new content (free voices, cosmetics, and costumes among other things), (10+) characters, (free) stages, (free) patches, and DLC costumes, to a complete game for 5 years but everything they did is just the worst thing possible. TN even had multiple tournaments for DOA5. Is this not the support people love to claim fighting games need?

On the other hand if TN went with the SC5 route then people would be saying DOA was a dead game and TN didn't care about it. People would have had to wait around 4 to 5 years in silence until DOA6 was announced. Instead it was only a couple months. Not much support was given to the fighting games released around 2012 compared to DOA5. Now DOA6 reveals 2 DLC characters but that is somehow worse than Tira and the other 3 characters in the season pass. SC DLC characters are fine but DOA DLC characters are not.

Regardless of what TN does they will be damned if they do and damned if they don't. Free and paid cosmetics are bad. Being a bare bone game with missing game modes like recent games is bad. Upgrading an old game to a new console is bad. Having DLC characters like every other fighting game is bad. Supporting a game for 5 years is bad because it added too many new things. Those 5 years of optional content aren't free so that is considered bad practice.

It's a perfectly fine practice. They work to create something, and expect payment for it. Complaining you're not getting five years worth of content development for free seems like a much worse practice to me.

DOA5's optional DLC created for 5 years --> use logic and do the math. DLC price * 5 years and the total price is high = shitty practice
SC5's optional DLC created for 1 year --> do the math. Less content * 1 year and total price is low = fine practice
DOA6 has DLC characters = bad
SC6 has DLC characters = fine
DOA6 has cosmetic DLC in its season pass. Will that be a bad practice? Is SC6's cosmetic DLC in its season pass acceptable?

What's the difference in practice when every game is doing the same thing? The only thing DOA did different was support the game for 5 years. It's fine to not like a game but there is no need to throw out logic and become hypocrites. All the complaints about DOA can be applied to every recent fighting game.

It'll be interesting to see the final outcome for DOA6. I am excited for it nonetheless, but I do hope they patch up the problems they had in DOA5. For me, DOA5 was not that great, but all the others before that were excellent, just that...DOA5 felt rushed.

Here's to hoping for DOA6 being a great game!

Christie is coming, should be reveal soon during PGW