No more RE cancel for Raph...

we're waiting for a full translation

This reminds me of scV ….

The problem is that rest of the cast got mostly buffs (even IVY and MINA)… and Raphael was the most hit considering nerfs to buff ratio.

P.S: don t care about RE cancel.
Do care about WRB and 6B as defensive tools.
Also seems they nerfed ALL low pokes for no reason.
Last edited: Jan 15, 2019

I should ve known better after scV.

Best quote is Always the same:
Tekken was worse at launch than scVI but "balance" made tekken better and sc worse.


Usual immotivated knee jerk nerf to raphael… but they will get what they deserve looking at the dumb buffs they made.
Last edited: Jan 15, 2019 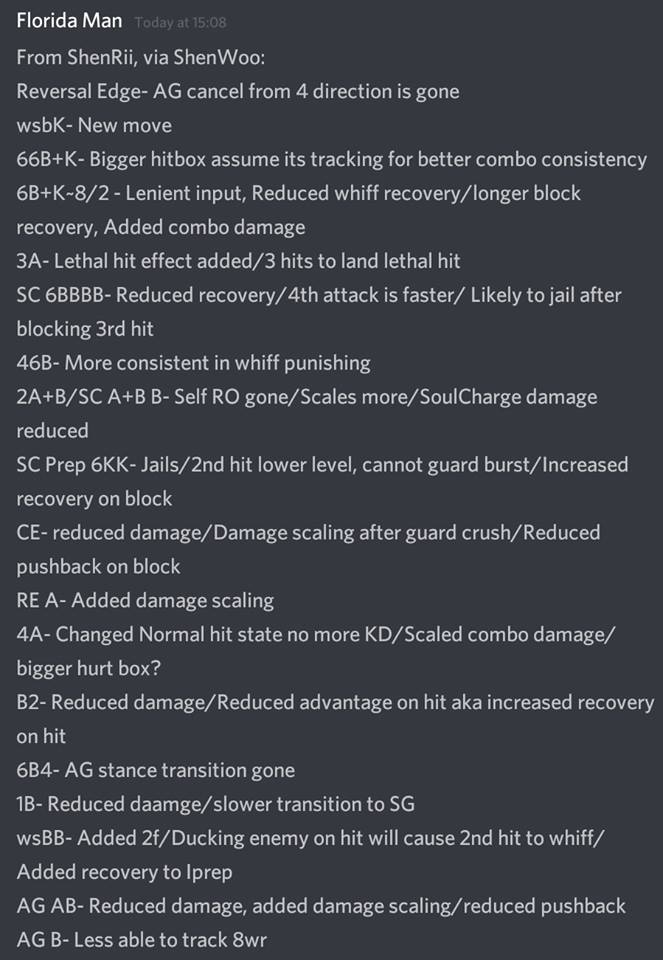 SO full nerf to AG, 4A and wrB while buffs are fix mostly
Way to knee jerk nerf a character

Could it be the most serious nerf in Whole soulcalibur history?
Last edited: Jan 15, 2019

Ignore the above, a few things about that are wrong. Here are some more accurate notes (not by me):
https://docs.google.com/document/d/1sVATQSwNI0C2a4gm-sj11LAjbHWr4ifBl8_4hYBLq94/edit

Obligatory copypaste for the lazy:


3B for all characters (buff)

kinda confused about the 6B4 change. so are we still gonna be able to go into AG from there?

I think it means that AG won't move as far back when done from 6B, but we'll find out soon.

All in all Raph got buffed. Check discord for all my findings.

iWR Bk now carries wall combos to w! or RO the other side.

RE cancel still in, and only kicks in IF IT WILL WIFF. So 4 into B hold is OS.

WR BB46CE still in. Forgot to see if first 2 hits are still NC, but if not - still combos off second hit.