How to port Soul Calibur III: Arcade Edition to PS2

hmm you said that the ending stages in the Arcade version were less glitchy, does this mean they have proper collisions so we can use these as playable stages? :D

Hmm I need to find where the modes are stored within the .OLK I think it's in 'File 3' but thats just my guess. I want to replace a mode with 'Legends Mode' which was the Arcade exclusive mode.
I think this is also possible on SC2 aswell since you could theoretically replace a mode with an existing one in the .OLK file Also I have the ROOT.OLK for the Arcade version of SCII (Version A)

I had success when using your tutorial for swapping stages, but instead I used it for bringing over the Arcade stages from SCII to the Console version (in sc2) I ran it in PCSX2 and it worked like porting over SC3AE stages to SC3 for PS2! :)

I found that the stages were slightly better looking (as if they had more polygons) and some of the 3D objects in the background slightly differ to the ones in the final version. One example is that the statue in Sophitia's and Cassandra's stage was different (it was in a different pose and looked larger) also some textures were different too.
What I havn't tested yet is bringing over the Arcade Character models to the console. Since it ran on the 'Namco System 246' the models would be abit more polished than the console versions, infact it wouldn't suprise me since the stages were noticably different (in some areas of the stage)

Soon though I will be getting a new Processor for my PC so that I can run PS2 games at full speed (atm I have a processor @2.3 ghz and that doesn't cut it LOL!) XD When I have my new processor I will post some youtube videos about it (mabe a comparison between the 3D VMP files?)

Anyway enough about SCII :P this is the SCIII forum! I guess I got abit carried away... -_- I want to thank you Falcon for making this awesome tutorial! without this info I wouldn't of been able to get my hands on the Arcade SC version of the ROOT.OLK ;)

*Update!*
I managed to port over the lifebars from AE, here it shows me running the game in PCSX!
if your wondering what file it is, it's either File 1.unk or File2.unk in the File3.OLK section (AE Root.OLK) you then need to extract them and replace them with the ones inside the PS2 Root.OLK :)

*Update!* - I have now realised that it's either File1.unk, File2.unk or File3.PKG in the FILE3.OLK section that is causing Ivy to crash, because I only swapped those files and Ivy gave me the 'TLB' error I guess I now just have to replace her other AE files and she ill be playable now! I havn't tested Yoshi, but I can guess that these AE files have some crucial files and without them we get errors because in reality, we havn't 'Fully' replaced the movesets so they are compatible. 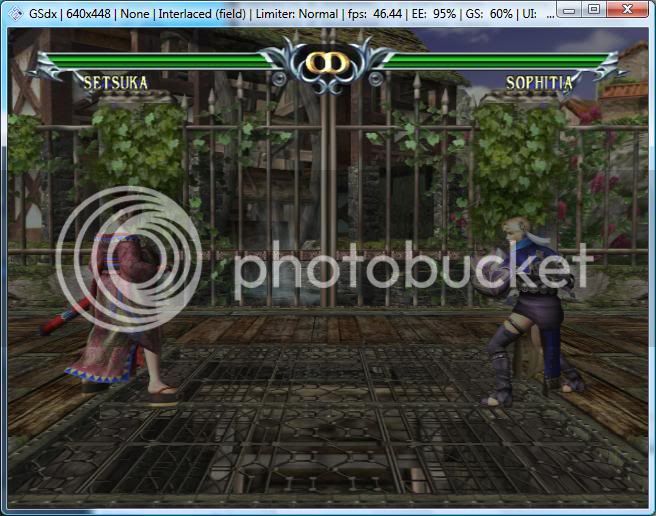 You're getting me excited <3

Nice find! But what exactly are in File3.OLK? The other OLK files also remain a mystery...

Awesome, man! And by the way... you say that you're liking SC3 more in your signature? Well, I bet that's because of the AE gameplay, isn't it?

EDIT: I think you meant to say File6.pkg, not File3.pkg.
EDIT2: I worked with the files you said, but there's still the TLB Miss error with Ivy. Anyway, I found out that File6 is the file that contains what dee4doa found. Swapping the other files he listed will only prevent some sound effects from working. It looks like some other file needs to be ported over too to get Ivy and Yoshi to work.

So this is pretty much a trial and error method then eh?

Hmmm I gues when I get my new gaming PC this week, I will test some more stuff out. Also I replaced the whole of 'File2.olk' in the main OLK directory and it had wierd side effects, It caused the characters to instantly teleport outside the map and cause it to 'Ring out' mabe these were the files used that needed some of the Arcade versions of the stages to work properly?
Anyway it's cool that were finding all this stuff, I am realy convinced that the Data for the 'Legends Mode' is within File3.OLK aswell as the files to make all the movesets from AE compatible.

The only main difference I saw that the AE OLK had was that it had a PKG file (In File3.olk) called 'File119.Pkg' which was missing from the console OLK version. I'm convinced that this contains all the data for 'Legends Mode' and that we would need to find the other console modes to replace it with so we could make it playable with a file swap ;)

I don't believe that File2.olk is needed for the AE stages to work. I ported over some of the new AE stages and they worked perfectly without it. Also, in the topic for the old AE port some of File3.olk for the PS2 edition is documented.

Ian said:
So this is pretty much a trial and error method then eh?
Click to expand...

Until I get my new gaming computer, I will test out some stuff. Until then there isn't any updates LOL ATM my computer emulates Soul Calibur III at 30-40 fps on speedhacks -_- my new PC will be able to run games at full FPS! :D

I've got news! In File3.olk, I've found something. First, File38.pkg contains some data (but not all) for the character selection menu. It also needs some other file to work properly though. And there's also File47.unk, which is another image that shows the ADX logo. I think something must also be ported over from File2.olk.

Update! In File3.olk, the file that stops some sound effect from working is File2.unk. File1.unk causes a new graphical effect on the "Battle X Fight" thing that appears when a battle starts. I've also got some bad news though... I tried putting the whole File2.olk and File3.olk and no succeess in fixing the TLB Miss and the AE character selection screen. And putting the latter file will cause the game to freeze when starting a game mode, because it only includes the AE modes, but the menus are elsewhere on the PS2 version, so they were still there. Also, File1.olk and File4.olk have exactly the same size and files as the PS2 version, so they change nothing at all in the game.

Sorry about the flood, but I've found out more stuff.
1) I finally realised why Cervantes has two movesets in the game. Inferno used Cervantes' moveset, but with never shooting with the gun (as Soul Edge doesn't have one), and after I put Inferno's moveset on Cervantes I've always wondered why they took those moves off. Now I know why, so take a look at the first post to check the update to the file list.
2) After putting a file (a stage, to be precise) that allocates a lot of space on Ivy's moveset file (more that her AE moveset) and putting Ivy's moveset back, I realised that the reason why she crashes the game is the space allocation process that happens when you put the new moveset. In fact, the side-effects of her moveset were a lot different now. This probably means we have to find a particular way to put the file in to make her work. That should also work with Yoshimitsu, of course.
3) File1.unk in File3.olk from the AE doesn't work correctly in the PS2 edition, as I don't recall seeing any new effect like that in the AE (I saw lots of vids of it).
4) The Voice.afs file from the PS2 version doesn't work with the AFS explorer, however the one from AE does! I love listening to the voiceovers with it! The characters' order is the same as the OLK file and first are the japanese voices, then the english ones.

For #2, what was the new side effect?
And for #3, what is the new effect? I'd like to see what they look like.
I'd also like to thank you for finding out so many new things in modding this game :)

2) If you allocate more space after you already put the new AE fighting style, the TLB Miss will occur before the battle starts, at the loading screen. If you put it only after allocating the space, the game will freeze even in the emulator. I'm going to find out more about it.
3) It's tough to explain, all I can say is that it's a little weird.
And, of course, you're welcome!

UPDATE: Now that's bad news. I put a stage in Ivy's moveset file and then again her original moveset from the PS2 version. The problem is exactly the same!
UPDATE 2: It probably depends on the file size being odd or even, or something like that. I'm getting convinced that it's a bug in the game that is activated with this process.