How will the new timeline diverge from the old?

It doesn't even necessarily have to diverge, either. It can just simply not skip, and ease us into the SoulCalibur V era. We'd get new events inbetween, but that isn't a divergence, if everything still transpires in the same way in the end.

Ukkesh said:
Do you mean scvi?
Click to expand...

And where was this said? I've been following this game closely and I'll be surprised if I missed that.

Well, it's pretty clear now that this is a new, rebooted timeline that will diverge its story. I just wonder how it will.

It's pretty clear to me that Azwel's major story involvement will be relegated to Libra of Soul, which, per the trailer, is non-canon. So kind of not really. Grøh and his confrontation with Azwel (as well as Zasalamel, helping your custom character overcome the Evil Seed, who is also opposed to Azwel) are also seemingly contained to Libra of Soul. Unless Azwel also shows up in Soul Chronicle, which is the canon representation of the story, and does similar things than we've seen in the last two trailers, then nah, the timeline is still not diverging. As far as we've seen, Grøh is some guy who senses the Evil Seed's presence in Kilik and challenges him, and if that action in and of itself doesn't change anything, which it doesn't seem like it does, considering Grøh's personal story is before Inferno vs. Xianghua, and that's still going to happen, well... I'm not sure what other conclusions can really be drawn here.

None of us really know until the game comes out, to be absolutely clear. But from what has been shown so far, it would appear that the timeline is not diverging, for the purposes of continuing on to the next game in the series. It could be, as there are pieces in play that could possibly change the outcome of certain things, but there isn't enough information to say that it absolutely will be, either.

It's pretty evident that characters appear in both modes, so...

If we're also assuming that the line under Grøh is Azwel, his involvement also happens before Inferno vs. Xianghua, and is equally not important nor diverging from the events of the original timeline. I think the biggest thing that you're seeing differently from me is small events meaning things are diverging, while my perspective is more on the big picture. As long as all the main story beats still happen and the outcome is the same, and no characters die or get set on other paths, that sort of thing, we're not diverging from the original timeline. We're getting new inbetweens, new information, new background, and that sort of thing, but that in and of itself is not a divergent action.

Don't forget, Tira's backstory has been changed so that in itself is a diversion.

They left out the part where a normal family adopted her, but they didn't say that that didn't happen. The Evil Seed happened, threw the Bird of Passage into a frenzy, and Tira was set free and became a wandering assassin. That's exactly the same as the original timeline, beginning and end. Omitting details of the inside doesn't mean it changed. And omitting that part doesn't mean we won't see it in the game, either. The long and short of this argument is still, wait for the game to come out and play it, and only then will we have an answer.

Also, Okubo flat-out stated SCV put the series on thin ice. If SC fully recovers, we sure aren't ever going back there. And he also said that not only are they revisiting the old, but they're changing it. That in itself is a new timeline.

None of those differences are notable enough to be important, and can be explained away as technical changes (to help differentiate clones) and shortcuts taken due to the limited budget of this game. Seriously, some people are just hellbent on selling this new timeline thing, when it's quite obviously just a retelling of the same events but with greater details. Okubo himself has stated that this is the SoulCalibur that would have been made back on Dreamcast if we had today's technology back in the day. This is the story that they wanted to tell, but couldn't, due to limitations. Minor delineations are not significant. It only matters if the big picture changes. And the Tira thing, I just explained, and won't repeat myself.

Yeah, we're totally going back to the era that by Okubo's own admission had almost killed the series after this...

Also, are you seriously trying to tell me they're going to introduce all these new concepts like Grøh, Azwel, the Aval Organization, Zasalamel and Tira appearing before they originally did, and more, but make all of that non-canon?

Zasalamel and Tira appearing early doesn't change anything. It really doesn't. About Grøh, Azwel, and the Aval Organization, it remains to be seen. They're mysterious, to be sure, and we won't know what they're about until we play the story, but it is quite possible that both Grøh and Azwel meet tragic fates in this story, and don't influence the future at all, if that was their goal. And, to go back to December for a moment, the Aval Organization could still turn out to be the same society that Z.W.E.I. hails from, you never know.

SoulCalibur V's problems were rooted in that the game was incomplete, not in what it brought to the table. It's unfair to claim otherwise. We don't really know what the real reaction would have been to SoulCalibur V if it was as complete as SoulCalibur VI seems to be. It's not the timeline events of 1607 themselves that are to blame for being a problem, it's that it wasn't implemented well. Anyone would hate anything as incomplete as SoulCalibur V was, especially if it was replacing something you already knew and loved without adequately explaining itself.

Either way, I don't think we have to worry about this for a long time to come. SoulCalibur VII, continuing in SoulCalibur VI's footsteps, would likely cover the stories of SoulCalibur II, III, and IV. Then, if we're still on the path of success and the series is still going, SoulCalibur VIII would then possibly pick up and actually play out the events that happen after SoulCalibur IV, instead of timeskipping, or if it did timeskip, in a devil's advocacy perspective, it would still manage to do two things, sense permitting. It would explain and flesh out all of the new characters and give them full stories, and it would also not cut characters without explanations, or even perhaps not even cut characters in the first place.

No one pulled the phrase "It's a reboot" out of thin air. Okubo has stated that maybe reboot is the wrong word to use, but regardless it is a New Timeline and it's continuity is separate from that of Soul Edge to Soulcalibur V. Reboot, Soft-Reboot, Retcon, whatever you want to call it, it's a New Timeline.
Click to expand...

Oh yeah... no. They are not returning to SCV. I say that with complete confidence. When that's the game that they freely admit nearly killed the series, they won't go back to it or anything like it. Also, if this was "the story they always wanted to tell about couldn't", I will only believe such a claim if they pull out concepts of Grøh '98. No one ever wants to see Patroklos again. Just imagine the reaction they'd get if they did this:

I liked Natsu and Leixia...
Not trying to be funny but isn't this detailing the thread a but, to me it just seems like a back and forth argument. Though I will say Azwel is more than likely canon as a part of the aval organisation. I doubt we will see anything from the scv, other than viola, zwei and possibly elysium.

So, about that Tira killing her foster parents thing... 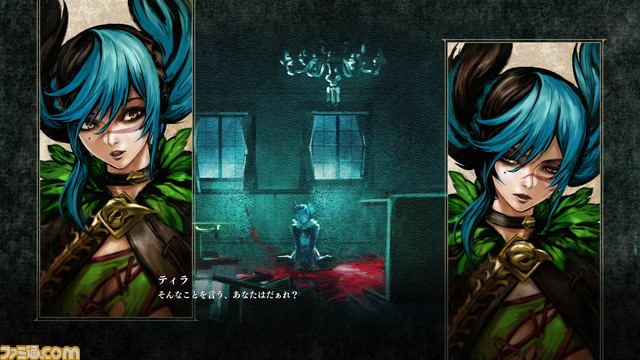 Actually, I'm not sure if that's it. Why would she be wearing that costume?

I think that Kilik would become next Nightmare at the end of SCVI and his weapon would get completely corrupted and will fuse with actual SE. And that would change everything in terms of story in the following games (and also would make stuff more interesting).
H

Time skips don't work in a game like Soul Calibur. The reason is such: Because Japan can't figure out a way to age their anime women. Imagine a 50 year old Ivy with boobage sag - it ain't gonna happen. Plus, you then have to deal with facial wrinkles.

Not only that, but the fashion of the time was constantly changing and guns game into use and would become more common as time went on.