Calibur at my place tonight, all night. PM for address/phone#

Esom! Why does ZWEI have a lame low that stuns on normal hit :(

Shameless self promotion here, but for those of you in the Minneapolis/SouthEastern Minnesota area. I am holding a tournament for SC V and TTT2 on September 15.

If you have questions or comments, let me know on the forum. 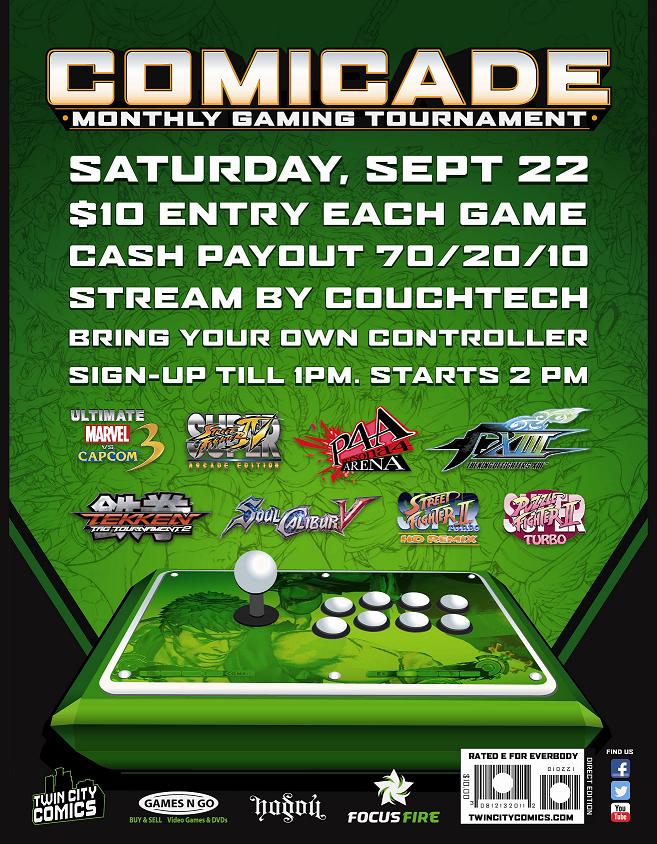 I'll re-post most of the info for casuals here just in case someone didn't catch it in the other thread:

Games N Go in Rosedale has fighting game casuals usually Tuesdays and Fridays starting at 4-4:30 ending at 8:30(or earlier depending), you can usually find someone up to play for them to set up SCV for you if you get there within the first hour or so.

A friend of mine and/or myself are usually there once a week(mostly Tuesdays for me, sometimes Fridays, sometimes both) playing SCV, so there's usually a setup then.

Tournament group: This is the one that is the most useful for knowing when casuals are on or not + tournament info/postings.

Comicade III will be happening this Saturday. Last month we didn't get too many people; I hope whoever isn't going to NEC can come and hang. I'll be at casuals tomorrow if anyone wants to come and get some practice in before Saturday.

(Text taken from testyourmight.com and Shoryuken.com)

When: Saturday, February 16, 2013.
Where: Twin City Comics, Columbia Heights, MN.
Discounts on store product changes monthly!
Parking behind the venue or across the street in the open lot.
Food and drink available at the venue or within walking distance.

$5 venue fee // $5 per game entry fee // spectators=free
Registration begins at 1 PM. Individual game registration ends 30 minutes prior to its listed start time. Registration is cash only (change will be available).

Tournament brackets will be randomly generated and managed by MNFGC. Prior Comicade winner's in each game (where applicable) will be seeded to opposite sides of the bracket.
These are double-elimination tournaments (you will play at least twice).

Bring your own controller

Games & Schedule
Unless noted all games will be run on PS3s with Asus 236H "EVO" monitors. Game rules in comment below.

Additional tournaments can be run, if time and space allows, by request at the venue. These side tournaments will not take place before 6:00 PM to ensure listed tournaments have enough space & equipment.

Rules:
Game rules:
Universal rules (except where noted in individual game listings):
2/5 for bracket, 3/5 for winners, losers, & grand finals
Default timer
Winning player is character (or team) locked, losing player may switch
Turbo & programmable buttons functionality on all controllers is banned
Pausing the match, unless otherwise agreed to by both players, is a forfeit
You will need to check in by tournament start time. If you have not checked in by the end of the first round of the brackets you will be DQ'd into losers. If you are not present by the end of the first round of loser's you will be DQ'd from the tournament.

SFxT -
v.2013
Gems are allowed
Players may not take more than 60 seconds to select gems

MK9 -
Kratos is banned
Hell Stage, Wastelands, & the Street are banned (unless agreed by both players)

SSF4: AE2012 -
Winner can change ultra (must select prior to loser's selection)
Blanka Alt 3 is banned
Volcano stage is banned

Thanks for posting this. I've been lazy posting announcements.

A note is that SCV is 3 out of 5 through the whole tourney, he just doesn't post about it in the rules for some reason. Heh.