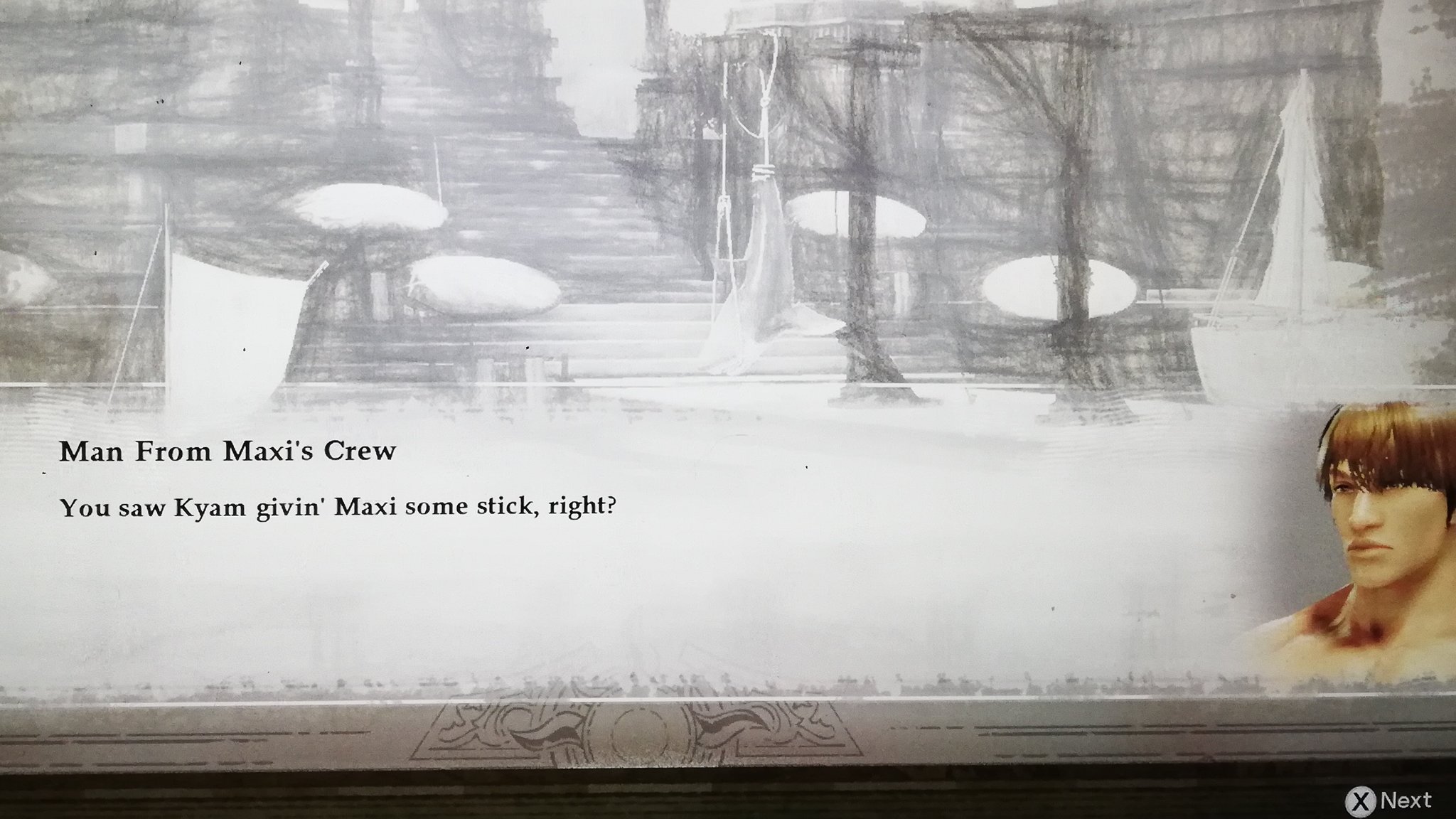 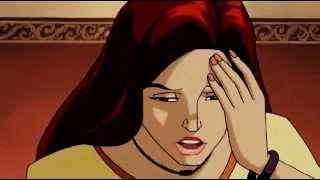 Classic "I don't like it, so its bad", even though this is literally one of the most unique and most liked features in the series. I'd say its one of the reasons SC is still alive, considering it was never that big, as well as many hiccups, such as SC5. You don't have to like it, the majority of the playerbase does.
S

Macaulyn said:
Classic "I don't like it, so its bad", even though this is literally one of the most unique and most liked features in the series. I'd say its one of the reasons SC is still alive, considering it was never that big, as well as many hiccups, such as SC5. You don't have to like it, the majority of the playerbase does.
Click to expand...

[Edit: Let me try this again while being slightly less of an asshole. Was in a bit of a rush the first time: it didn't help my tone.]

I get that a lot of people love the character creation aspect of Soul Calibur, and I understand that over time it's become fairly interconnected with the "brand identity" of the franchise; not only because the games support it enthusiastically, but also because not a lot of other fighting games do it as well as SC or at all (I assume MMOs and the like are a totally different animal.) SC4-6 have had decent editors, plenty of parts and options, and I've seen some surprisingly good creations. That's all cool.

SSFox has already replied and stressed this, but the complaint is that the character creation has maybe penetrated too far into all the other elements of the game. I'm not sure if the assertion that "the majority of the playerbase" likes that created characters appear in ranked play holds up. Nobody wants to take away people's palettes and canvas, but there are downsides to having a fighting game whose primary competitive mode features characters "ripped from the mind of the internet" like some late-Renaissance SVU. For one, there really is an issue of tonal incongruity when half the time you're fighting tuxedoed skeletons and the other half cyborg-angel Alexandras who stepped right out of Phantasy Star Online, but more importantly the Create a Soul characters quite frequently deviate from the default gameplay values that constitute the standard balancing of the game.

Having a CaS system has its ups and downs, but at the very least I think we should all be able to agree on the following for ranked play:

1. All characters sharing a moveset should have identical frame and damage data, and hit- and hurt-spheres (currently not true with CaS)
2. No costume mixups, i.e. clothes or armor parts that obscure otherwise readable start-up animations (remember the giant cello-monster in SCIV?)
3. Ranked play should follow offline tournament standards as closely as possible

There is a way to integrate 90% of the benefits of having customization with the above tenets: limit ranked custom characters to roster-character costume and color edits, and limit some of the size sliders and position options on accessories for the base roster so that they can't completely engulf limbs and weapons (see: Tekken 7, minus item moves.) For casual lobbies, let people go wild with the Lizardman dickmonsters, IDC.

Okay, sorry for going a little aggro there, but as I mentioned in the general discussion thread I really believe that CaS has greatly contributed to the decline of Soul Calibur as a franchise. In SCIII it was basically a bonus, they made a quick-and-dirty npc generator for Chronicles of the Sword and let us play around with it. Cool! All possible creations were ugly as sin, but we got an in-depth color customizer for the base roster and a bunch of playable bonus styles, so that was fun. No-one I know really bothered with Create-a-Souls other than as a one-off gag (exception: random creation vs random creation matches were hilarious, and that should definitely be brought back from the character select screen for local play.)

SCIV... really screwed the pooch on this. First, they normalized balance deviation with Shura (a strictly better Cervantes) being selectable right from the character select screen. On top of that, they made created characters available in ranked play. Like the classic cast? Too bad, have some DeathKnightOmegas and NakedGreenAfroDudes and SwordLolitas. Chuckle at Creepy Ronald McDonald exactly once, play against him more often than actual Voldo for three years. Soul Calibur IV's online was this weird and horrible hybrid of competitive fighting game and clothing-simulator / meme-generator, a 16th century sword opera with an unironically awesome orchestral soundtrack hosting what Something Awful forum-posters might imagine a rave looks like. This is what we want defining the franchise?

SCV I didn't play so I can't speak to it, but I remember seeing Ivy's 2P so I imagine Project Soul figured that what people had made of SCIV was what they wanted more of going forward. Lost Swords, I believe, strengthens this hypothesis. All in all, I'm relieved with the restraint shown in Soulcalibur VI, but the memeworm has burrowed deep. Instead of proper 2P and 3P outfits for the cast, or a satisfying amount of stages, we get eighteen crotchless panty options for people to put on Talim or SwordLolita420 or whatever. Is this progress?

Look, you give the public any online connected tool and they'll use it to shitpost. I mean, kudos to Soul Calibur for breaking ground here, I guess, but can we maybe... you know... do it somewhere else for a little bit?
Last edited: Oct 8, 2019

Macaulyn said:
Classic "I don't like it, so its bad", even though this is literally one of the most unique and most liked features in the series. I'd say its one of the reasons SC is still alive, considering it was never that big, as well as many hiccups, such as SC5. You don't have to like it, the majority of the playerbase does.
Click to expand...

I'm sure there are people that love it, but i'm not sure about that majority thing.

You remind me of the same people that told me once that the majority of Tekken player base loves the silly customization in Tekken Tag 2 and Tekken 7, then even right before the game came out and the game got exposed to the entire world we've seen the actual facts.

Also i didn't say it's bad, i said it's bad that it's everywhere in every game mode, it's not the same thing y'know. I myself like to have to little fun playing a created character in some rare occasions, but a feature like that shouldn't be in the entire game in all the game modes imo.

I will keep on repeating this - It would be great if we could separate custom characters from ranked gameplay. Unfortunately we do not have that luxury considering how small the community is

Yep. I wish we had at least 1 mode where we didn't have to be exposed to CaS shitpost-like nonsensical and/or (deliberately) piss-poorly designed characters and we could just play traditional Soul Calibur, one on one between 2 actual roster members.
Like...

Those are some random-ass match ups, but I was just looking for an excuse to use the sprites because I think they're cute and this is the shit-posting thread after all.

Edit: you don't run into CaS crap in Arcade, but that's offline and, well, y'know... :s

The 4th character from SP2 is: 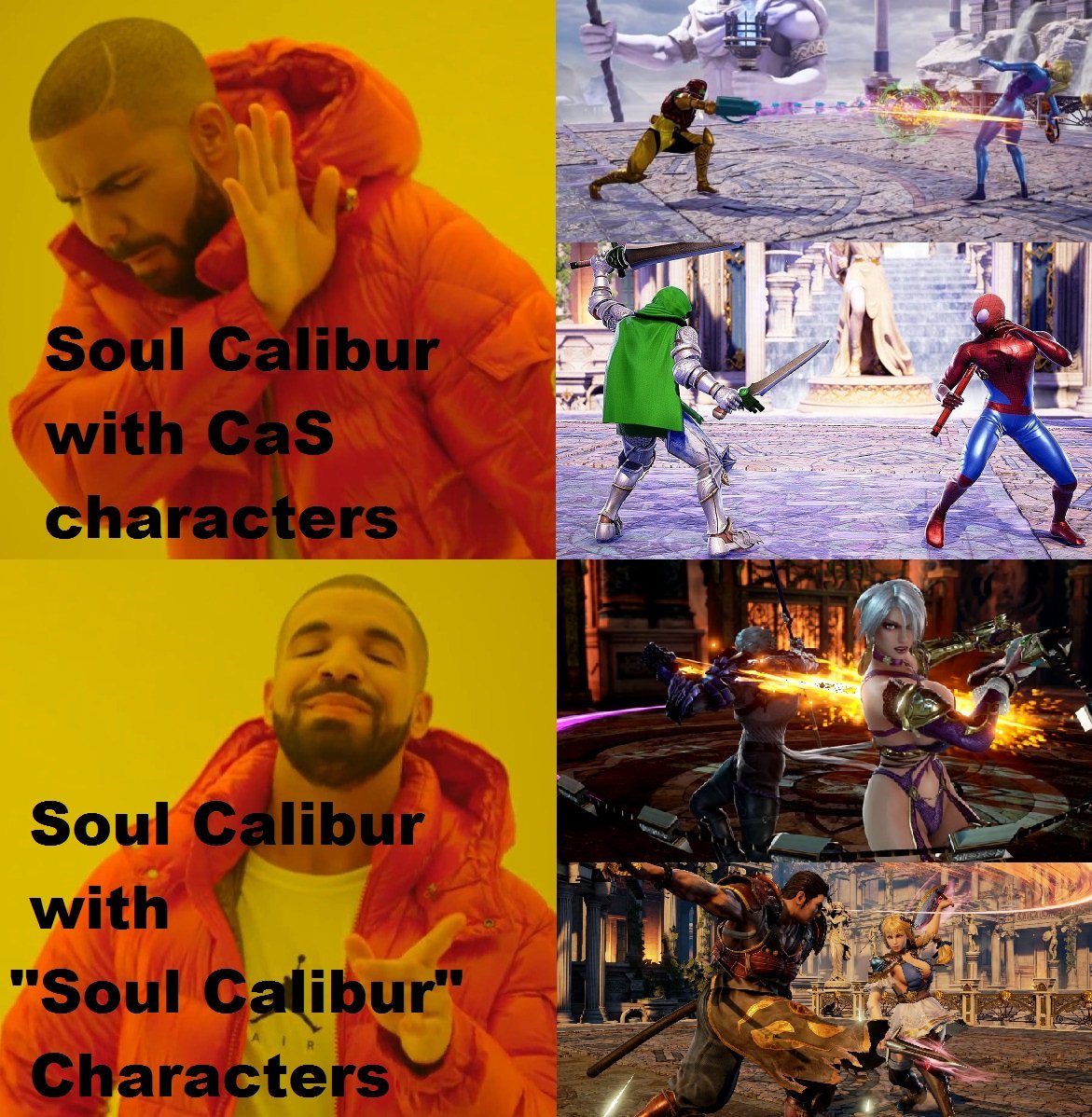 Unpopular Opinion: I think CaS was at its best in SC3 honestly. I highly prefer most of the clothing/hair in that game over what the later games have (ESPECIALLY SC4!) and yes I do think that the job system in that game is way superior to just making your OCs a damn mirror of an already established character. If I'm making a character, I want ORIGINAL WEAPONS DAMN IT! Plus I think it was pretty cool how what your characters wore determined what kind of personality they would have. I would love to see some of those features return in future games and please GIVE US BACK CHRONICLES OF THE SWORD! That mode was AMAZING OK!

Me leaving 8wayrun when they finally get Hwang:

If everyone leaves i'll be forever alone T_T

I’m staying when Hwang, Setsuka, and Rock make the cut. Even if Rock is a dark-skinned lesbian loli.

I wish I could tell if this game was doing well enough for Bamco to continue justifying future DLC. On one hand they LOVE to pad their games DLC. DBZ Xenoverse 2 has over $100 worth of DLC and it came out in 2016.

But at the same time Xenoverse 2 is one of Bamco's top 5 best selling games (on steam) with Tekken 7. I took a look and SC6 is currently at #21. It will definitely get a big boost come Season 2, but I just hope it's enough! We need more than just 3 more veteran dlc! 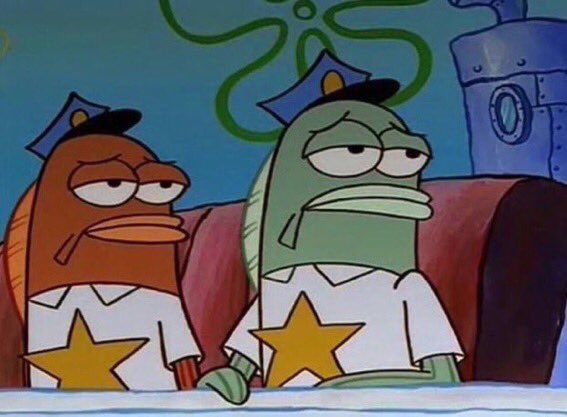