Likewise an authentic ginger color would be appreciated. I keep making them too orange.

With regards to "ginger colored" hair, I'm happy with how 3,5:9 looks: 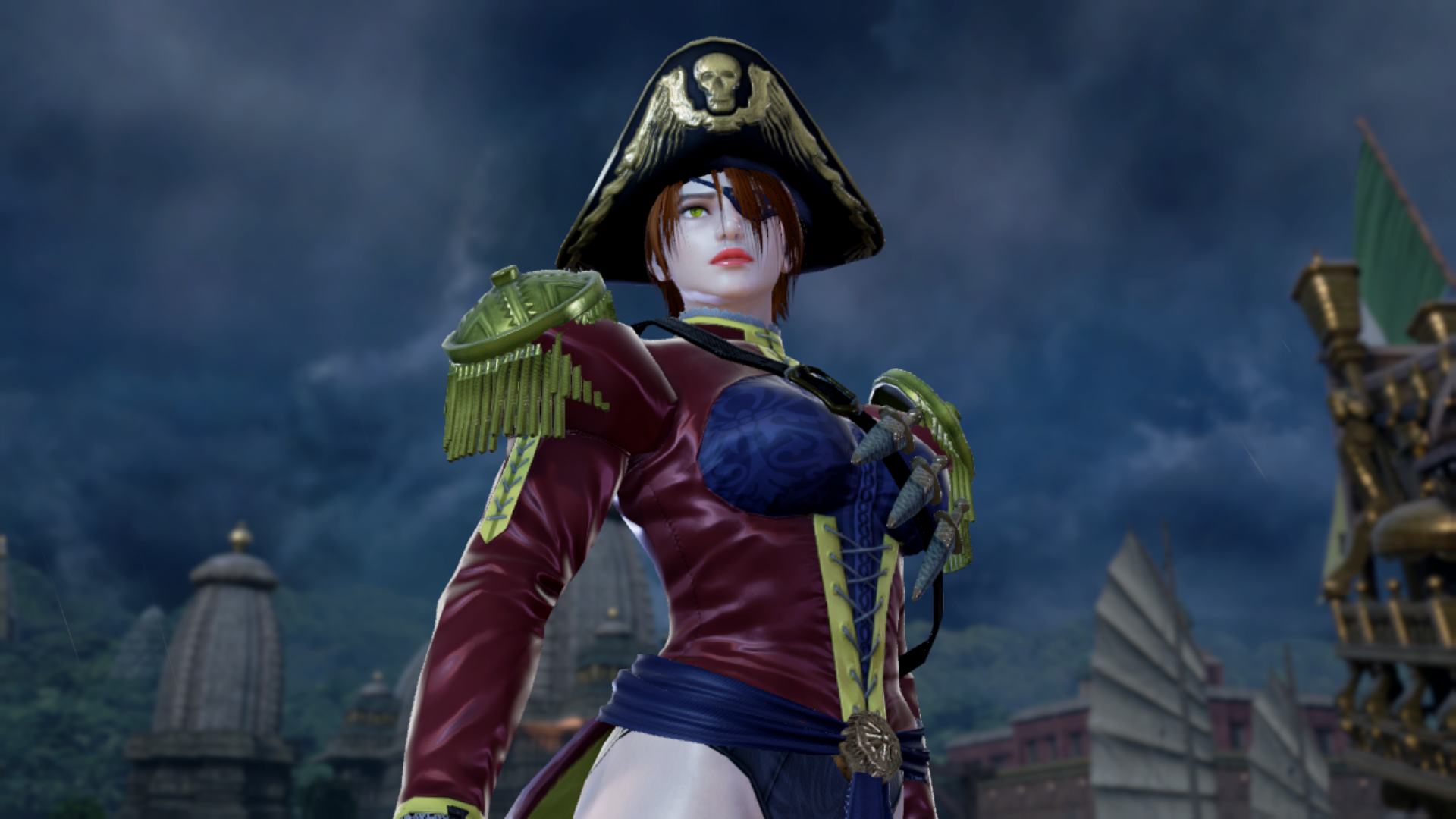 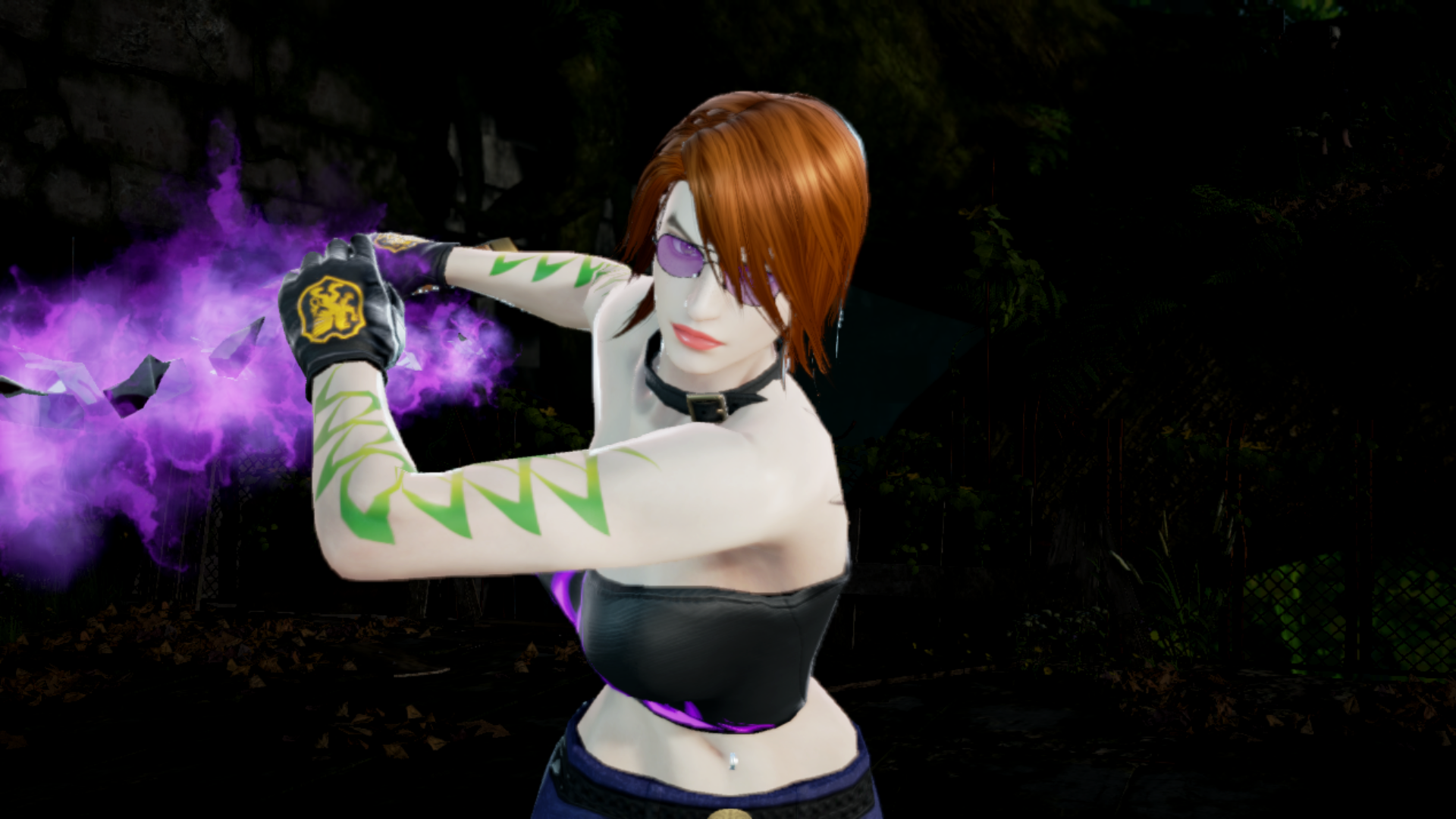 Nice! Which codes do you use for blonde/brunette? 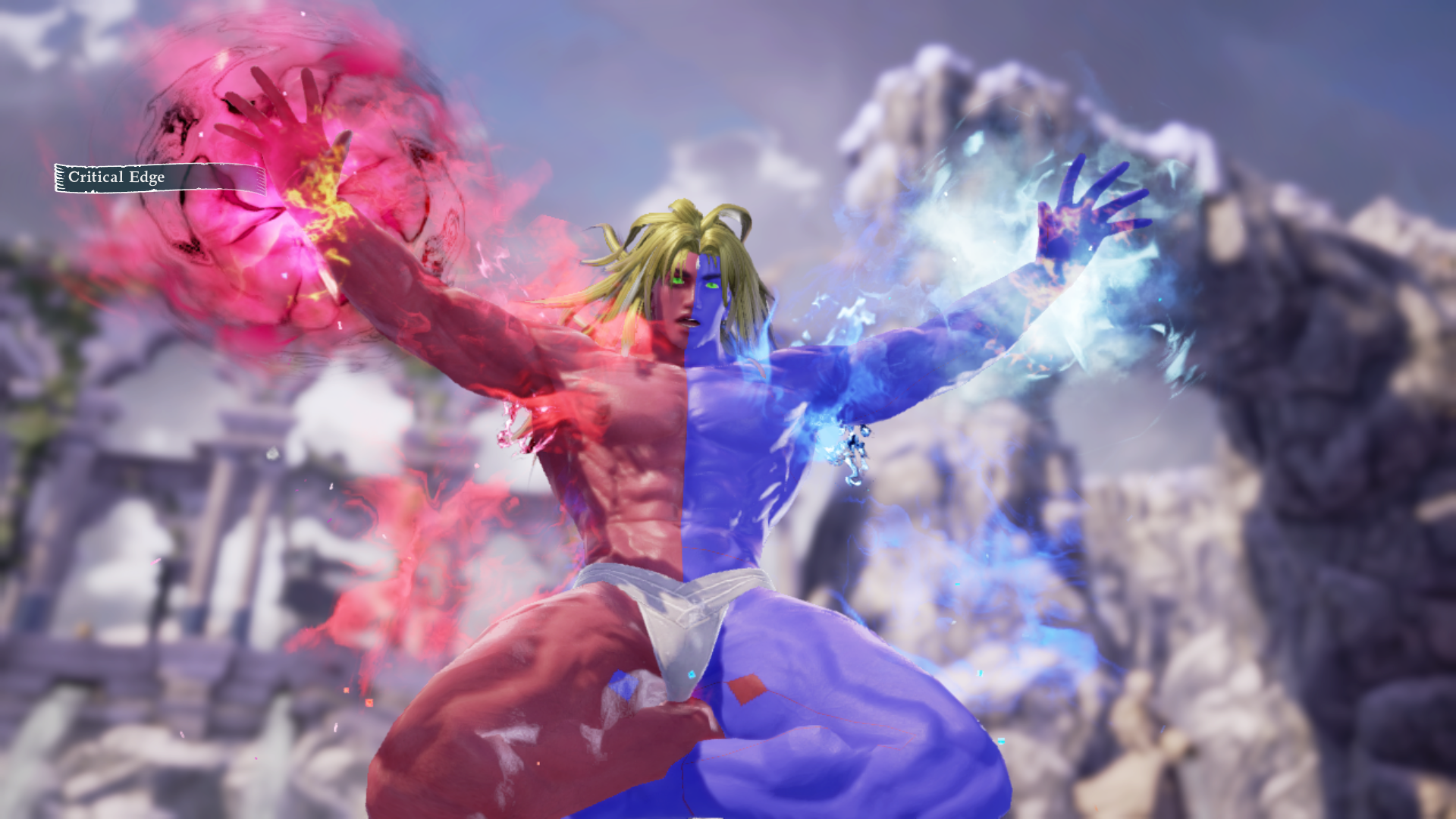 ​
I don't have any examples for brunette since my only non-black haired brunettes are Seong Mi-na with her default hair and color, and a Street Fighter Alpha 2 Sakura cosplay for Talim using the cut version of Seong Mi-na's hair… with its default color. I'm not sure I agree with that choice for blonde hair. Unless it's a recreation that calls for it, such a deep yellow color looks unnatural, like it's too bright and green. I tend to go for softer hues, usually light browns at low saturation. As for ginger hair, I've been playing around for a little bit and these seem pretty nice. Your millage may vary depending on the aesthetic you're going for, it's a hard color to get right and an ever harder color to work into functional designs. We should also look at skin tones while we’re at it. Here are some of my characters for reference with tanned skin. And some dark skin tones. 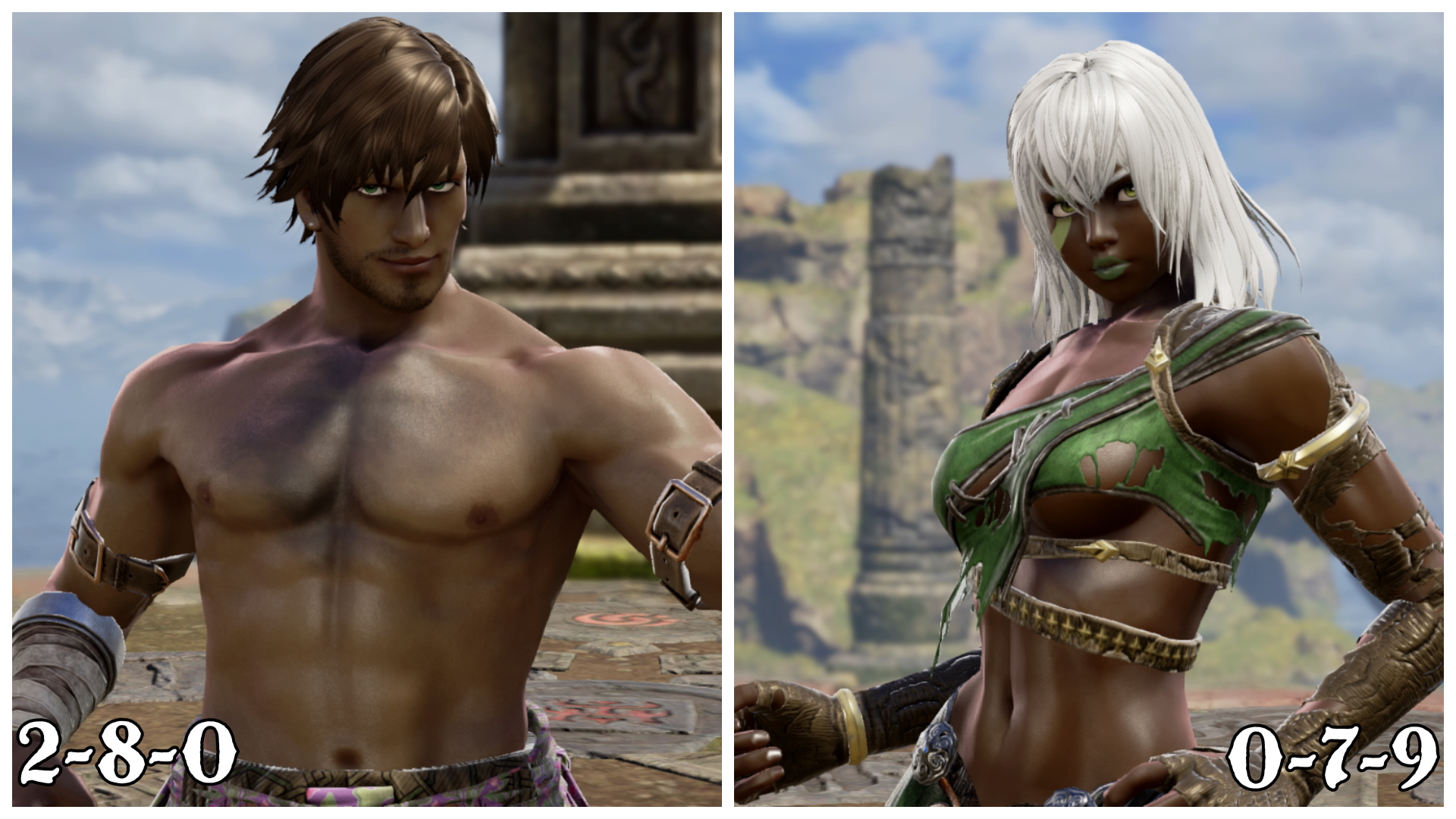 ...don’t mind the near nudity.

When making the human version of my devil, Karen 'Akamu, I opted for "6,6:6" just for the Hell of it (heh); thought it gave her a nice "caramel" tan: 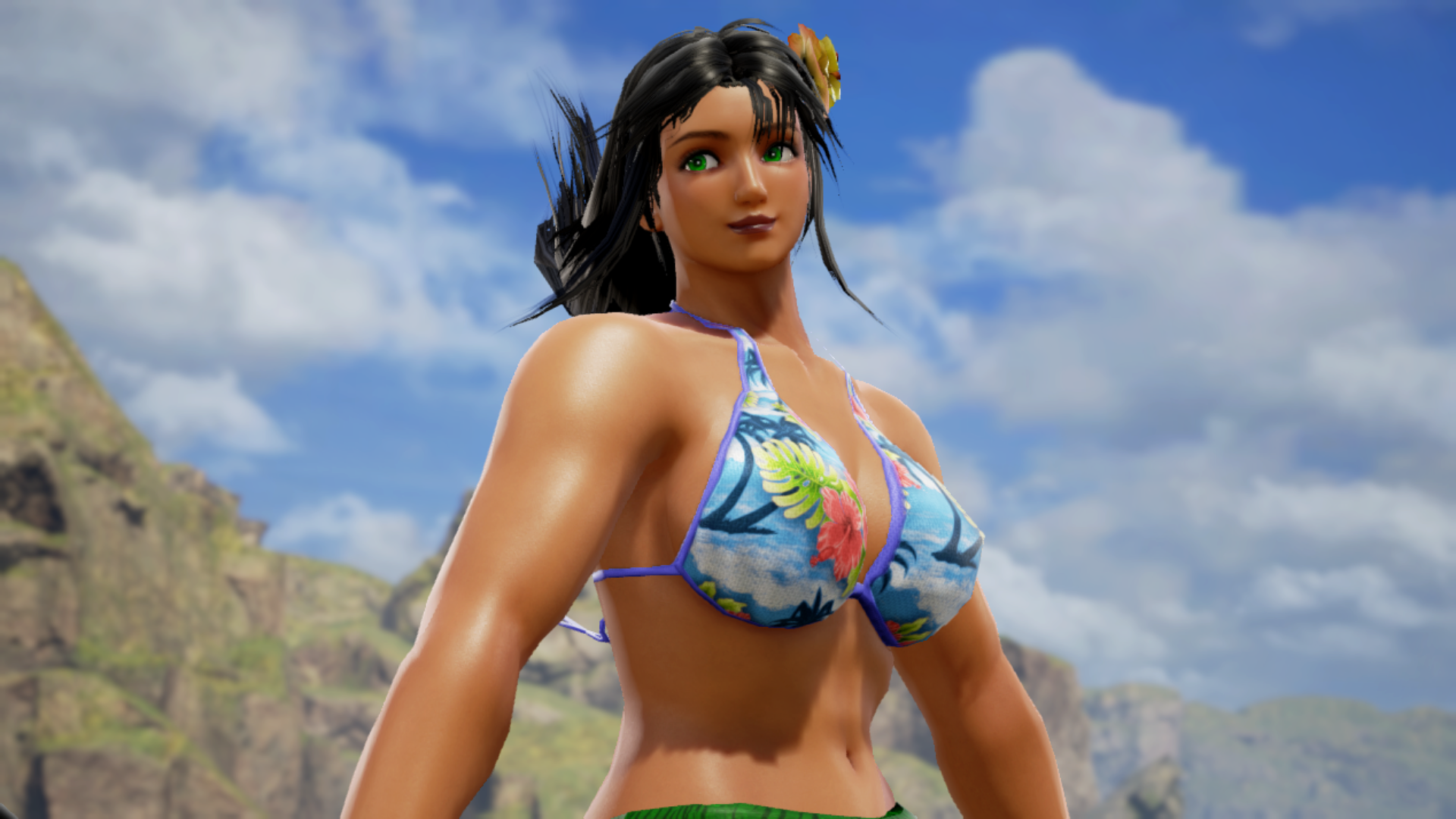 ​
Then for the recreation of my Dynasty Warriors Nanman spear-user, Xiù Měi, I used 6,8:4; something a bit lighter but less vibrant: ​
I've also mentioned previously that if a Malfested (Mutated)'s skin tone is white (31,0:0) and their markings are "black" (0,0:0), then the markings will appear nearly invisible: ​
A specific combination, yes, but perfect for Quintessa who was "drained of all color" by a magical artifact (her glowing blue eyes are due to attaining "arcane sight" later).
Last edited: Sep 9, 2020

Thank you guys so much for the codes! Greatly appreciated and really help a player who struggles with colors.

Can I ask which codes you generally use on clothes to get core colors, like a nice blue, red, yellow?

Yellow in particular can be difficult, as can metal tones.

Here's how to use the zipper stickers as the armbands-

it takes four zipper stickers to use, two on left arm and other two on right arm i also found out that you can use two number 1 stickers as armband! never happened in SC5!

You can also use two Number 1 stickers for a …waist band?

Though the zipper sticker is nice due to its built-in texture. ​
Speaking of Mortal Kombat, I find Hilda's Defender's Tiara pairs with the Spy Mask quite well, as seen in Karen 'Akamu's "Jade" cosplay above.

Half OT i guess, but help will be rewarded with downloadable commission request :D

Done It a second time, all gone perfect Just the same

Tried a third time, but now i can't find my creation to save It.
Anybody know if there's some way to directly search by author?

Checking hundreds to find mine sound pain in the ass insaw this on a site so. Not mines just ref. How do make the legs shorter anyone know thanks

Ashen said:
insaw this on a site so. Not mines just ref. How do make the legs shorter anyone know thanks
Click to expand...

They posted a video about it, those aren't really legs, they just used Extra Equipment to simulate Obi-Wan having "the high ground" for the joke / quote from the movie. It doesn't look very good in motion. It's just two boots and the school bag.

Thanks lol it does look,off lol. Love idea trough

I'm not sure if this is already common knowledge but I stumbled over it the other day:
Vertically mirroring structured stickers seems to also invert its 3D-effect from dented-it to dented-out and vice versa.
In the example, the left scar sticker is vertically mirrored, the right one is not.