she seemed a bit laggy and hard to use unlike kilik

she needs a justframe or six. Perhaps one on 99KB to make them bounce into a comboable height.

Her AGIS should be a tad more reliable. And now that CF's are gone she needs a way to force people into her CE and BE attacks if they are going to keep her similar. If not and are going to capitalize on her distance maintenance the infinite stage will be her BEST friend. She should have more moves like 4A that move her backwards quickly and nearly safe.

perhaps a better retrack on 4KB, make 4A+B A B A natural combo. Make 11B Work like it does at tip range all the time.

She needs better step killers at long range as well. Perhaps make her 66A a full swing instead or something.

Have the just frame version of 99KB(suggested above) Also pick up grounded, and be usable after 3A+B

Make the options out of 1b a tad more threatening.

Her grab game is excellent, it should stay similar.

I agree mostly with that. However, A+B is safe (-5 on grd) and cannot be ducked unless the first hit misses.

I miss all of Mina's moves that had knockback, but no longer do. Her RO game suffers as a result. Not to mention her lack of launchers. In other words, I miss SC2 Mina. =)

In general she needs faster moves and less linearity. I don't feel I need to go into heavy detail as to what needs improvement, as I'd just be reiterating what's already been said a thousand times.

EbonyBlack said:
I miss all of Mina's moves that had knockback, but no longer do. Her RO game suffers as a result. Not to mention her lack of launchers. In other words, I miss SC2 Mina. =)
Click to expand...

Best Note
no matter how far she is away from the opponent, the results of a hit should be always the same, as it was in all SC´s before SCIII.

I found this old SCII concept art of Mina. Seriously Namco, how can you not care for someone this hot? 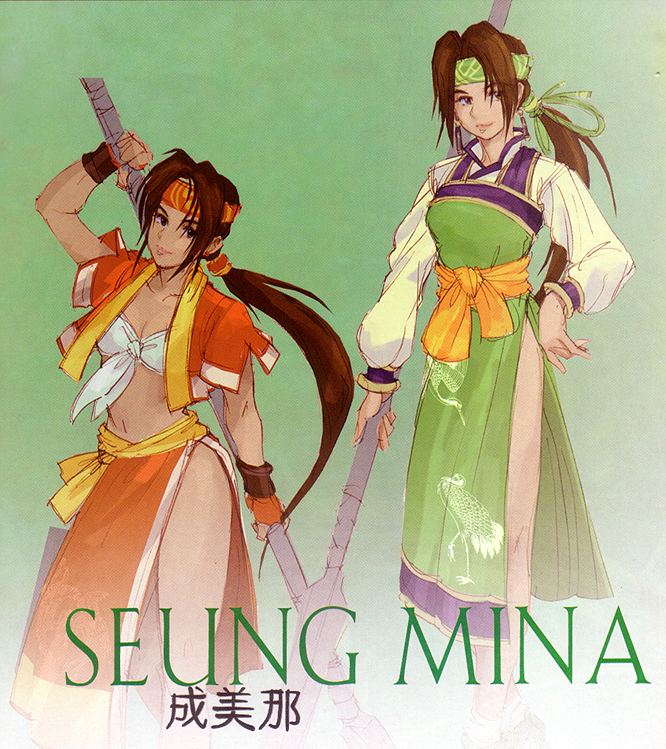 My main wish is for Talim to get in the game, but a cougar Mina wouldn't be unwelcomed. She is one of my mains after all :D

Increase her tip effect range, either do it by increasing blade size, or just glitching it

PLEASE LET HER BE IN SCV!

pretty please.... with sugar on top.

I want her to have her soul blade and Sc2 or sc3 sorry cant remember qualities.
I like the fact she had proper options in soulblade

bushy21 said:
I want her to have her soul blade and Sc2 or sc3 sorry cant remember qualities.
I like the fact she had proper options in soulblade
Click to expand...

I cannot make out to what you're saying. Elaborate please.

Well in sc4, she's pretty limited in the natural combos, due to a decent amount being removed from her command list.
I mean kilik inherited a few of her moves, like the bb sidestep
I dunno how to explain, Ill have a look, but in general after playing with her on soulblade and through to sc3, comparing that to sc4 I just feel like she lost her agility, and certain moves that were just paramount in her arsenal.

I hope Daishi realizes that Mina deserves to be in SCV, aged or not.

What she does have is great back step or so, decent throws, great soul gauge damage, and......hot looks to get my attention. I try to play her at mid to long range. Staying close is risky because Sophie for instance can tear her up with just TASB. I do certain crappy attacks to lure in my opponent. 11B for instance is just bad, but it feels good to 4A when my ignorant opponent gets all confident running up to me. Sometimes, I managed to 11B(at tip range) to start up WRB, 66B, FC1B. One of my favorite set-ups.

I love seeing a cocky Soph, flaunting TAS, then I give her my toe to suck on while her lauch her overpowered ass up.

LollipopInMyHair said:
I hope Daishi realizes that Mina deserves to be in SCV, aged or not.
Click to expand...

If all else fails replace her with someone that reminds me of Mi-na.

LollipopInMyHair said:
I hope Daishi realizes that Mina deserves to be in SCV, aged or not.
Click to expand...

EVERYONE HURRY! KEEP LIKING THE POST I AM REPLYING TO! MINA MUST BE LIKED MORE!