SBH B - Still the huge launcher. Guarantees the same stuff it used to.
SBH k(BE) ~ Same from SCV
SRSH A+B - Mirror image of 66B, back from SC4
SSH AA - Two low hits from stance
SCH k(BE) - Same from SCV. Told you that throw reset was gonna be useful, Party Wolf!

I'm definitely ready for SCVI now. How about you guys?

Heaton said:
I'm definitely ready for SCVI now. How about you guys?
Click to expand...

They are going all out with this shit bruh.

They are going all out with this shit bruh.
Click to expand...

So genuinely hype right now. Gonna be really exciting to try this version of Siegfried.

Also let me try and advertise the character discord I made here:

While watching the video I noticed my pants got tighter.

SCH kB looks like it's on in SC. Also he has a JF after that which goes into SBH, looks new but also slightly familiar animation.

The new combo looks awesome, hope he is interesting to use in SC VI.

The hair needs some touches. The armor makes him look too slow. Not a fan of the voice...

I preffer this one: 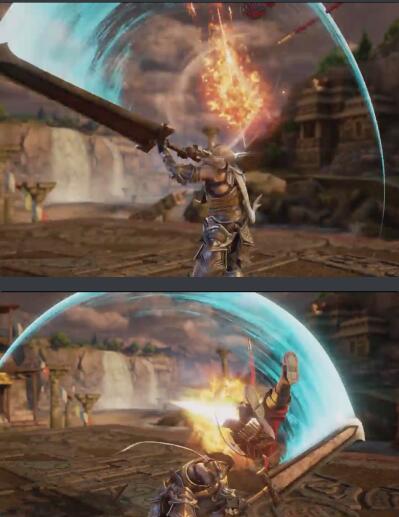 He looks like make a 66 in the first combo after SBH B. Thus the command of the new move may be 66BB. The old 66B could be changed to 66A+B or something.

Not sure exactly which part you're referring to. The only time I see 11B is right after an agA, and he doesn't go into stance after agA - you can tell because he doesn't do an extra spin into SRSH like he would if he had done ag(A) ~ SRSH

Oh man Siegfried looks great. I love his costume in this game, I think it looks fantastic, and for only 50 or so seconds of gameplay there was so much I was happy to see, classic returning moves and a couple of interesting new things. I can't wait to try this version of him out.

Do we have any confirmation from other trailers that jf's have any visual confirmation in this game, cause that looked like a regular aga in the trailer. I of course hope he has a jf version, but I can't imagine he wouldn't.

You mean somthing like this? The new 66B（I guess） go into SBH looks like a JF to me.

Glad that Sieg's in, but he looks really slow to me....Still looking forward to play him tho if his combo strings and stance roulette are good.

Honestly he looks too fast to me.

I'm glad Siegfried has his A+B moves from his stances again. I hope Siegfried's 66A from SCV is in because it's a really aGI that takes care High Horizontals. Great move except on block by going through the opponent's body.

I'm so glad Siegfried is back without a crippled moveset.

Frayhua said:
I'm glad Siegfried has his A+B moves from his stances again.
Click to expand...

This. A+B moves from stances were the shite. I want to be able to tennis-serve my opponent out of the stage with a massive fuck off swing again.

Compare that with the new move:

In the case of the SBH B combo, he doesn't enter SRSH at any point, and the move animation is very different compared to SCIV 88B - the two hit vertical is a completely new animation.

In addition, the animation for SRSH A+B is already in the game seperate from the SBH B combo:

So it's definitely not his SCIV 88(B) into SRSH A+B. The animation is completely different, and hasn't been in any game before; i.e. it's an entirely fresh animation. I am happy that we're getting we're moves that have been animated from scratch instead of only animations spliced together to make new moves like in SCV. That tells me that a lot more time and care is going into this game than SCV.

On the topic of Stance A+B moves: I'm hype for SRSH A+B's inclusion, and hope he has the rest of them too, not just SRSH A+B.

Also, screenshots from the Twitter have been uploaded to the OP. He's looking pretty good, no?
Last edited: Apr 13, 2018

I think it may be just SBH transition itself given hit properties.