I'm making this thread because for some reason, I don't see any of Voldos' bugs getting fixed. It might be because there isn't a specific place for us to list them. So if you've noticed any glitches or bugs with Voldo wether they be damaging or beneficial to his game, please list them here. I will add them to this post once they are tested. Include a video too if you're so inclined. If you're not able to, let me know and I will try and recreate it in a video for you. Thanks!

Yeah, I just remembered that when I woke up today. What a thing to forget lol...

TwiztidRaven said:
66B won't punish things that are -16. Example would be NM 22 AA. 66B won't punish but 66B BE will. Same with pyrrah 3B if i remember correctly.
Click to expand...

666B is i17 and has a different animation. I don't think this move has the same problem. The hitbox on 66B~BE is definitely more bigger than 66B.

Enkindu said:
666B is i17 and has a different animation. I don't think this move has the same problem. The hitbox on 66B~BE is definitely more bigger than 66B.
Click to expand...

While the hitbox is bigger I don't think this is the problem. In 1.01 I punished NM 22AA with 66B on an extremely consistent basis. It wasn't until the 1.02 patch that this occurred. So something they changed during the patch caused this problem.

Does anyone know if the new update affected anything, i cant find anything abot it anywhere

Which was a neat little trick not a lot of people knew about beforehand
Click to expand...

Maybe not but he is able to use the 22G trick to get out of them. d: You just have to make sure you step to Voldo's left when you do it.

Edit: Oh and it doesn't work in BS.
P

22G trick not in BS ? Hey I don't understand ? Quick step cancel is available in normal stance for Voldo ?

I can't seem to use the 22 G trick on Ivy CE though, tried both 8 and 2 inputs on both 1p and 2p. On the other hand Astaroth's is easy. Is there a particular way to do it?

Found a new glitch, and this is a nasty one. When Voldo's MC B+K armor activates, he receives hits from every single active frame that an attack has when it attempts to absorb it. When you take moves like Astaroth's 66[K] or Cerv's iGDR, the damage he receives becomes immense (66[K] does 312 damage on its own, which is an instant KO).

Alright, so yeah. If a move has more than 1 active frame, it'll hit an additional time for every active frame after that. I'll test a list of moves that are notable for this glitch, with (!) to denote moves that deal ~100+ damage as a result:


Besides the possibility of getting a Voldo player instantly killed for no reason in the middle of an important match, this glitch has other interesting implications. For one, we can use it to test the active frames on a large variety of attacks. Two, it goes to show why moves like NM A+B and Tira JS B+K have built-in GIs after the revenge is activated.

Here's a video of that glitch. Good find, Slade. 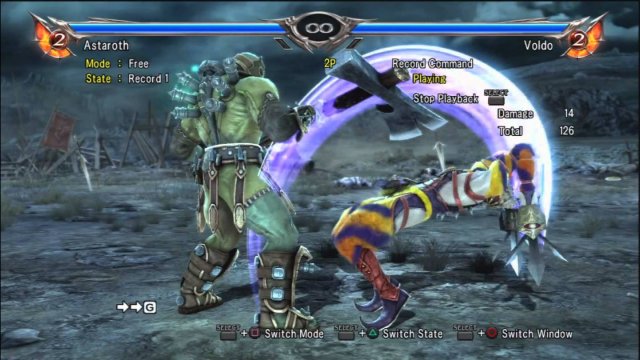 Yeah Tira's JS B+Kis exactly the same, you can use that move to test active frames too. It's also a bit easier to use and probably more practical as she can do it immediately from neutral.

Help me figure out the secret to doing this consistently please. 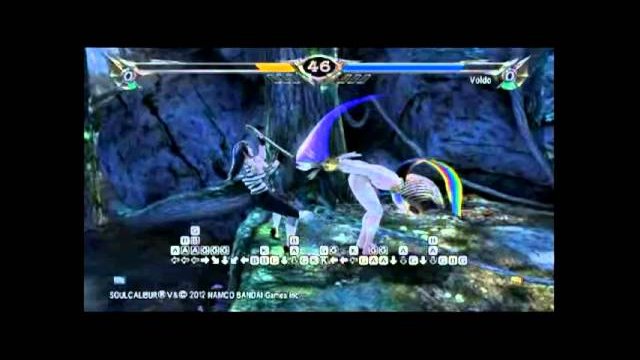 Enkindu said:
Help me figure out the secret to doing this consistently please.
Click to expand...

Doing BS 2a+b G B G correctly will have voldo do an instant crouch after BS WR B recovers. I have made a video showing it:
I'm still testing if it only works from 2a+b and the instant crouch allows other attacks besides wr B.

Shit's hard to do, though.

Just tested it, and you can do any WR move with the glitch, not just double WR B.

It works with BS 2A+B G A G, too. I haven't been able to get the same result with wr K, however.

This leads me to believe its a glitch with BS 2A+B's STC.

good work, dime. so you can only do it from bs 2a+b? it doesn't work after a 2k or something like bs 8b? also, do you have to press G after bs 2a+b for this to happen? that's just so weird. i was hoping you could do bs wr b over and over. i think it'll still be useful.EDIT after some testing of my own I've figured out a couple more key points.you don't have to press G after BS 2a+b.It seems to be partial to when you press B for the BS WR B. Pretty late in the recovery of BS 2a+b, but not during when you would start standing. It's not a JF in that regard. Maybe just before you start standing?
I don't think there's a timing for when you press G. I tried mashing G during BS WR B and only got the glitch 20%. This is why I believe it's all about the timing on the BS WR B.
I haven't gotten it to happen off BS 2A, BS 2K, or BS 8B K.
Also, when I'm consistent enough, I'm going to see if you can do another iWR glitch after the first one. All I'd need to see is that lil twitch after the 1st BS WR B to confirm.
You must log in or register to reply here.
Share:
Facebook Twitter Reddit Pinterest Tumblr WhatsApp Email Link