Last month we ran a contest; which was essentially a character poll. Qanba USA graciously donated us a couple of their new Obsidian Joystick SOULCALIBUR VI Edition and we decided to give those arcade sticks away to a select few of you, our loyal fans! We only asked that you select your favorite character as your character header in your account preferences. Well the results have been calculated and the winners have been chosen!

Remember that these results are from the month of October; popularity of characters may have changed since then, which will not be displayed in these results. In addition to this, YoRHa 2B was announced with only 3 days left in the month, so "her" low results should be considered with that in mind. As you can see, Taki easily topped the charts with over 10% of the vote on her own! She was followed closely by Tira, Sophitia and Siegfried who averaged around 7% each.

This was a contest however, and winners have to be chosen... in this case, we had TWO joysticks to give out. So congratulations go to @TsurugiNoba who selected Mitsurugi as his favorite character, who he has been using since the beginning. The other winner however, has chosen to remain anonymous, but you'll be happy to know he is a Tira player.

I've taken the liberty of taking more pictures of the arcade sticks we were giving out; in case the press photos weren't detailed enough for you. This is easily the nicest mass-produced arcade stick I've ever seen. It even has blue LED lights around the trim! If you didn't win the contest, don't forget that you can always purchase these arcade sticks at any time directly from Qanba or from Newegg.

​
We hope to have more contests in the future! So keep reading 8WAYRUN and make sure your souls still burn!

Disclaimer: We were not paid or endorsed in any way by Qanba or Newegg for this post. However, the two arcade sticks given out in this contest were supplied directly from Qanba USA. 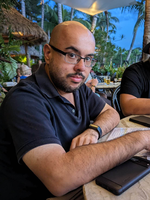