[Ohio] Class is now in session

Too bad about that no SCV tournament at Youmacon, because I would have wrecked some faces. I played some casuals, and there were a few players as good as me. And then the rest didn't know how to block.

Ellie looks really weird with Edge Master style, especially at the start of the match. Her big flowy skirt clips through her legs then flies up in her face right before she stands up.

Thanks Eric. Greatly appreciate it.

I was disappointed in how there was no SC5 tournament up at Youmacon this year. I guess it's a good thing we're making up for that with having a SC5 tournament at Alpha Attack in a few weeks. *shameless plug* Lol.

As it turns out my job is safe, at least for a couple months. I'd come out but it's too expensive to get there without the car handy. 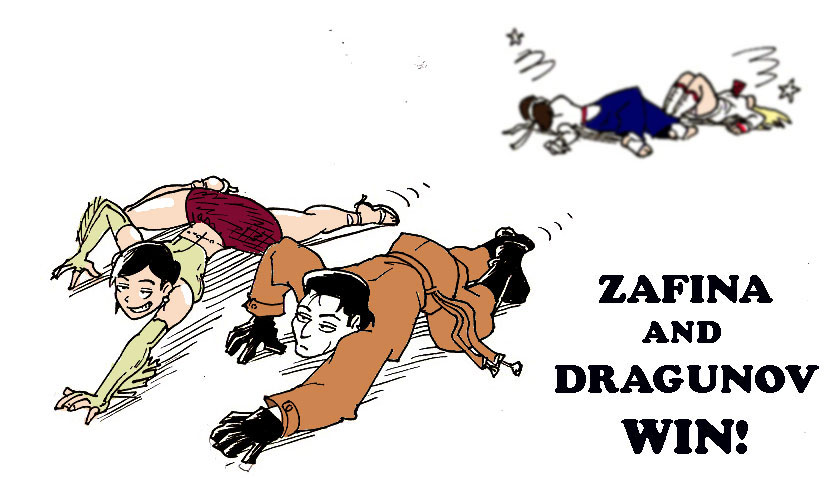 Dojo, no worries man. It's tough getting around without wheels of your own. I know the pain on how that is, so no sweat at all.

Sorry I couldn't make it to RANBATs last week. I had a Med.-Surg. test that day and I was just too exhausted. It was kind of weird that the next RANBAT was only 2 weeks in advance.

Anyways, I won't be going to Fight Night this week; I'll just go to Alpha Attack this Saturday! Also, my Thanksgiving Break starts this coming Tuesday. So excited for next Saturday with Mike, Trent, and Corey!

I play online often. Just only on XBL because I hate PSN. And not recently because my adapter broke and I've been waiting for the replacement, which should arrive tomorrow.

We didn't get streamed yesterday. Some unfortunate stuff happened. :(

Damn that sucks, I was gonna watch =/ what happened?

tl;dr Out of town competitors encountered a completely frozen I-71 and we had to push back the start of SCV. We didn't start until P4AU was well underway.

Sorry I couldn't make it. Mom was getting back from vacation and the flights got all fucked up, got stuck at the airport forever.

whos the best in Ohio and when can I beat them?

Don't have an official best. Top players in Ohio (that I know of) are @fukou_da_man @xragnarok645x, @jansauer, @Sluch, @m216xlegendx, and myself. There may be more that stopped playing but these are the names that come to mind for Ohio.

btw: any of the above can seriously fuck you up. :D

we a sad ass state if fukou's near the top. you shoulda showed up to the tournament last weekend to meet us

emo gurrl whenever im on, you on netflix. same with sniper wolf. im usually watching on my pc whenever my ps3's on so yeah whatever. we'll play sometime

GGG, teach me how to oki with Leixia.

TiZ said:
GGG, teach me how to oki with Leixia.
Click to expand...

Dafuq is oki? I just mash and spam. Works like a charm

Good times chilling with Ryan & Trent on Sunday for the video games session at my place. Good games to Ryan & Trent in SC5.

Nate, I like the list you posted up my good sir. I don't think I've played against m216legend before, but I've heard people say he's pretty good. Everyone you put on the list is pretty solid in SC5 repping up Ohio, so I definitely back this list.

It'd be fun to start having regular tournaments for SC5 again to have something more concrete on who's doing & playing the best in the game. It just sucks most of us live far away, so it's tough to session on the regular offline so that we can strengthen ourselves, level up together, & be one solid, unified Soul Calibur community in our state.

Emo Gurl, here's the scoop. As I let you know after we played some matches over the past weekend online, at certain points while SC5 has been out, I could say I've been the best at this game just based off of tournament results & placings in the past we've had in Cincinnati & Cleveland.

As of lately, I know other players have been playing better & more consistently than me, & the tournament results in Cincinnati the past few times have shown that (with GGG, Ragnarok, & Jansauer placing in the top spots). If you couldn't beat me one match, along with getting HELLA mad at me & complaining to me about how you hate people turtling & the way Xiba plays, then you're in for a rude awakening when you have to play these guys.

Sorry to point you out like this, but you're getting a little ahead of yourself by calling out people on a forum that are the best (saying that you'll beat them presumptuously), when you can't even beat me, who is NOT currently the best, & even telling you all this after we played.

That's good that you want to play people that are good at this game, & want to get better, so that's awesome, & I definitely give you props on that because I can tell you put some work in, & you're playing well.

If you're serious about getting better & wanting to whoop our asses in this game, I'm going to truly call you out on that by making sure you play all of us then. Playing us online is fine, but if you have the ability to make it Cincinnati or Cleveland, you should play us offline when sessions & tournaments are happening. It'd be great to see you there to get some quality matches in.
Last edited: Dec 2, 2014
You must log in or register to reply here.
Share:
Facebook Twitter Reddit Pinterest Tumblr WhatsApp Email Link