1- To be honest it's minimal changes, like adding jacket cloth texture using the tiger pattern* and adjusted a bit the stickers on the chest.
On pic will look almost the same, but to me does lot of difference, will remember to post it btw
2- The two little fangs on the fur scarf are just short horns x1, used only 1 3D item for it (same trick i used for Zodd's fur scarf). I used the third item for white feathers, to expand the fur scarf on his back... but just noticed i took no back pics, so it's an invisible addition lol.
Btw yes the horn is a cool item, specially in the current poor selection we have at the moment

I also really like that Groh. How did you get his SCh hair to look right inside CaS? Is that just photoshop to make it look as it does in-game?

The Groh 2P is by far my favorite of the bunch. A perfect mixture of a proper Scandinavian aesthetic and some fantasy flair. Really well done, once again.

You could get screenshots of someone with Groh’s hair w/ an Instant Replay.

As promised, an OC group

To start my classic (back to SC4 days) characters, from an old concept sketch of years ago
They're purposely nation/culture stereotype heavy, as SC (specially classic cast) live of stereotypes and i want design stuff that can fit in the same arena with Mitsu, Siegfried and so on
Also as much i like anime (a lot) i feel dead inside when PS throw at me generic anime crap without core identity like Zwei or Groh

-LUCIO, legendary swashbubkler asshole and greatest duelist. Kill fools, steal theyr girlfriends. In random order he prefer that day
"Lucio" was the original name back to that ten years ago sketch, current name is Rodario.
Side weapon is obviously the main trick here, used all 3 items for it and regret nothing :D
Also absolutely wanted the Ace of Spades symbol, find the way took more than rest of the cas lol 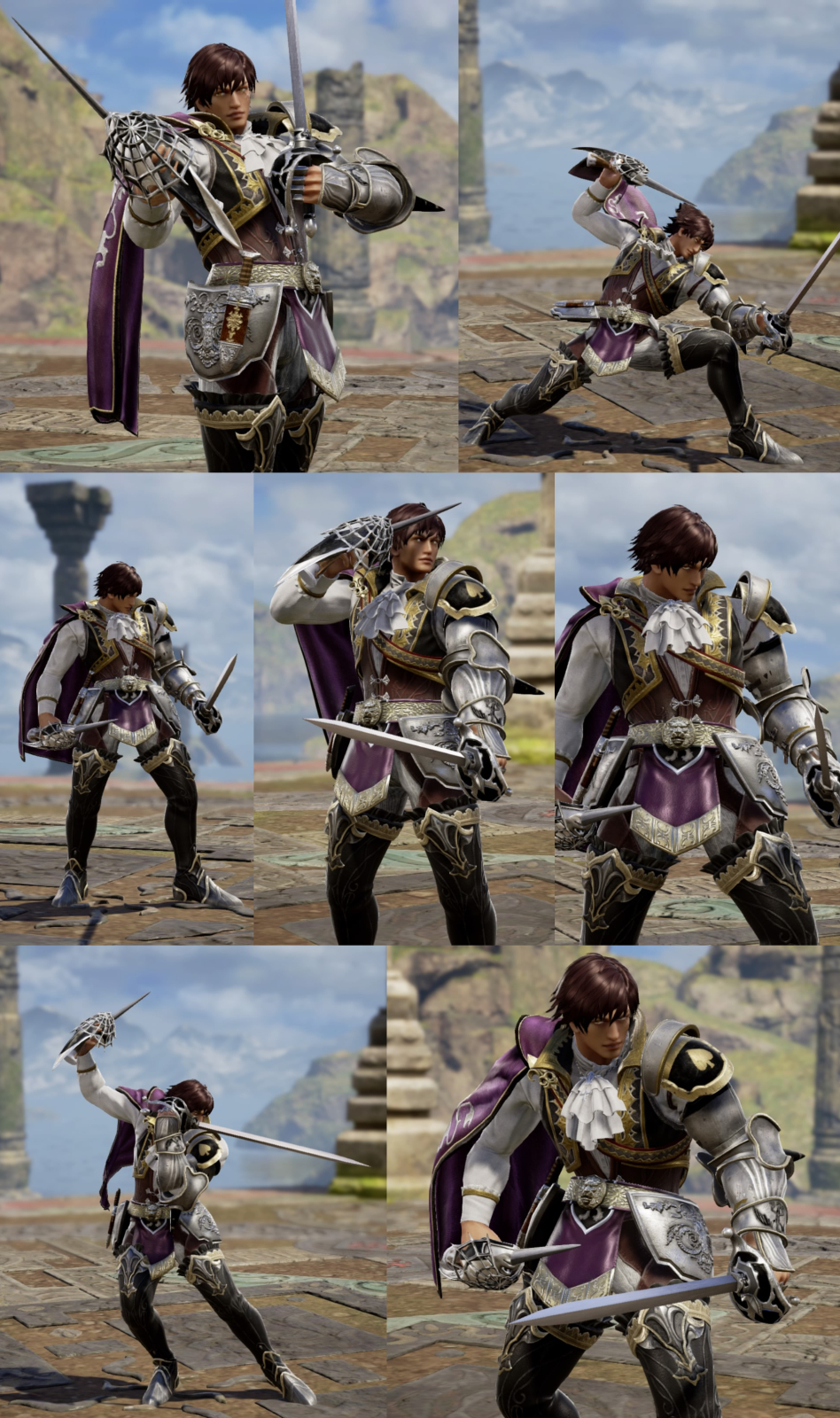 -DOUGALL, highlands warrior ( @rdmunhoz and @Quinion saw that coming lol)
Dude is simple, but it works ingame. Used all 3 items for the high ponytail LOL
Very torn on wich style i prefer him with (Geralt, Sieg or Mitsu)... but as soon i seen Geralt style avaible i thought was the way to go, and considering i never use Geralt he became the "avatar" of that style for me.
Also animations fit him a lot, Dougall doing the headbutt->launch throw is the reason CAS exist

-YRSA, aka dem viking boobs
She's changed a lot, having no more Lizardman's axe i moved to spear, from there she developed more as a valkyrie-like figure, so i rolled with that in pieces selection.
Pieces are so rich that i chosen to DON'T add 3D items, very rare for me
She's kinda cool also with Mitsu's wide western sword, but after two swordmen i liked a different weapon for her (also one arabian char will get Mitsu's in next OC wave) 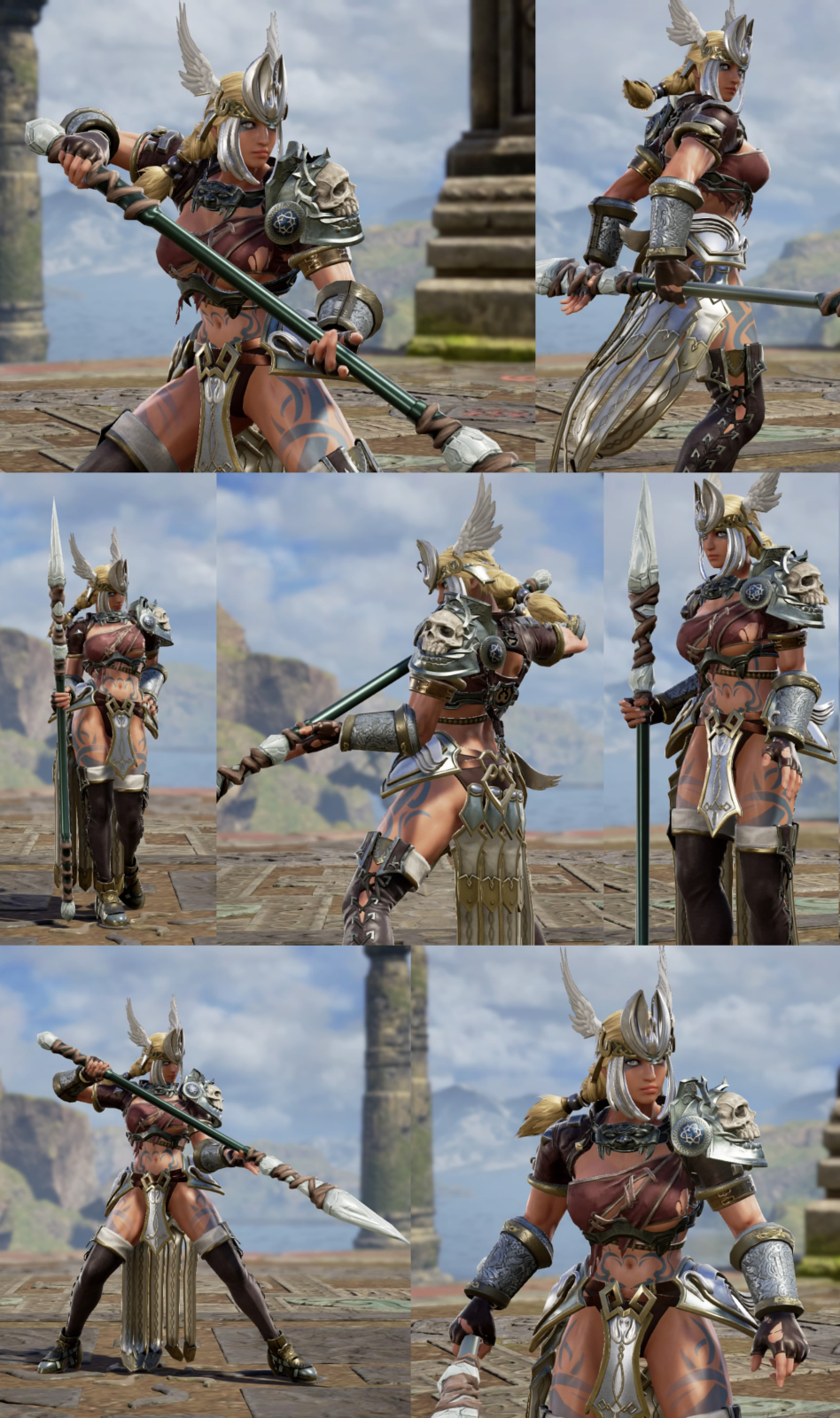 -SHAKA (name to change i guess), the african hunter... fun thing back then this used to be a 2 meter tall dude with a spear, end up drop that and turned it into a quick girl with knives. Life is strange lol.
Also iirc the char back then caused nonsense whining for pages, and i don't want any of that crap in my thread lol.
Let's see if she win some hearts, personally i like it ingame, Taki's style works on agile hunter vibe and her ninjutsu magic seem some magic shaman cool shit. Purposely chosen to not gave her tribal body paint, aside minimal make up... also because she cam right after chars with body paint (Dougall) and tattoos (Yrsa). I liked keep her without specially considering savana tunic and waist are very busy items themselves 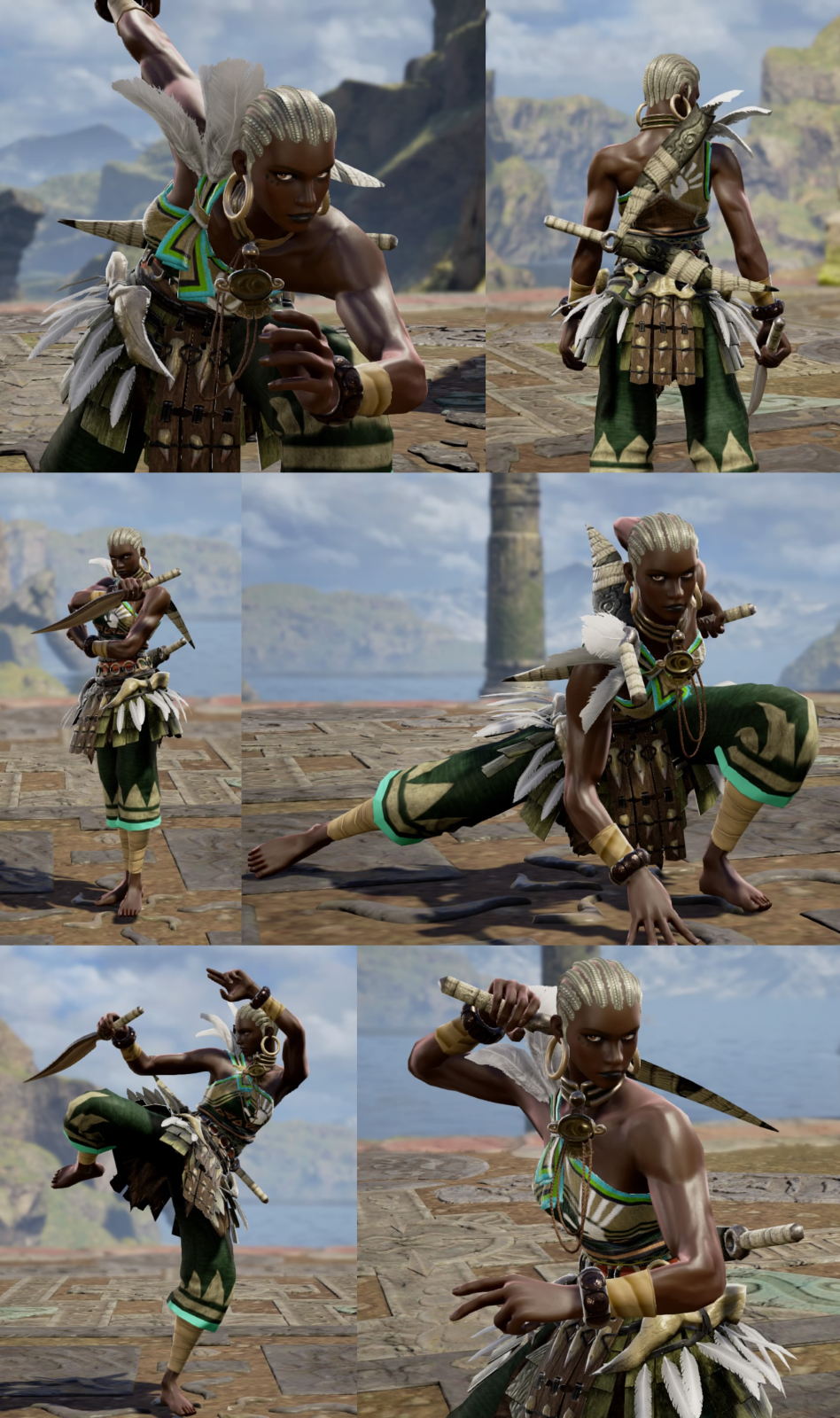 After them, will probably do some from the old sketches

Btw with all these weapons around thought was time to start add some "enemy" designs, chose to start on the "creature" side

- SANCTUM. Just had fun imagining an Elysium side version of Astaroth, what #TeamCalibur will create as giant on theyr side
I cheated a lot on this one lol, since i wanted him to be a GIANT i had to make it as Astaroth 2P.... CAS "height 5" was'nt enough for it
End up having in him a bit of SC2 Berseker 2P 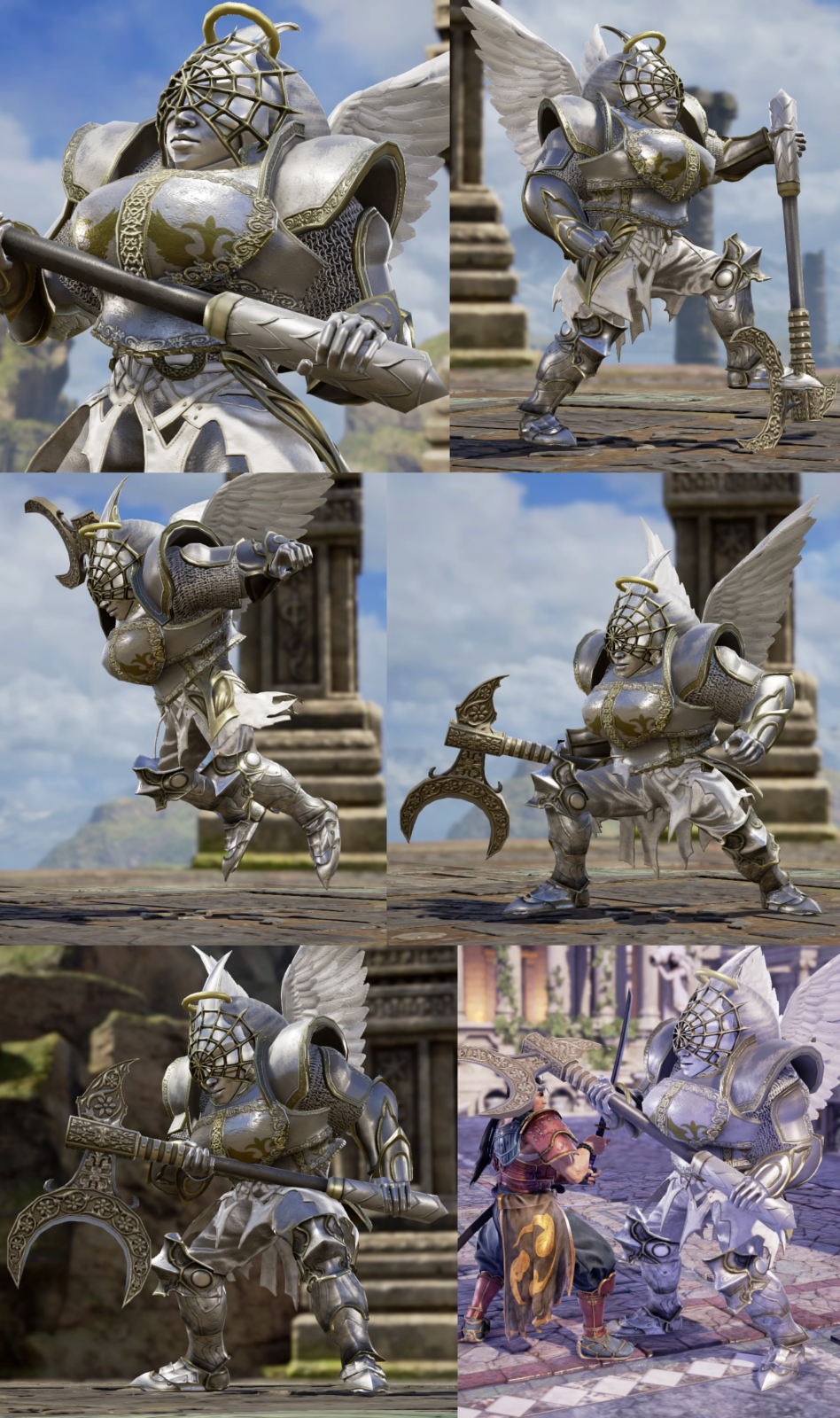 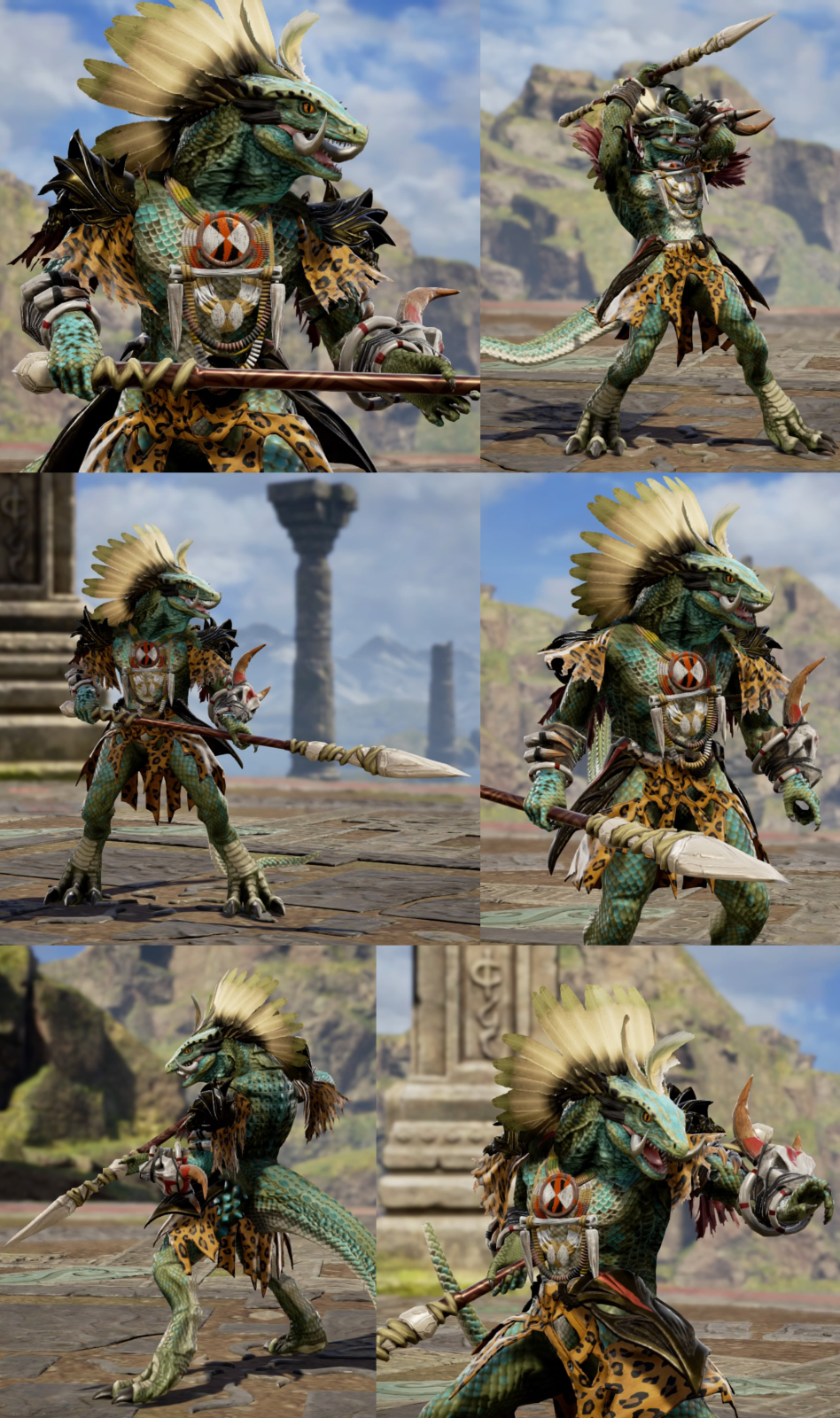 - NEW RACE: TURTLEMAN!
This has been fun to do my idea was'nt much create a specific char like "Aeon", but a generic standard race as "Lizardman" to work on it later.
One day will probably do the king of turtlemen, height 5 while this little badass is height 1, as normal for his race LOL 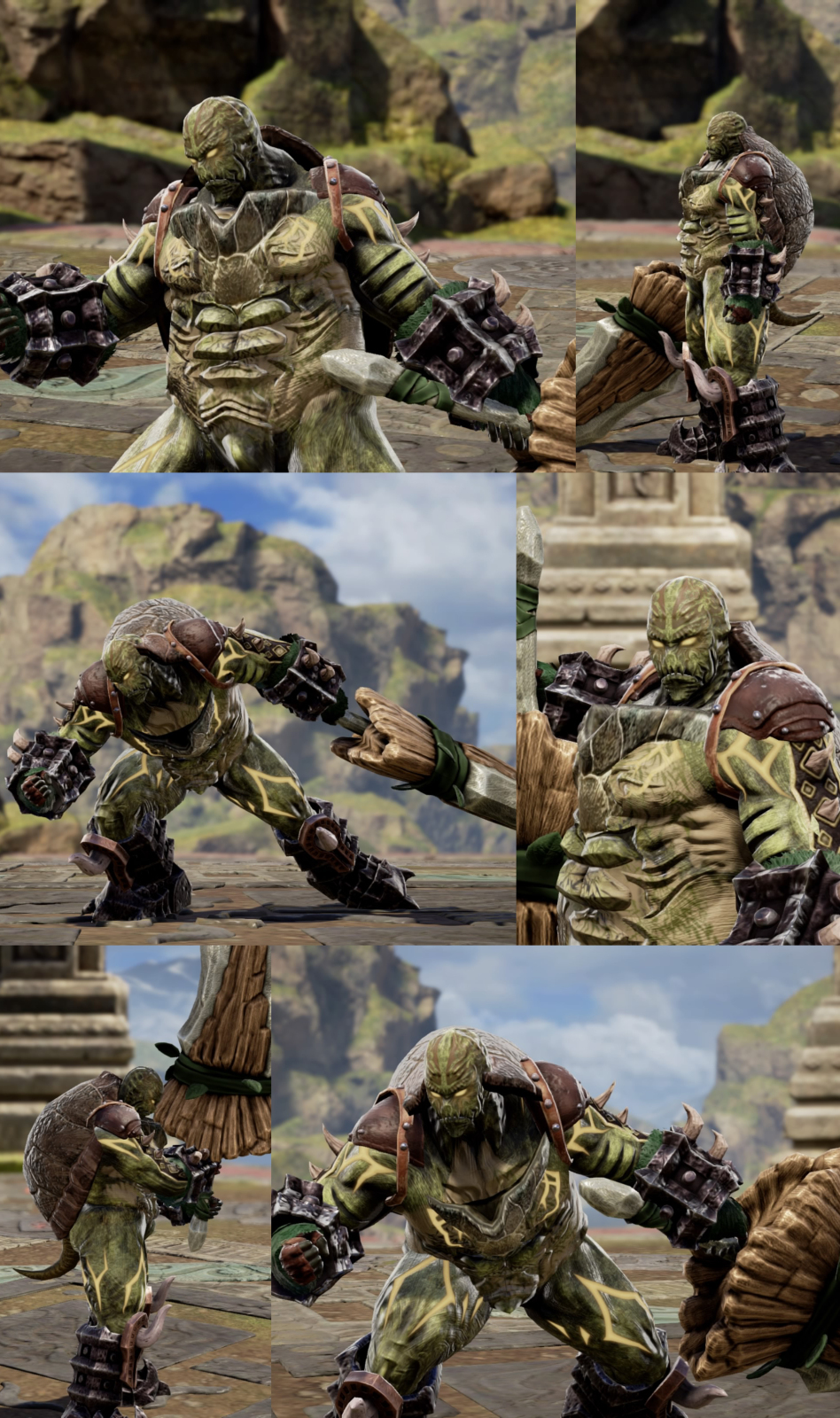 -Joke entry: The SPHINX
Challenge thread wanted a CAS that break humanoid shape as the alreaady legendary magikarp Voldo, end up with this 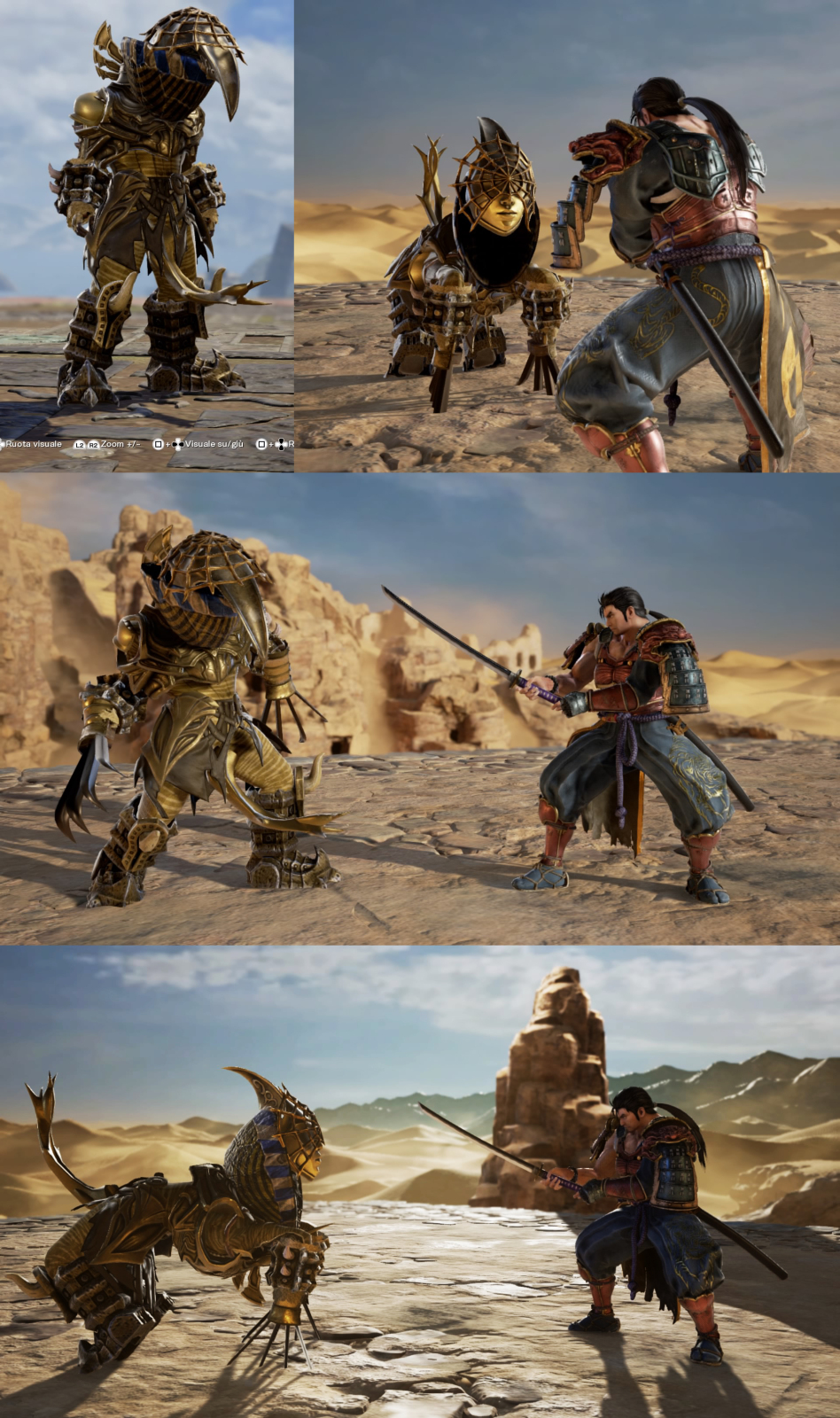 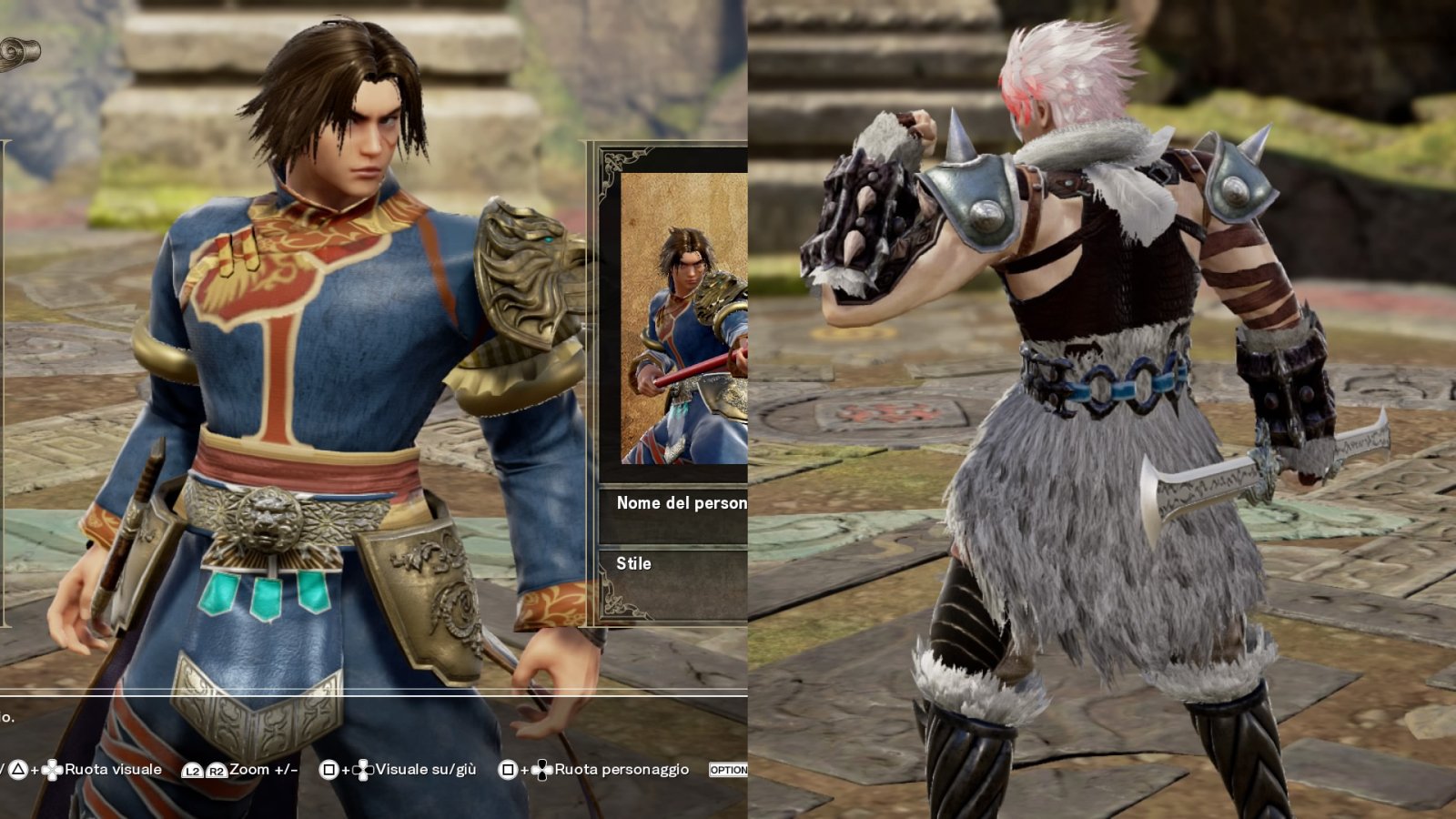 Marvelous, both of them!! Many thanks @Gatsu and very sorry if i caused you trouble

Now that's the kind of CAS I come here to see. :)
Lucio's got some style to him... but damn, that Astaroth, lizard, turtle, sphinx - fluffin' brilliant man. Jungle lizard and turtle especially are new favorites now. Dem reptiles don't get enough love.

Loving Lucio and Shaka. The latter reminds me of one of my own designs incidentally.

oh my god that sphinx is heckin genius
they're all lovely but, that sphinx is another level of creative engineering, especially considering the limited parts we have to work with

I remember the original drawings you did of these from back in the day. Good shit as always, G.

But I gotta say. SANCTUM takes the cake. The grotesquely exaggerated body proportions. The horrifically beautiful helmet. And the disturbingly clean armor. A monster straight out of Bayonetta.

Kieve said:
Now that's the kind of CAS I come here to see. :)
Click to expand...

If there's a thing i learned from the old thread is that everybody want something different... i got people that wanted me to do only recreations, others that came for the OC, others that want 2P/3P for the cast etcetc

Wich is cool to me as i like do all these things, each offer a different kind of design challenge
- recreation force to be loyal to the source, manage to do it with pieces avaible and stylize the design to stay in SC. It's about adapt
- oc is a chance to be original and experiment, but at same time i like replicate the concept process of SC cast. It's about creativity
-2Ps if well done need to stay loyal to the source ad basically put you in the condition to understand how they do it, before try yourself. It's about understand


Master_Thespian said:
I remember the original drawings you did of these from back in the day. Good shit as always, G.
Click to expand...

Thanks dude, second OC wave will probably still take something from that group of sketches, at least 2 or 3

So many great creations...every one is very well done. I love the giant Sanctum especially..... but my favorite is Turtleman....
He is amazing. :)

Oh damn. Why am I only just finding this thread now?
You're fukken nuts, dude.

Some more, now focusing on SC

Hilde (@brucege did her first, check his one too, we took pretty different routes for it!)
Fun thing i had to burn one 3D item to make her beauty mark 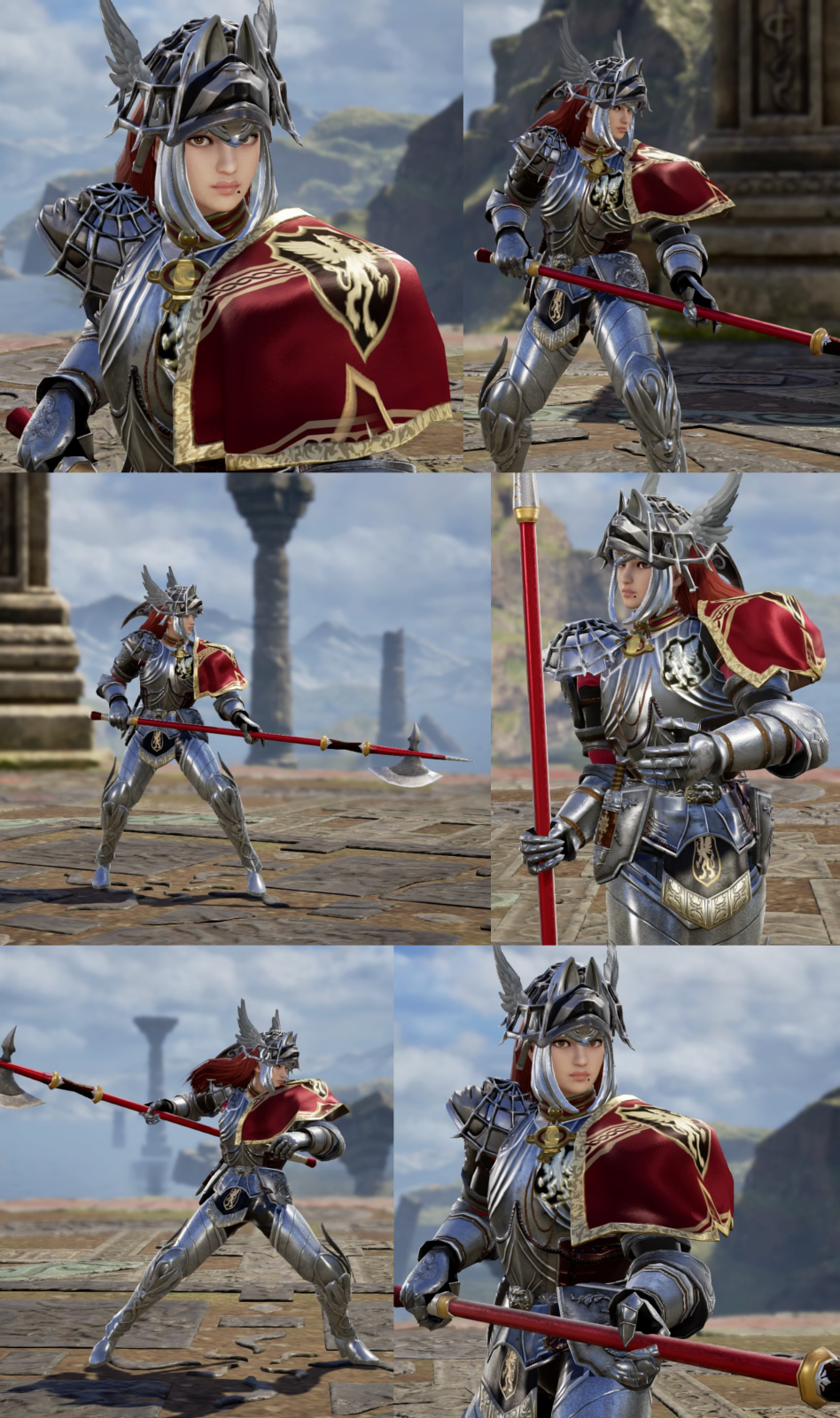 Mitsu as if the SE corrupted him instead Siegfried, essentially a "Nightmare" version of Mitsu 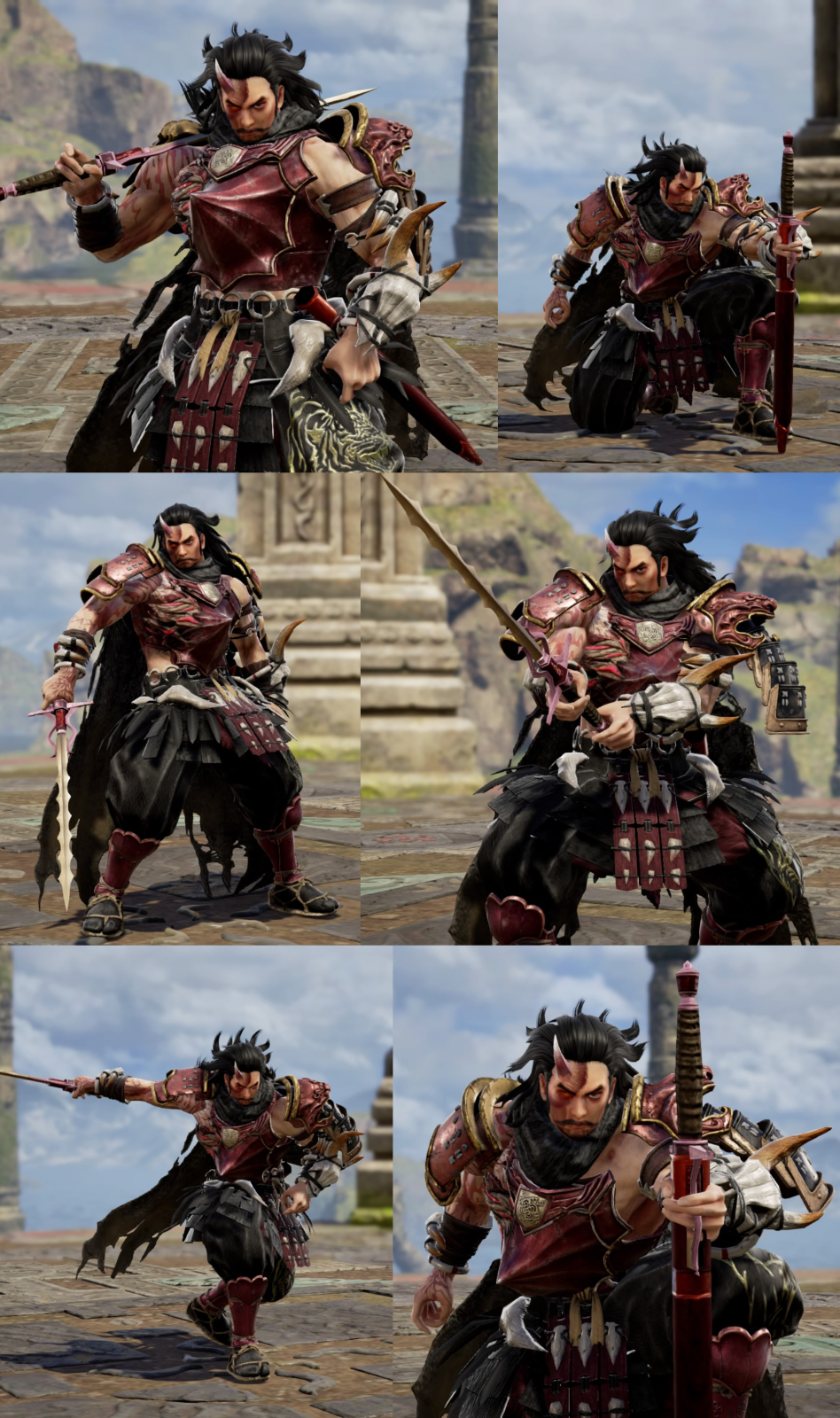 Night Terror from SC3, it's ugly af and was tempted to don't post it, but after all so was the original 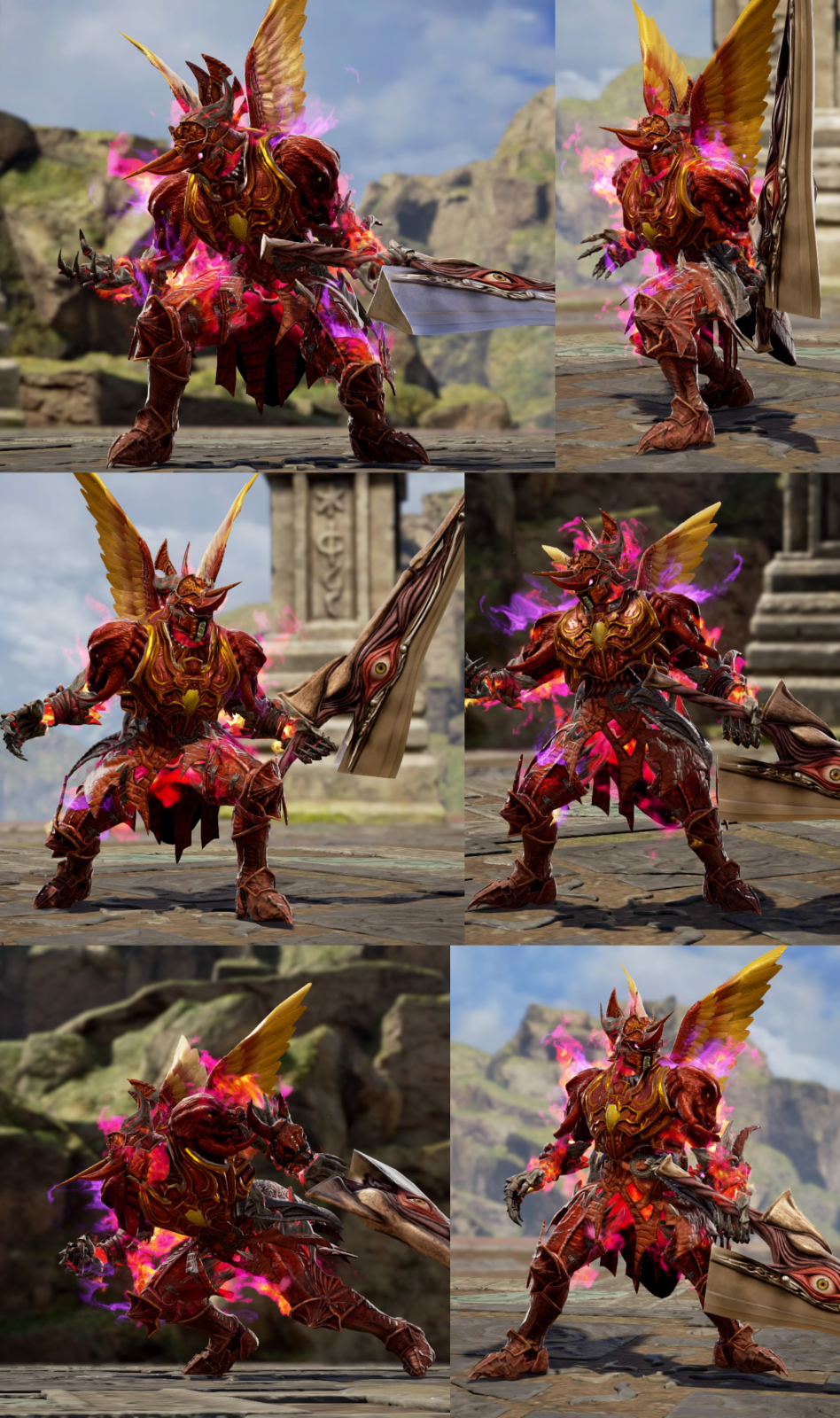 Fixed a bit the Sphinx 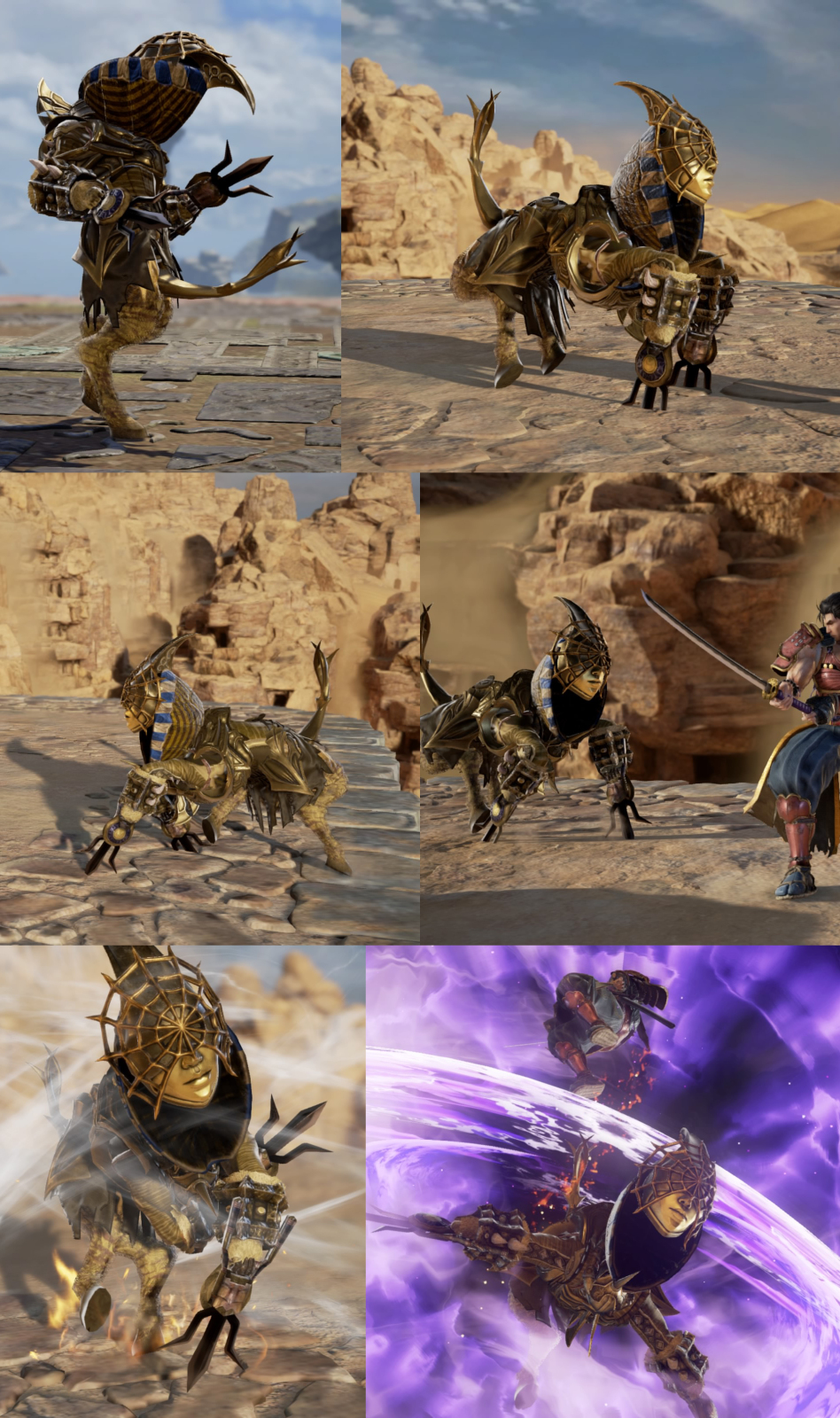 I know we have been lurking around each other's thread as always, but man :

For the beauty mark I wouldn’t even burn a ExEq. I just use the foot sticker in rotation and cover it up with a basic shape matching the skin tone. Unfortunately it may stick out a bit.

That is a gorgeous Hilde regardless.

I am curious about Nightsurugi’s one red eye...

Though late, here are my comments on Artie and Balthier. (I got a tad busy and i almost forgot them, terribly sorry)

Arthur looks amazing, i love how you used Siegfried's undergarments to give him an even more gruff look and, combined with the faded colors you chose, makes this recreation top-notch.

Balthier is just how i expected him to look like with Grøh's style, stunning work on all departments of his design! You nailed the characteristic color palette of FF12, the use of the ExEq goggles as his holsters along with the gun make him all the more faithful to the original, bravo

Edit: I let out a scream of hype and excitement the instant i saw Mitsurugi, how the heck did you pull off such a fantastic edit of him!? I applaud you sir, it became one of my favorites!
Last edited: Nov 10, 2018

Damn, that Mitsu custom makes me want to download his SoulEdge sword mod and recreate this for myself.

I am in absolute awe over that Hilde. Really beautiful work there. I wouldn't have ever thought to use Voldo's mask with the Valkyrie helm to make a proper helmet.
And the sticker/item work on Mitsurugi is next level lmao. Unmatched as always.
You must log in or register to reply here.
Share:
Facebook Twitter Reddit Pinterest Tumblr WhatsApp Email Link