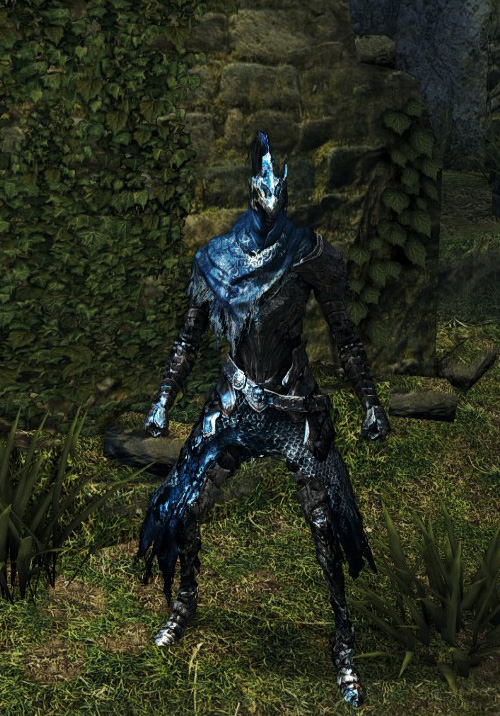 Fits the universe really well and would probably have a bunch of fun moves to learn. I would pick this boi up in an instant.

HogisGuy said:
100% agree with Max on this one.

Fits the universe really well and would probably have a bunch of fun moves to learn. I would pick this boi up in an instant.
Click to expand...

It really would help that the Dark Souls series is incredibly famous and its on hold. So giving players another chance to see a famous and iconic franchise that they don't expect to see anytime soon would hype SC6 a lot.

Wishlist:
PS4: Bloodborne Hunter with Saw Cleaver and Blunderbuss. Secondary weapon-mode moveset change-up like Ivy in SCIV (etc.), blunderbuss could be operated through gauge use or a move that would work like UP on the D-pad in bloodborne--hurt yourself a bit to get a quicksilver bullet. It'd work like a GI--that would make the most sense--and a ranged GI is unconventional and could get out of hand--hence the HP cost would balance it somewhat. He'd be about Ezio's speed and range on most things. CE could be a Visceral attack.

Xbone: Jago or so0me other poster-boy for Killer Instinct makes sense to me... NO Master Chief.


Switch: Link or Marth--most likely Link given his SCII entry and the popularity of BOTW.

PC: Possibilities are endless on this one... No idea.

Won't happen, but I want it to: Guts from Berserk. Raiden from Metal Gear.

Cloud would be dope, Lightning would be pretty cool.. I heard someone mention 2B (Nier) on a different forum and that caught my interest, especially if they give her multiple weapons.

Oooh... someone said it already, but William Adams (Anjin) from NIOH would be rad... Get another take on a samurai character other than mitsu.

I think Kratos AND his son Atreus from God of War 4 would be great picks. I know Kratos was already a guest character in the SC series, but Broken Destiny wasn't a main console release, so it really doesn't count to me.

As of now, we don't know much about Atreus from the GoW4 gameplay videos, other than his ability of using bow and arrows and lightning. It would be interesting to see how Namco Bandai handles his fighting style (if he will be included).

xragnarok645x said:
I think Kratos AND his son Atreus from God of War 4 would be great picks. I know Kratos was already a guest character in the SC series, but Broken Destiny wasn't a main console release, so it really doesn't count to me.

As of now, we don't know much about Atreus from the GoW4 gameplay videos, other than his ability of using bow and arrows and lightning. It would be interesting to see how Namco Bandai handles his fighting style (if he will be included).
Click to expand...

I understand the inclusion of Kratos, not because SCBD wasn't a main release, which is irrelevant, but because Kratos now would have a different moveset. Atreus, on the other hand, has yet to gain popularity, so he would definitely be unlikely, specially alongside his father.

Aeon copied it in V for the most part

Ah. I miss SC4 lizardman. I made this crazy lizard girl and did the low cheese online.

Oh those were the trolling days.

Jakajantiamu said:
Ah. I miss SC4 lizardman. I made this crazy lizard girl and did the low cheese online.

Oh those were the trolling days.
Click to expand...

Yeah, if I remember, they let him keep the crawl stance that made him unique but gave him dual axes and kratos movesets in part v. People were suspecting that lizardman was becoming the amalgamation of prior guest characters... Which if you think about it suited it perfectly.

Party Wolf said:
From what I understand it was a communication error. There is a Fire Emblem VA who voices an SC character.
Click to expand...

I think I can address this now.
Yes, that is why.
And the character who shared a voice actor voices a character on both SC and FE.
That Soul Calibur character was one of the 4 that were most recently revealed, and a veteran character.
People should be able to deduce that fairly fast.

As for a guest character, I just wanted to say that the two most requested characters for Tekken 7's guest character were Kazuma Kiryu from the Yakuza series and 2B from NieR: Automata.
Instead we got Noctis. Because.... reasons?
I still think it had something to do with executive meddling on Square Enix's part and pushing him on Harada instead of her. Or they cut some kind of deal where getting him on Tekken 7 meant they could use 2B on SCVI. Who knows.
But I don't think anyone should be surprised if her success as a requested character for Tekken 7 paves the way for her being on SCVI.

No, I don't know at this moment who any guest characters are from my main and most reliable source, so this is not some kind of hint or stealth confirmation from me. But this is an important factoid to consider with Tekken 7's most requested guest characters, and how 2B was someone people against her inclusion were only against her because "she'd fit better in Soul Calibur."
Oh if they only knew Noctis was awaiting them on the other side as the choice at the time. lol

A lot of SC and FE characters share VAs.

I think it'd be cool if we got a Mortal Kombat guest since Kratos was in both MK and SC as a guest and Tekken 7 already borrowed two iconic fighting game antagonists. Sadly Ryu Hayabusa doesn't seem too relevant at the moment but he was also arguably a guest in the same way as Guy, Cody, and Yoshimitsu (at least in SC they're previous bearers of that title) are.

Geralt from TW and a Dark Soul Character actually have some high chances, since Dark Souls are Bandai Namco IP i think (or at least they have a huge part on it since it's edited by BN), and The Witcher 3 was distributed by Bandai Namco as well (In Europe at least)

Those would fit both gameplay and aesthetically to SC, and both are multiplateforme (if they don't want to make exclusive console character), and it wouldn't be too hard for BN to put those since they have some kind of tie and relationships to those IPs.

If they have plans for exclusive console character, Kratos 2018 and The hunter (of some other character from Bloodborne universe) would be the best picks for me. William would be another pick as well for PS4 but i doubt they'll go with this one, since he's less popular than the others, and they have to go through both Tecmo and Sony while with Kratos and Bloodorne Huntr they only have to make deal with just Sony, and those kind of deal are in general pretty fluid to do with Sony compare to other companies.

I'll be honest. I think it's dumb that some fans' favorite character is certain to be cut from SCVI (Hwang, Siegfried, Rock, Seung Mina, or Hilde) but at least one guest character is guaranteed.

But then I started to think about the phrasing of "collaborations with other works." There were a few other games that collaborated with Nier: Automata (Let It Die and Gravity Rush 2) and in both cases it resulted in costumes (rather than characters) being brought over.

What if Namco-Bandai were to release character creation materials based on other series, and also (as a half-measure of sorts) made one SC character the "official" representative of that costume? So if players don't care about character creation, they might still be willing to buy the costume as a cool (or goofy) alternate for their favorite character.

Probably won't happen, but it would free up room on the roster for more SC characters.

SoulCalibur III had a good number of that sort of thing, actually, though from Namco franchises only. KOS-MOS being the most obvious, of course, and just below that (mostly because it was Cassandra'a 3p in SoulCalibur II) Valkyrie, but also Gil and the hat of Neneko, from the top of my head. So it would be pretty cool, in a way, to bring that sort of thing back. The biggest problem I've always had with custom creation DLC "guests" is the lack of them being a true character due to not having one true way to make them and also not having a specific voice and related quotes. It could happen, for sure, but it's definitely a bit less special.

Like always I prefer NO guest characters at all, but if there has to be one I really hope is someone that fits the medieval feeling of the game, not someone from a sci-fi series or a comic. Ezio or Kratos were acceptable guest characters.

My hope is Aranea Highwind from Final Fantasy XV. Historically, female guests have been lacking, so it would be nice to get one for a change. Aranea would make a fine one, a fresh take on the classical Dragoon archetype from the Final Fantasy series, she uses a spear and has a great mix of melee and aerial combo potential, as well as having a Critical Edge basically already made for her in her signature technique, Highwind, where she jumps excessively high in the air and delivers a calculated crushing blow that leaves the target completely devastated. The Magitek core reactors in Final Fantasy XV also give a power buff that wouldn't be unlike Soul Charge, so that fits as well. She also already has a 1p and a 2p in her primary design from the base game and her new design from the DLC Episode Prompto.