Amy, Raphael, Tira and Nightmare at TOP is No.

Groh at High Tier is No.

Mitsurugi at Low Tier is No. 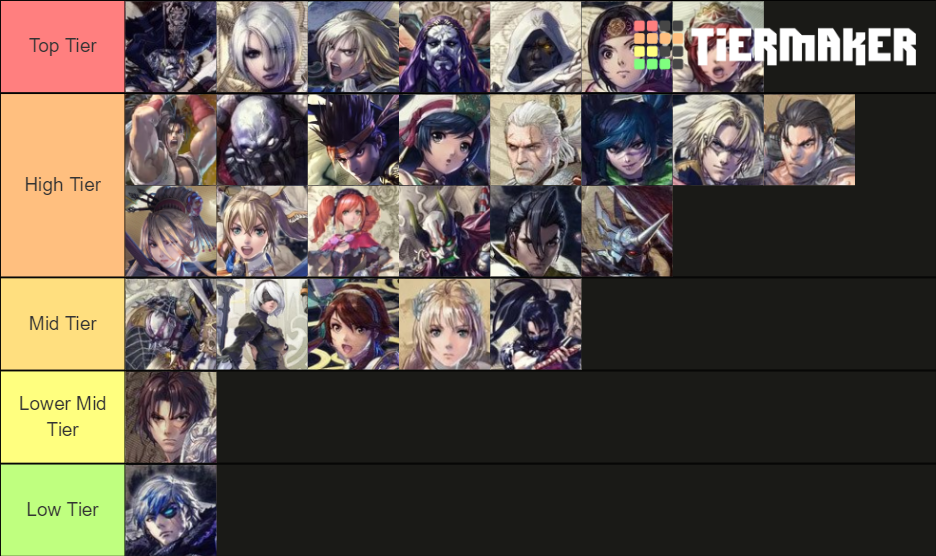 I've never understood the arguments of Groh being low tier, I have a harder time fighting him than I do half the other cast.

sytus said:
I've never understood the arguments of Groh being low tier, I have a harder time fighting him than I do half the other cast.
Click to expand...

Well, I personally wouldn’t call Groh a low tier (mostly just a mid tier for me). He does have a decent neutral game and the tools to play it, alongside a really fantastic Soul Charge. He does however have a major weakness to i10’s, subpar damage outside of SC and a lack of reliable tech crouches. Someone like Raphael easily takes advantage of the first and last issue mentioned. Someone like Voldo does not have those issues.

sytus said:
I've never understood the arguments of Groh being low tier, I have a harder time fighting him than I do half the other cast.
Click to expand...

You need more experience playing against Groh, that's all.

He has the WORST throw range in the whole game with his T-rex range so he has no throw game at all and add the pushback for throws that has been added, that makes his non existent throw game even worse.

You are playing a character without throws perse and also, he has no worthy lows to speak of. Avenger A isn't that great and 1K and 2A+B suck (this one is a little better in Soul Charge).

His only lows that are worthy are 1A, 1B and 3A+B, which are small damage and don't knock down. So, opponents don't need to respect his mixup game that much.

Granted, the new 1aB is ok and gives a semblance of a mixup game but it still ain't good enough to beat Standing G.

Avenger stance is just ok and has mobility but it ain't also nothing to go wild about.

Groh's Soul Charge game IS good (his big ace) but again, he needs meter to go Unga Bunga and there are better characters that are just as deadly in Soul Charge so, that's not a good unique thing for Groh.

It keeps him competitive. You can play him and win but he has CLEAR faults by design and the system doesn't help him.

Good neutral pokes and nice mobility but he is only real aggro in Soul Charge and that's not unique to him so yeah....

Groh is clearly the worst character in the game.

Party Wolf recently got Second at an online tourney and he has been preaching the goods of Astaroth for a while and Sayine was all sarcastic mocking Astaroth like "Thank God he is sooooooo weak, the weakest in the game, etc."

Yeah, Astaroth is weak in SC6 is just a meme.

Groh is topten easily. Man all those downplayers are unbelievable. He got the groove he got the hair. He got the sick jumps tell me anything the guy doesnt have ?... Yikes man he's probably even top 1 right after his style buffs and the game changes.

Taki was going strong with the buffs but i noticed that after patch 2.10 she got indirectly nerfed on a lot of moves

Because I was bored (and I’ve yet to really finalize my own 2.30 tier list) I decided to make a “fun factor” tier list:

Just my personal opinion of course.

I can’t say I really agree with much of this list at all. The Voldo placement in particular I disagree with completely.

I can’t say I really agree with much of this list at all. The Voldo placement in particular I disagree with completely.
Click to expand...

Id say zedds tier lists are usually pretty accurate. He does alot of labbing n stuff. The only real hottakes in this one is putting mina and sieg that low tbh.

Well I decided to make my list at last...

I got bored. Not rating hwang cause he is still too new and i didnt buy the dlc to begin with. But he seems pretty Unga so probably mid/high b tier.
And I refuse to accept that 2B is a character. 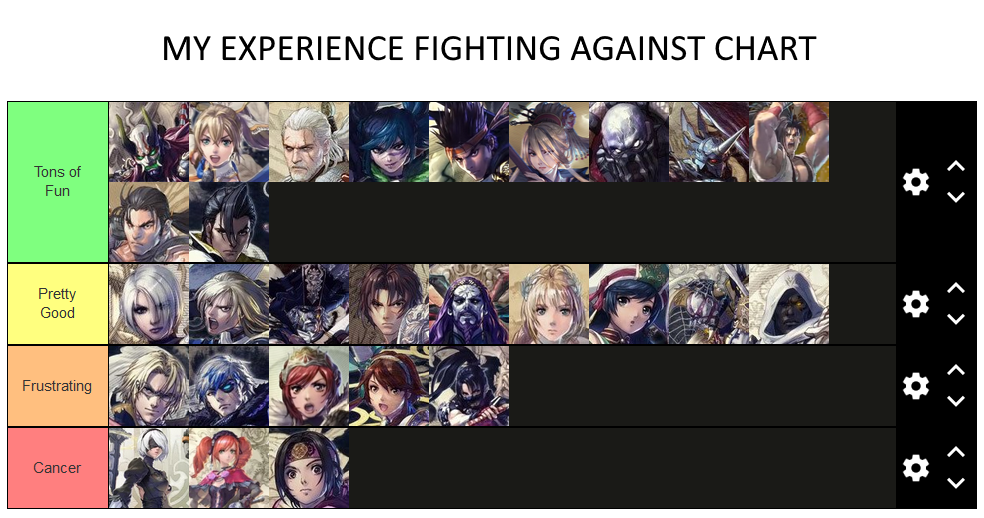 I guess that matchup chart list is pretty accurate. Cant really say I disagree with alot except for two odd ones. Being how the hell is cassandra in Lots of fun tier. The character that is entirely based on mashing your face on your controller with constant Plusframes .Its hard for me to even think of a character that is more unga than her maybe aside from Talim and Amy.

Also Hilde in Frustrating Tier. I mean i guess thats personal preference but to me Hilde doesnt really have anythign frustrating. If you lose to Hilde you mainly just get outplayed at fundamental Calibur. Its not really some unfair BS (Just as far as her base moveset is concerned. If it is about her just being super strong and deserving nerves then yea sure).

Yea but mainly the class placement

@Foot
It's just my personal chart, I wouldn't take it as a general rule. The reason Cassandra is in the lots of fun category is because I have lots of lobbies with a Cassandra player, so it fair to say I'm used to the animations she does and how to counter them. As for Hilde it's probably my lack of knowledge that frustrates me, but sometimes I wonder if it's online that fucking with me because it's really annoying getting caught by the tip of her thrusting spear when I'm clearly sidestepping. I don't know if my opponent is abusing online attacks or it's part of her design.

Yea its alright. Of course all of that is personal opinion. I was just curious as to why Cassandra is so high up when she is so similar to other "mash friendly" characters like talim and amy who are way lower.

Its just interesting to me how perceptions of characters shift even compared to pretty similar characters .

Why is Amy still ranked as Top Tier when she was heavily nerfed and even with Purple, all the stuff that made her good in Purple was nerfed. You could say that before, she was Top 5 in Purple but that's clearly not the case anymore so why is she Top when the nerfs are REAL?

Why is Raphael in Top Tier when the nerfs hit him as well, just not as harsh as Amy?

How is Ivy lower than Amy?

Why is Sophitia in High Tier?

Why is Azwel in Mid Tier?

Why is Siegfried in Mid Tier?

Why is Astaroth in Lower Mid Tier when it has been proven with evidence that he is Top 10?