My new collection is all about SC universe, trying to build up my “Ultimate SC cast”.

As we speak i got 75 characters done, will like to reach 100 and got some ideas for that

In some cases i'm gone for 1-1 recreation, some others i'm gone for heavy reinterpretation if not straight redesign... like i did in the past rather than be loyal to a specific costume-design (wich namco itself change heavy game after game) i try to be loyal to best examples of SC design style and the spirit of the character.
With some minor characters has been really fun, namco got so super lazy ass on these cas npc (poor Hilde's dad LOL) that i had to rebuilt from zero... these were my favourite to do :D

As general rule if they done a minor char with poor detail that scream "cas", i did whatever to bring that char to a level of detail that aim at compare with standard cast 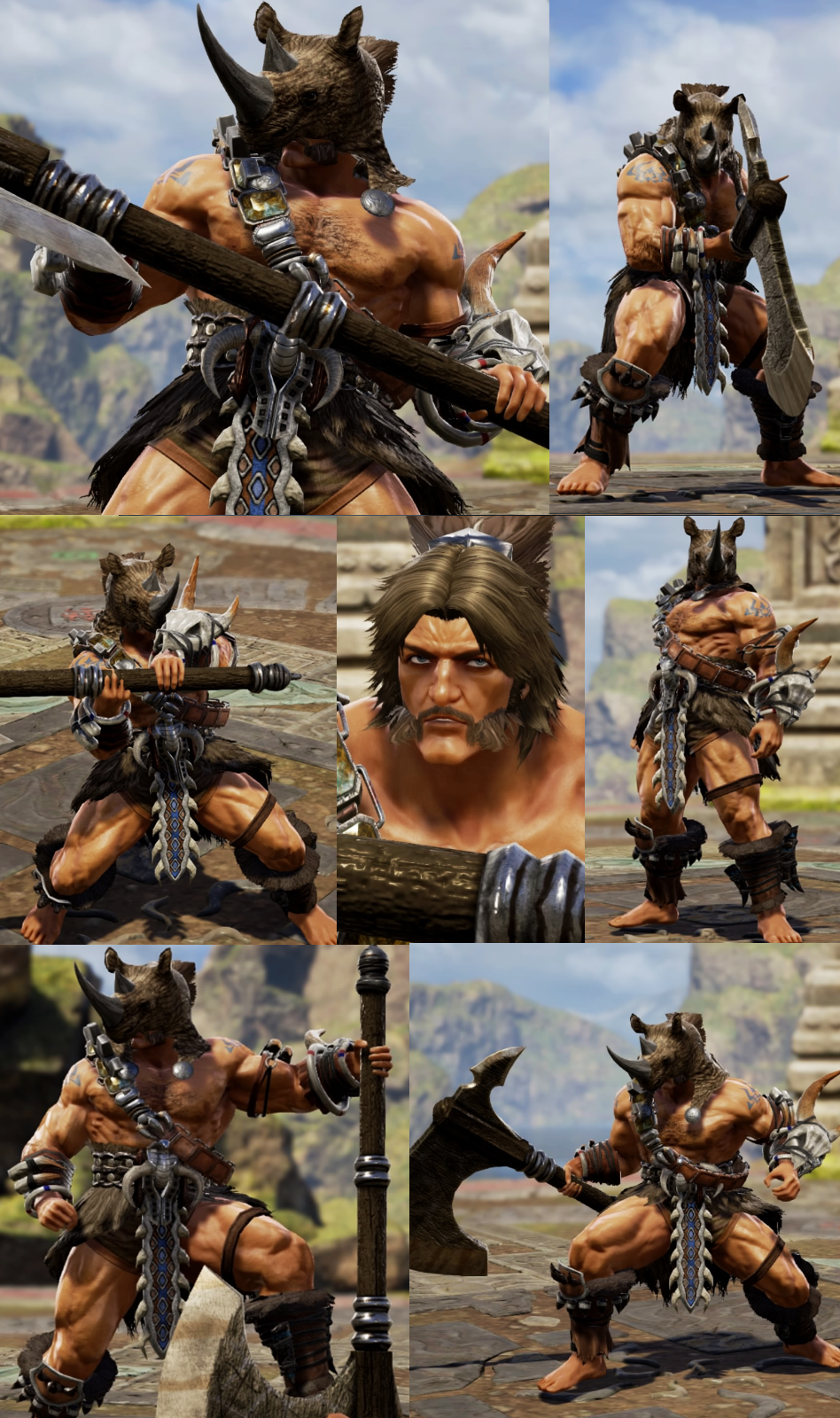 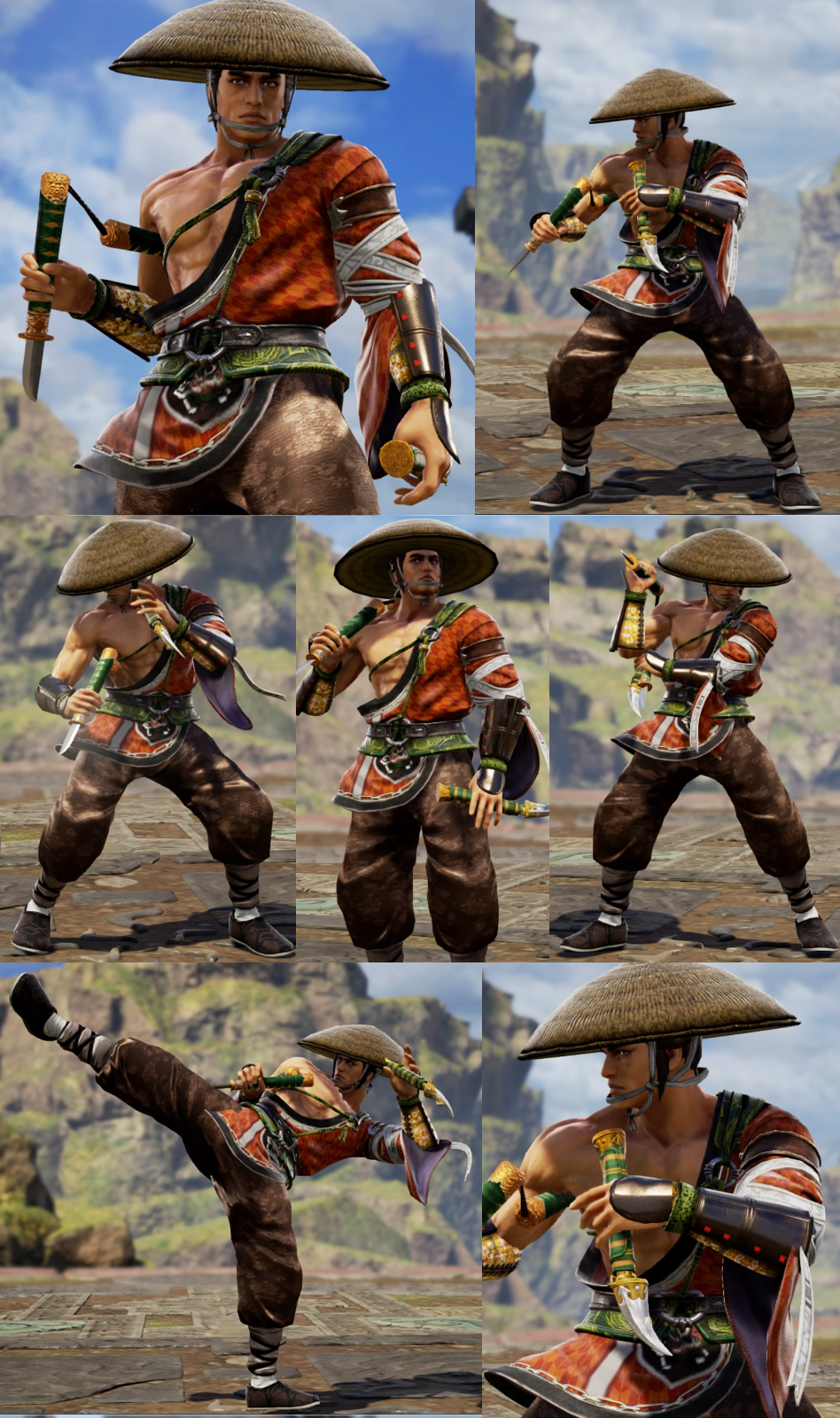 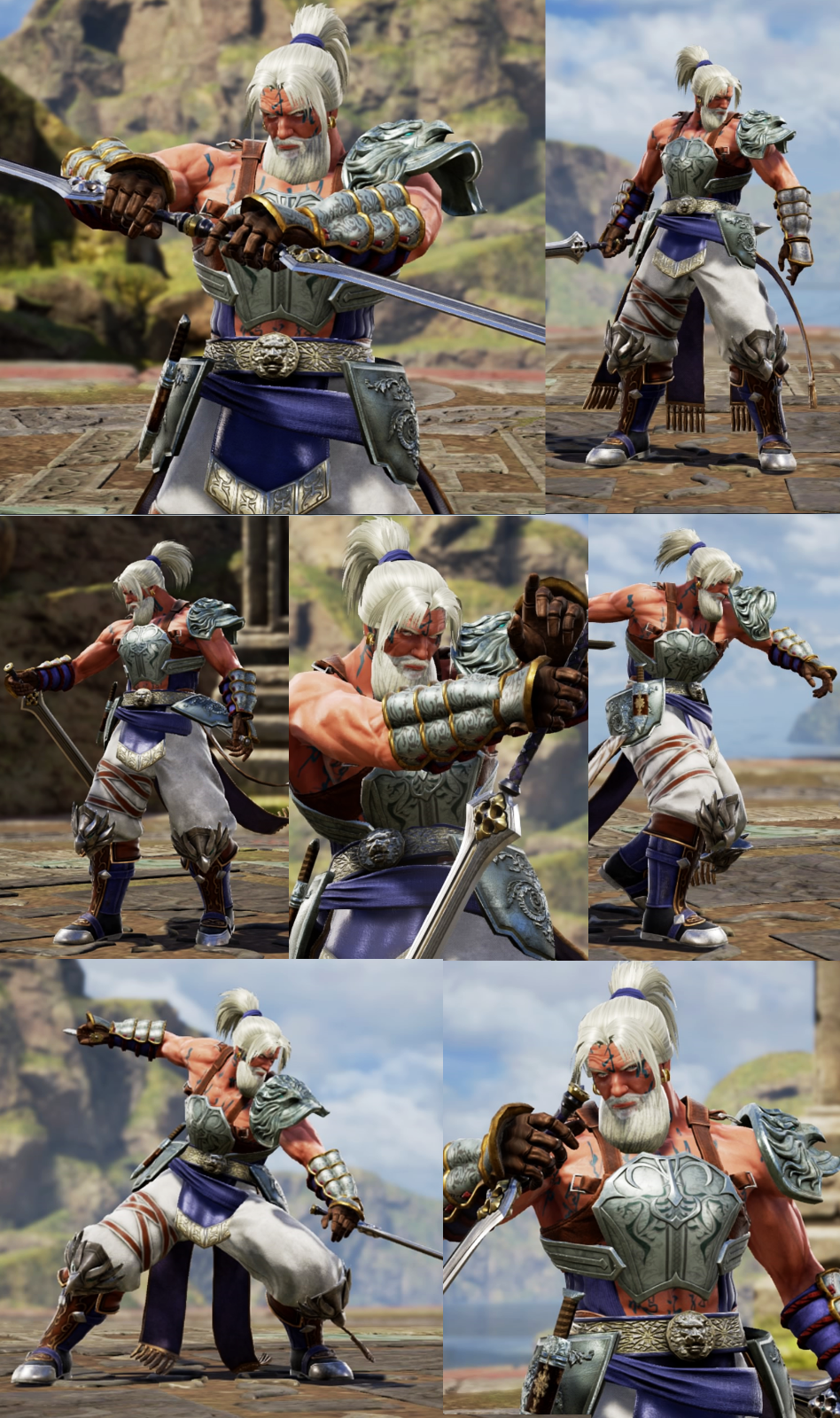 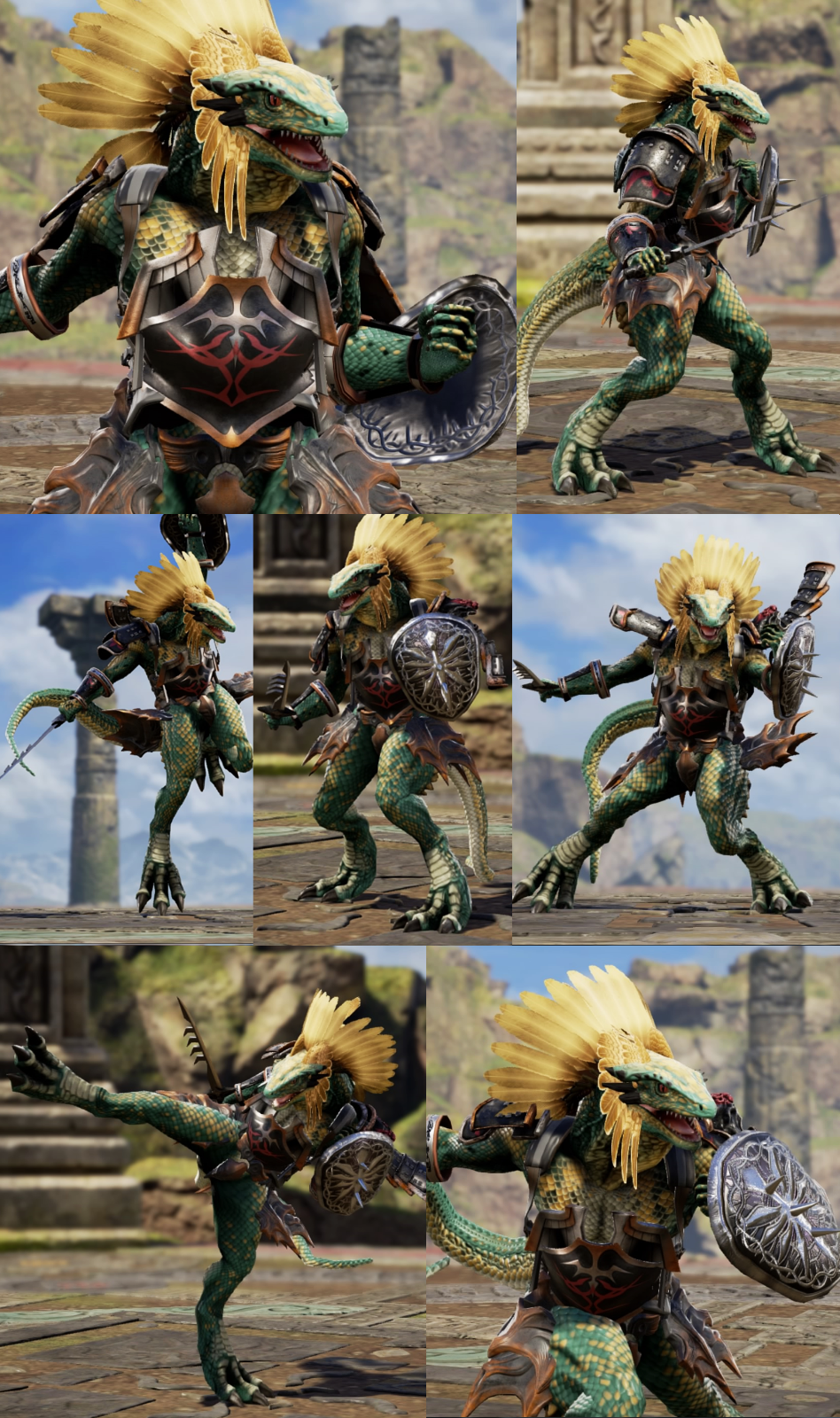 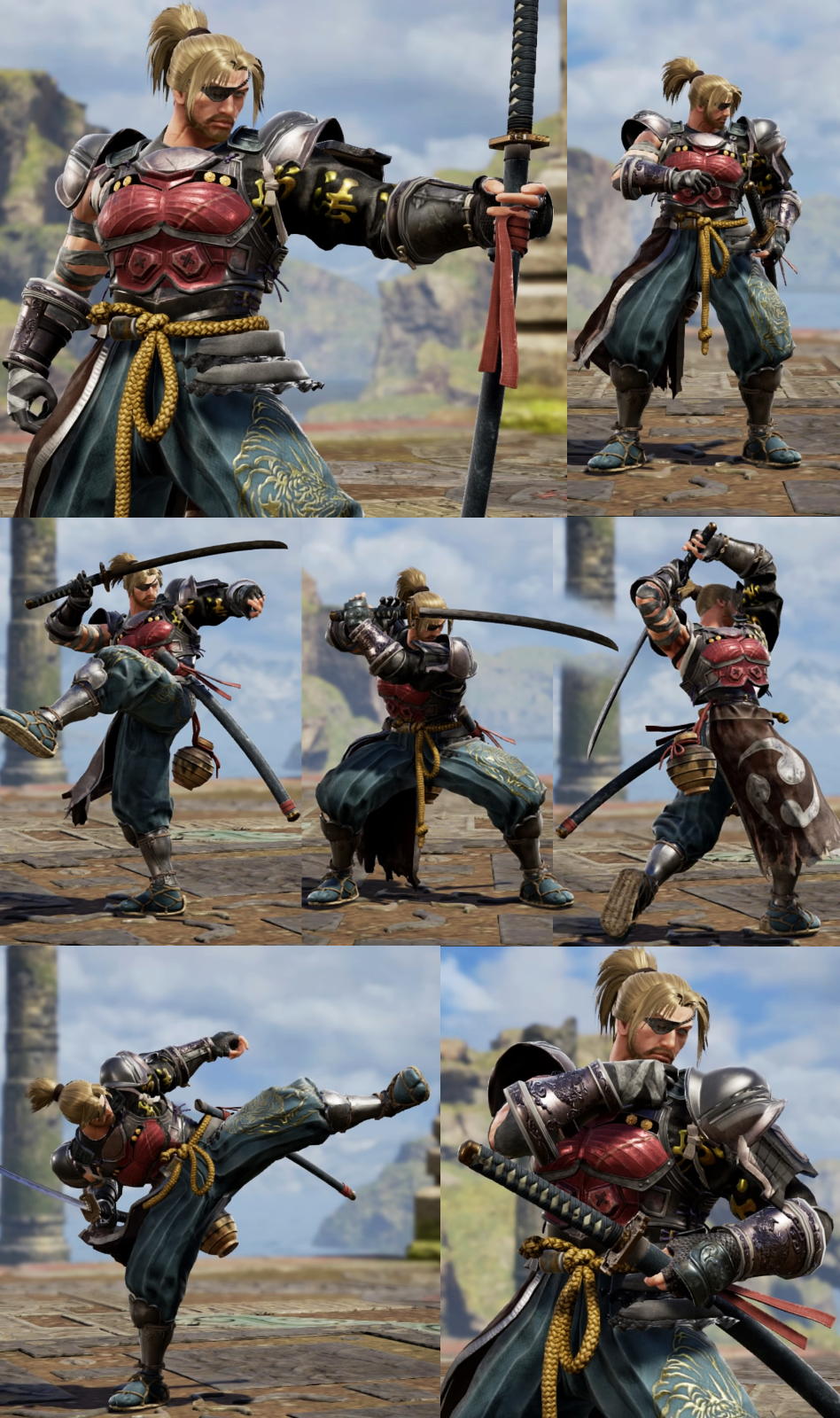 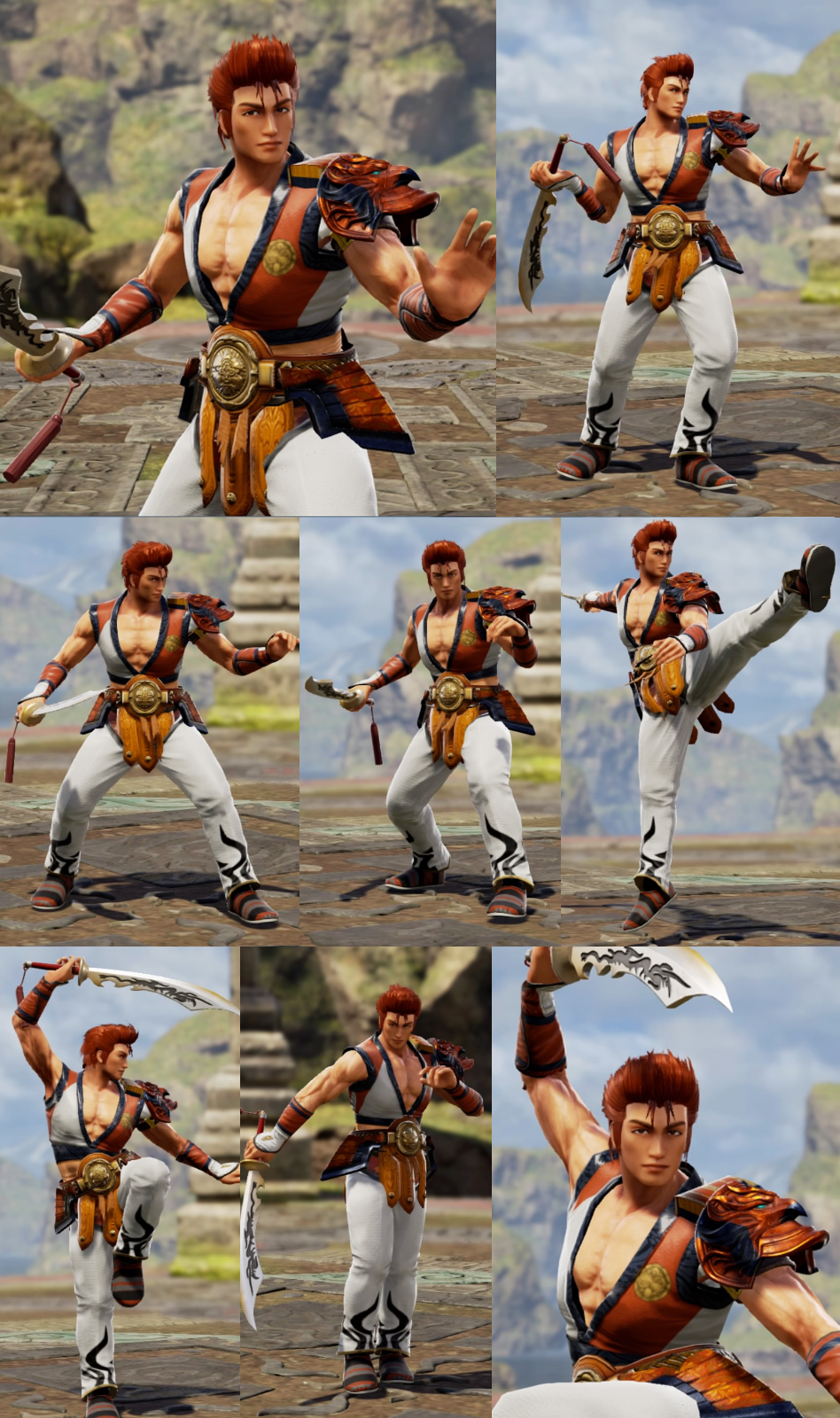 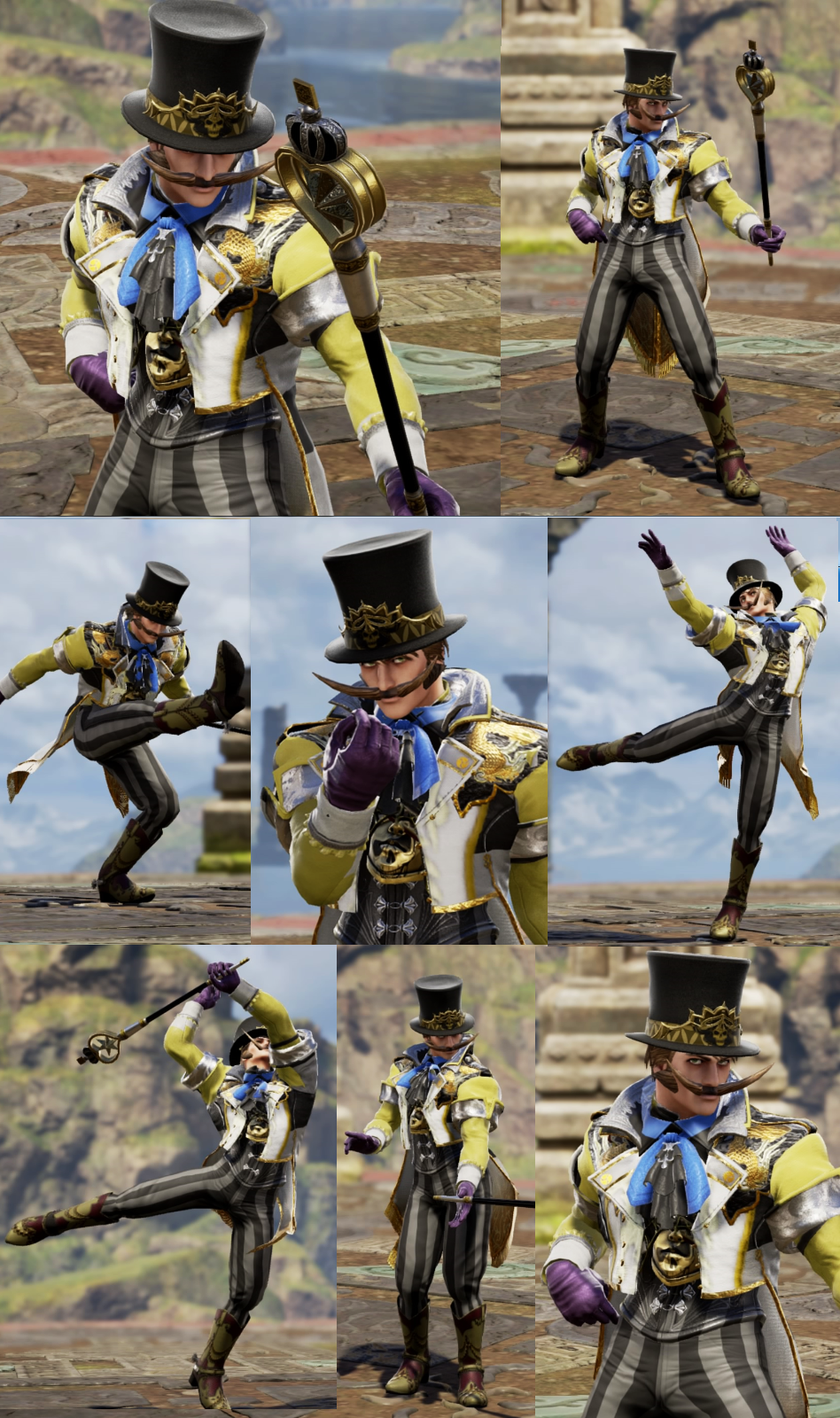 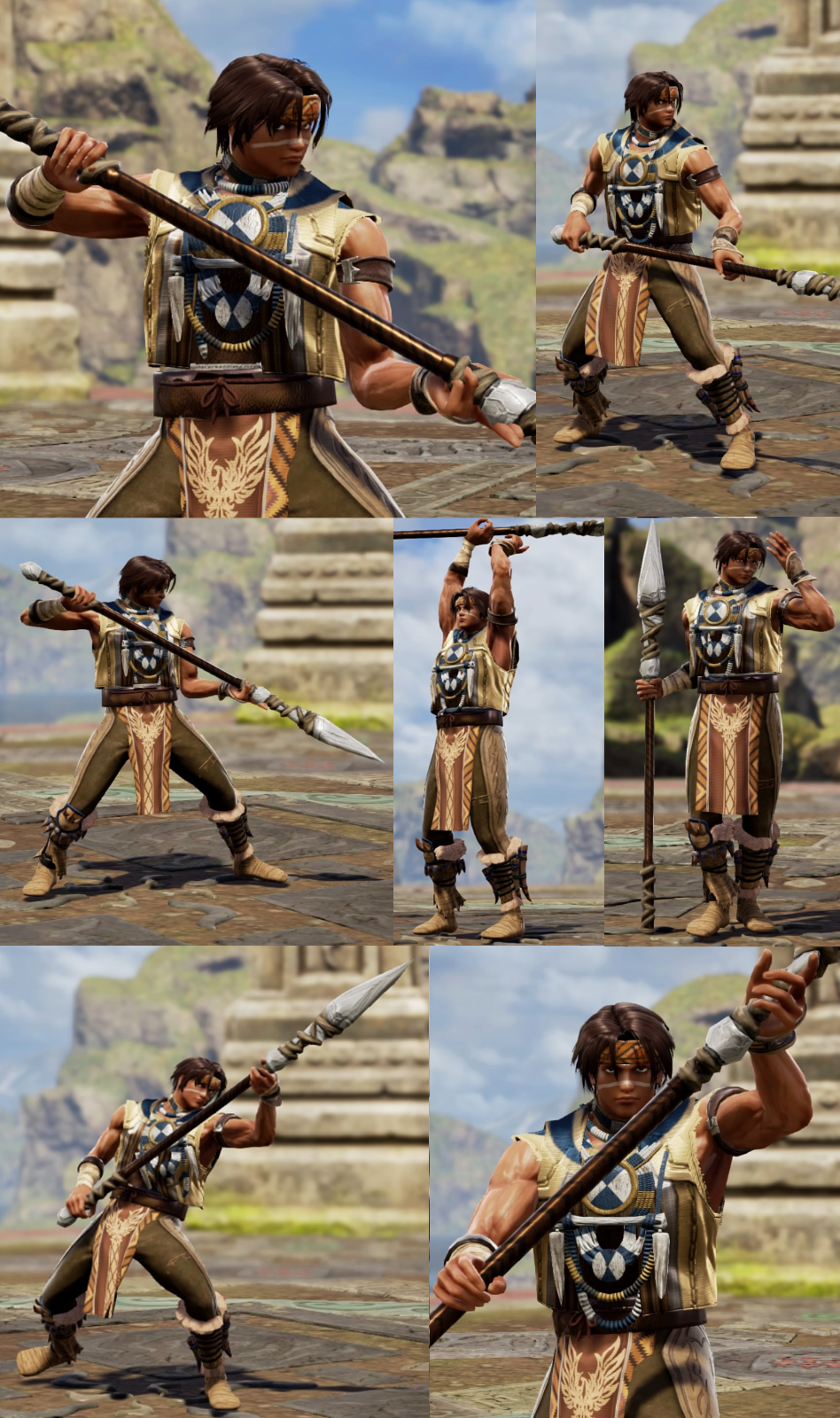 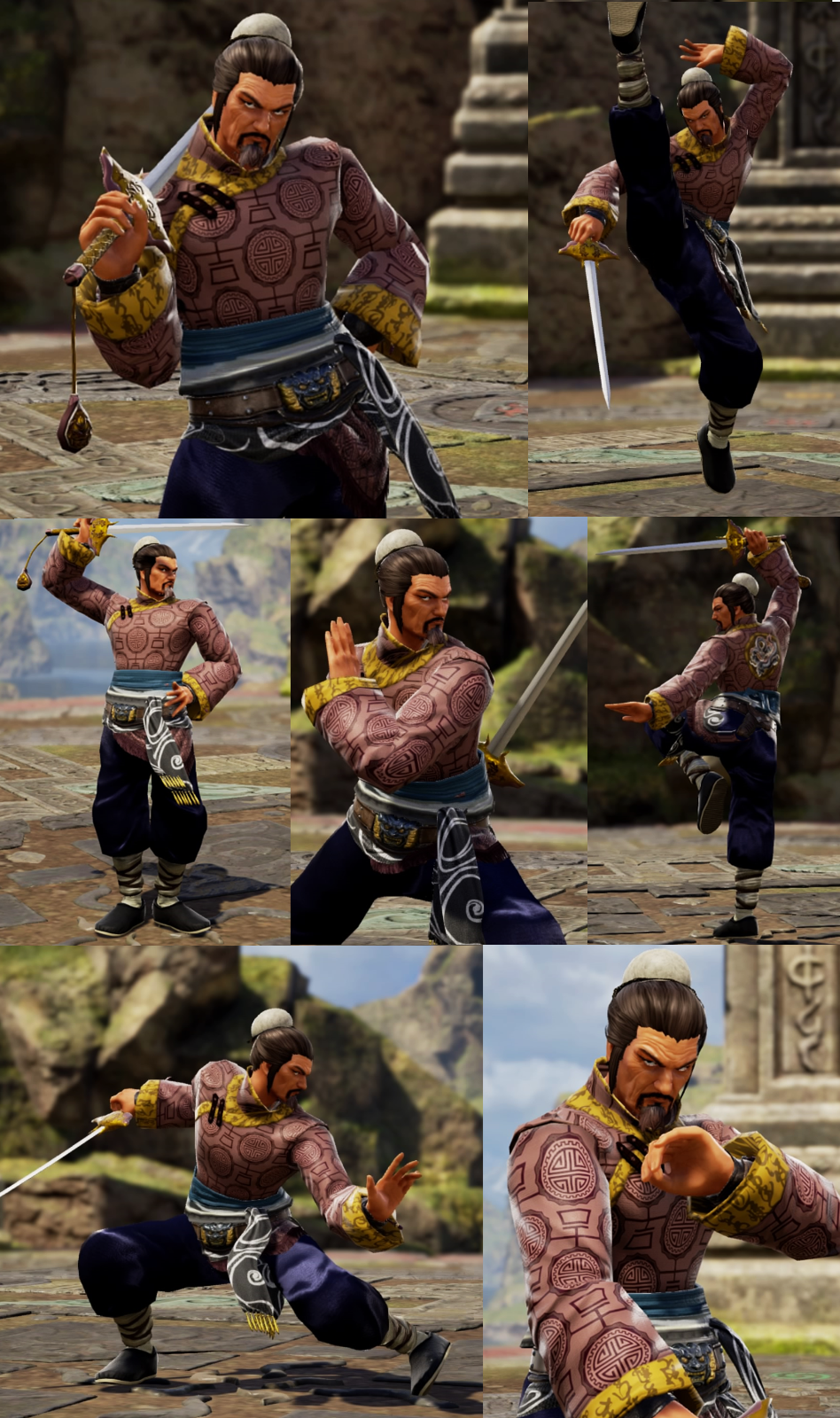 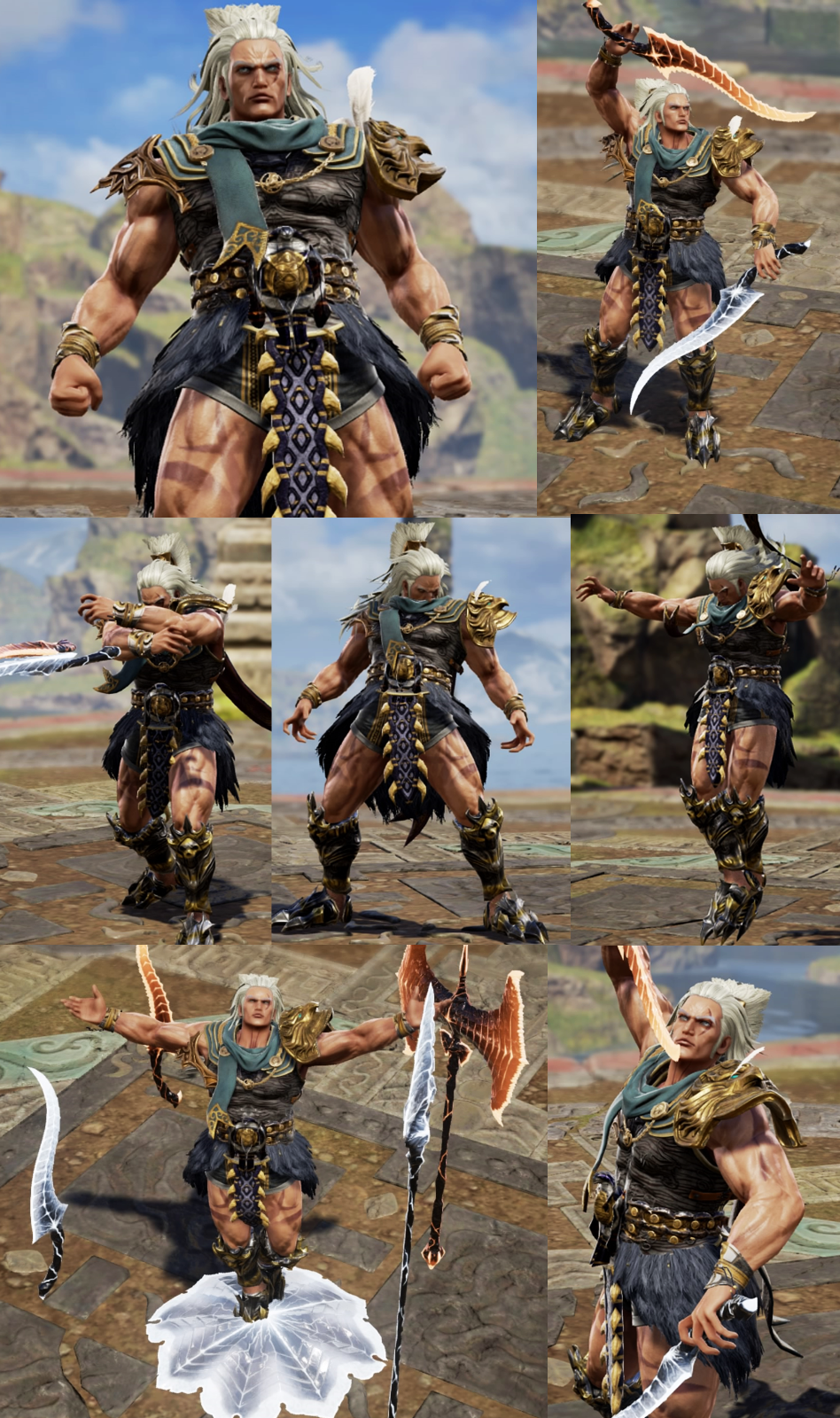 Rock: the idea of have it as a woolly rhino come from an old concept sketch they did for SC4 (is possible see it in the wiki linked), fun thing for that the legionary crest works both as fur of the mask and as stache/beard… and as some sort of spiky ponytail if I remove the mask!
Possible un-noticed detail is the huge cogwheel 3D piece on his right shoulder that blend with Kilik's Dvapara-Yuga to create some sort of rough protection piece of iron

Li Long: on this one I wanted to mix elements from various design he got, stronger influence was Soul Blade first design though, specially one the color scheme choice. The fake 2nd nunchaku is a single stick (done with pistol+voldo's horn) but with Maxi's dynamic fast animations it truly give the illusion he got it on motion

Edge Master: loved doing this one, the beard has been a pain in the ass though. First was done with legionary crest, then I changed piece for multiple reason. At some point he got even Haohmaru hair, but while looked awesome it gone unnecessary too far from the source… I love redesign characters that are half-ass made or had weak design being minor npc, but EM ever been a great design, so I respected it

Aeon: my fav version ever been SC3 one and I guess it shows lol, still he got influence from other incaarnations too. At some point he got Voldo’s guillotine to wink at Aeon’s double axe style, but did’nt felt fitting, so I gone for the original Sophi influence

Arthur: some may remember this CAS was already posted in the old thread, wich is correct. “New” Arthur is mostly the same (minor fix here and there), but new Haohmaru style gave him a gigantic boost in characterization and now can feel truly an alternative take (like he was in SC3) rather than a simple “Western Mitsurugi”

Yun Seong: I chosen to use SC2 Yun to fit best the time period of SC6. As ridiculous it sound do his bare-belly gi/jacket has been the most tricky part by far. Xianghua style is too manly for him, but is the closest I had. On general is the cas I’m less satisfied of this first group, wich considered how I despise yunsuck sounds about right lol

Dampierre: static pics don’t give him justice, with Amy’s style Le Bello fly like a butterfly and sting like a bee while dancing like a… I don’t know like what, but works silly great lol. Animations aside that style was given also because I liked the weapon, wich complement his crown-hat working as a scepter to complete his “king” theme. Last but not last kinda remind me “la canne” fighting style, something perfect for him that pretend to be a gentleman.

The thing I’m most proud of in this one funny is something 90% of people likely missed: the horns not only give him mustache, but on the other side they give him big 3d sideburns too

Final version is slighty different than in the pics: a sticker on right sleeve has been fixed, but specially a texture on his gloves (the jewel one) simulate him have hands full of rings too

Bangoo: I like this one even if I liked my SCV version too. In SCV i gone for “Future Bangoo” (from SC1 ending) in his early 20s with big axe, this round to keep timeline coherent I used as base the much younder Soul Blade playable one design… I will have give him that spear anyway , but cool detail it’s also Mina style just like in SB the secret char used to have

Han Myeong: this has been particular difficult to me to do, mostly due the temptation of completely redesign him to fight off a bit too simple front side. At some point it even had the back sticker (that is possible see in a pic, should have took a better shot to show it) on the chest, but after I chosen to place it on back like it was in SB. At the end I worked on small details, like his hairpiece took two 3D objects (the 2nd being almost invisible in pics) and having already used the “old guy” make up took some sticker work to turn that western looking face into a sharp asian master one

Algol: I love this one, but ironically does’nt look like in the pics on my PS4… or better, he looks the same, but I use more a version where he have 2B style (with “feather” swords having gold/bronze and steel colors) wich overall looks better on him. But for coherence Azwel style is more correct, and can have cool moments too. Final version got the right shoulder pad changed as position, so he move with the arm instead conflict
As mostly surely recognized i used SC4 first deign as source wich i ever found infinitely more interessing (both as design and as meaning, recreating a "forgotten culture") than the generic naked god we got in V

Hope you enjoyed this first round... next group will have 11 characters, 4 of wich females (looking at you, disappointed bodypillowwaifu crowd), coming in few days
If you noticed the absence of Setsuka and Hwang, is because i want to have faith in Season 2 to do the right thing


PS: PLS don't post pics. The thread will be already image-heavy itself and more than that we both know is the scum move, let's be nice :)
Last edited: Jun 1, 2020

Wow. I can't even choose a favorite because all of them are that good.

If you noticed the absence of Setsuka and Hwang, is because i want to have faith in Season 2 to do the right thing
Click to expand...

But how would you feel if, for whatever reason, the final S2 character ended up being Yun-seong instead? Not that I think that's actually going to happen, but I'm still a bit surprised that Project Soul went with Hwang when Yun-seong has more modern assets that would be easier for them to recycle, like his SC4 face model and moveset. I'm not against the idea of Hwang as DLC; in fact, I'm really excited to see him in a modern SC game. But it just feels so surreal to have him potentially coming back when PS has prioritized Yun-seong over him since SC2.

Honestly I want both of them back so we can have all three of the Koreans as main characters in the same game for the first time lol
Last edited: May 30, 2020

Dampierre using Amy’s style is something so GENIUS that I never would have thought of it.

I love all of them my friend @Gatsu! It is really cool idea to insert in every character his info from the SoulCalibur Wiki. You returned at last! BTW your Li-Long and Dampierre look like mine Li-Long and Damp. ,but yours are better. LOL! I'm waiting for the next group of 11 characters!

Welcome back. How’d you give Han Seong-Myeong that beard?

@Autumn it will be a tragedy. But SC6 did some right choices to fix recent history SC errors, i hope Hwang will be one more

@Kostas_Greece knowing your passion for SC universe i'm glad you liked this first round!
Yeah, the link to the Wiki add extra work to do, but i thought It will be nice to add context/source... specially considering that some are going to be very very minor chars that i redesigned almost completely lol

@annasoulcalibur if you want spoiler yourself their identity, in the old thread i posted a blurred pic that can give an hint on next entries, i think the first 4 girls are easy to guess :D

@SpellcraftQuill legionary crest did the trick. Usually used in that way Is too big to stay hidden inside the head, but Myeong particular haircut helped cover it

Superb, Gatsu: as always with your stuff insofar as I have seen, a fine attention to detail, and many creative uses of assets to get those effects. Welcome back to active production/sharing--I can't wait to see what is next!

Wow, each and every single one is so legit! You're spoiling us, Gatsu. Thank you so much for returning at last!
E

I never saw these characters in CaS with this precision ! Good job man, even the faces seem like the original character.

That Yun Seong is truly amazing!

Perfect work as usual... all of them! I'am so excited to see the other fighters

Well, short version as 8WR thought was cool automatically eliminate the entire post because 1 file* was too large apparently LOL

*Necrid, reposted it as gif, sorry for shit image quality, there's a link to the png btw

Now i'm splitting this Round 2 in two post, for Round 3 will probably wait we get into next page 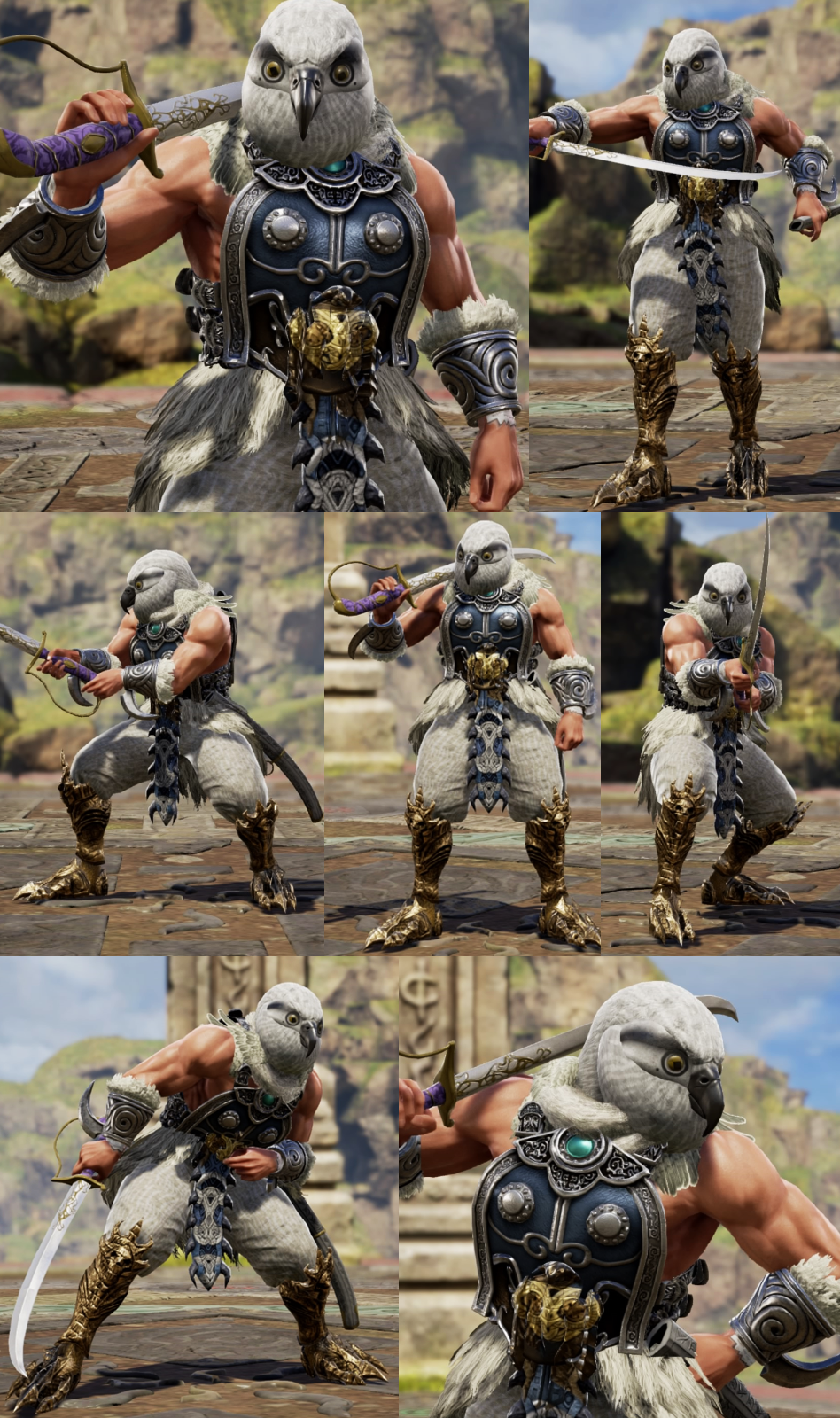 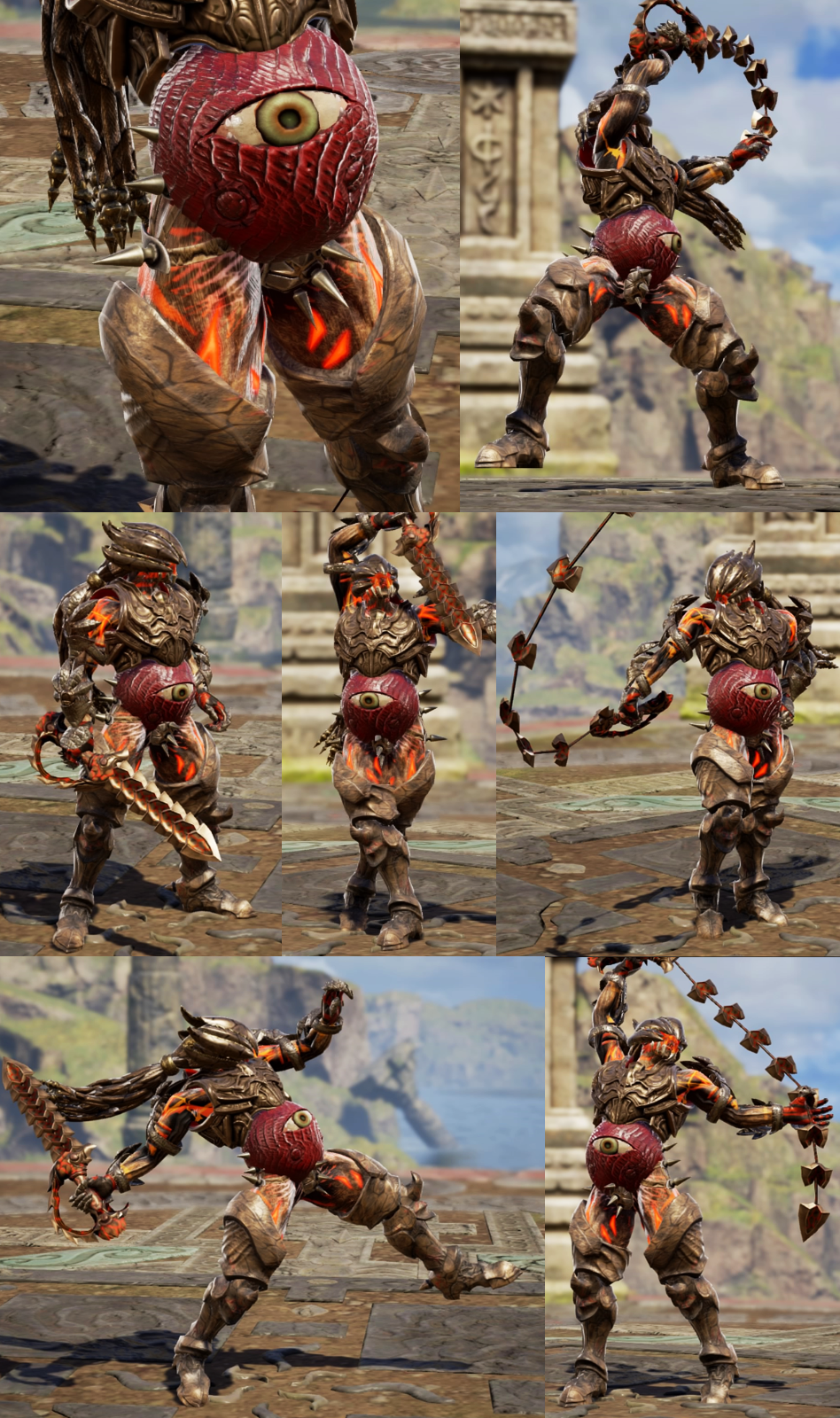 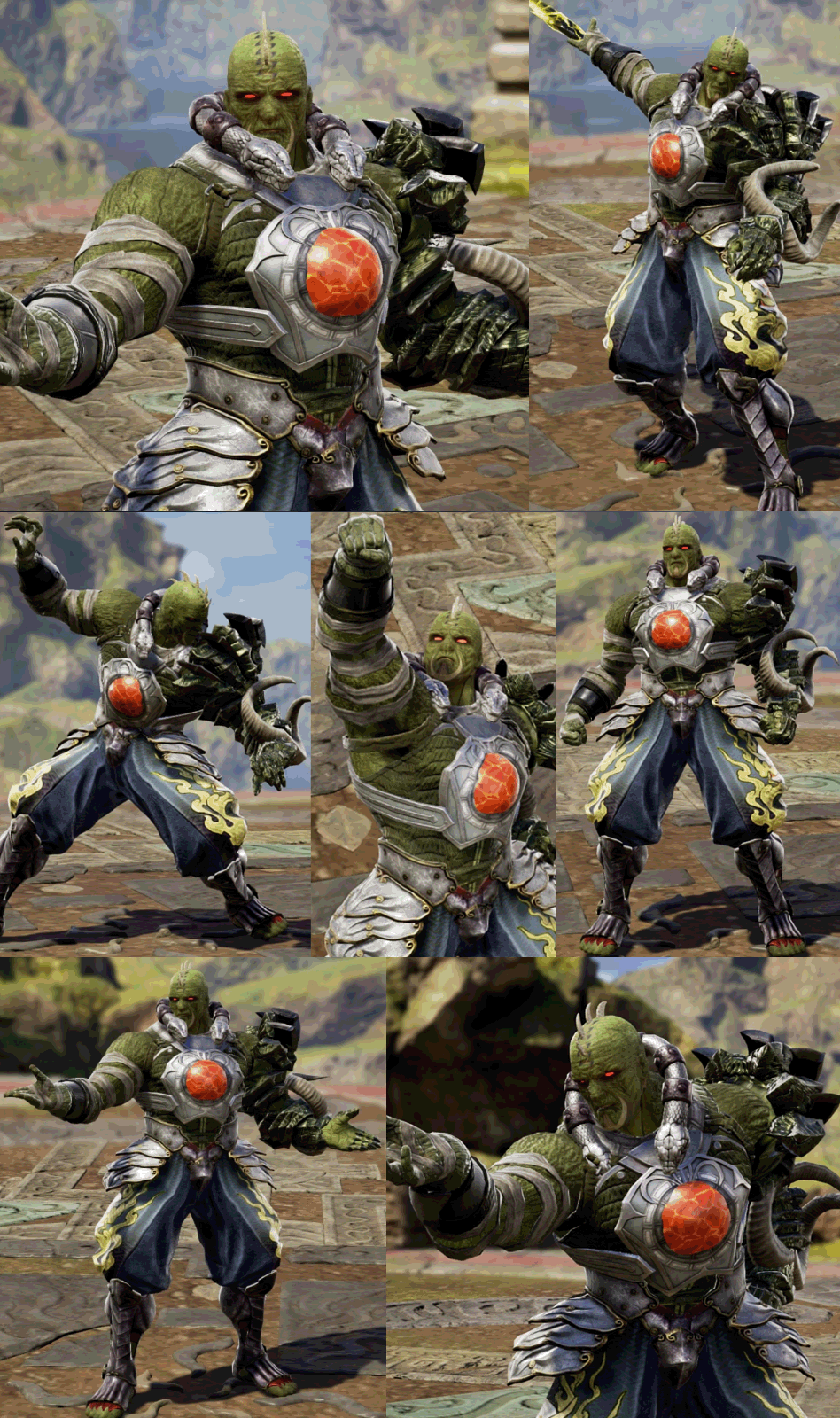 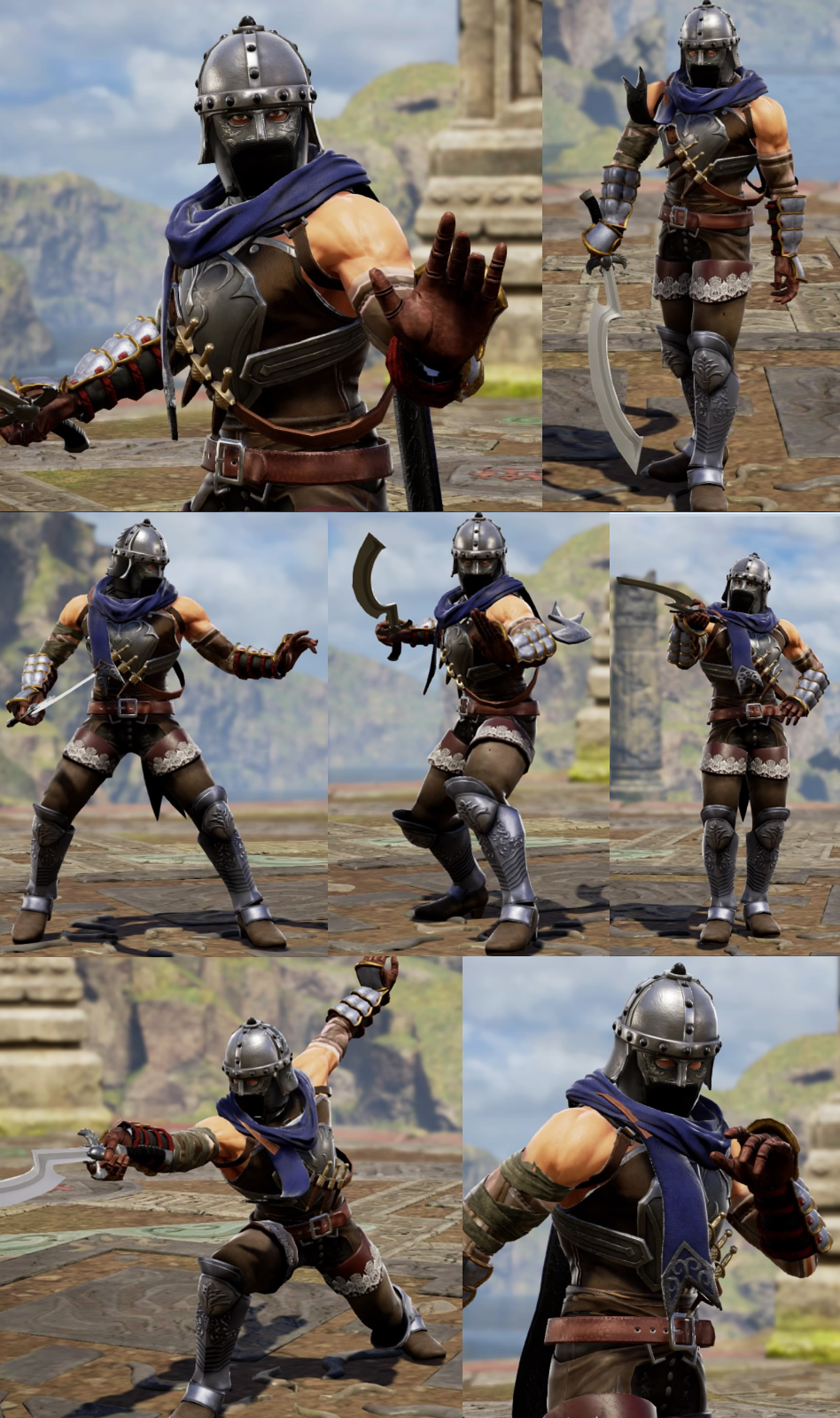 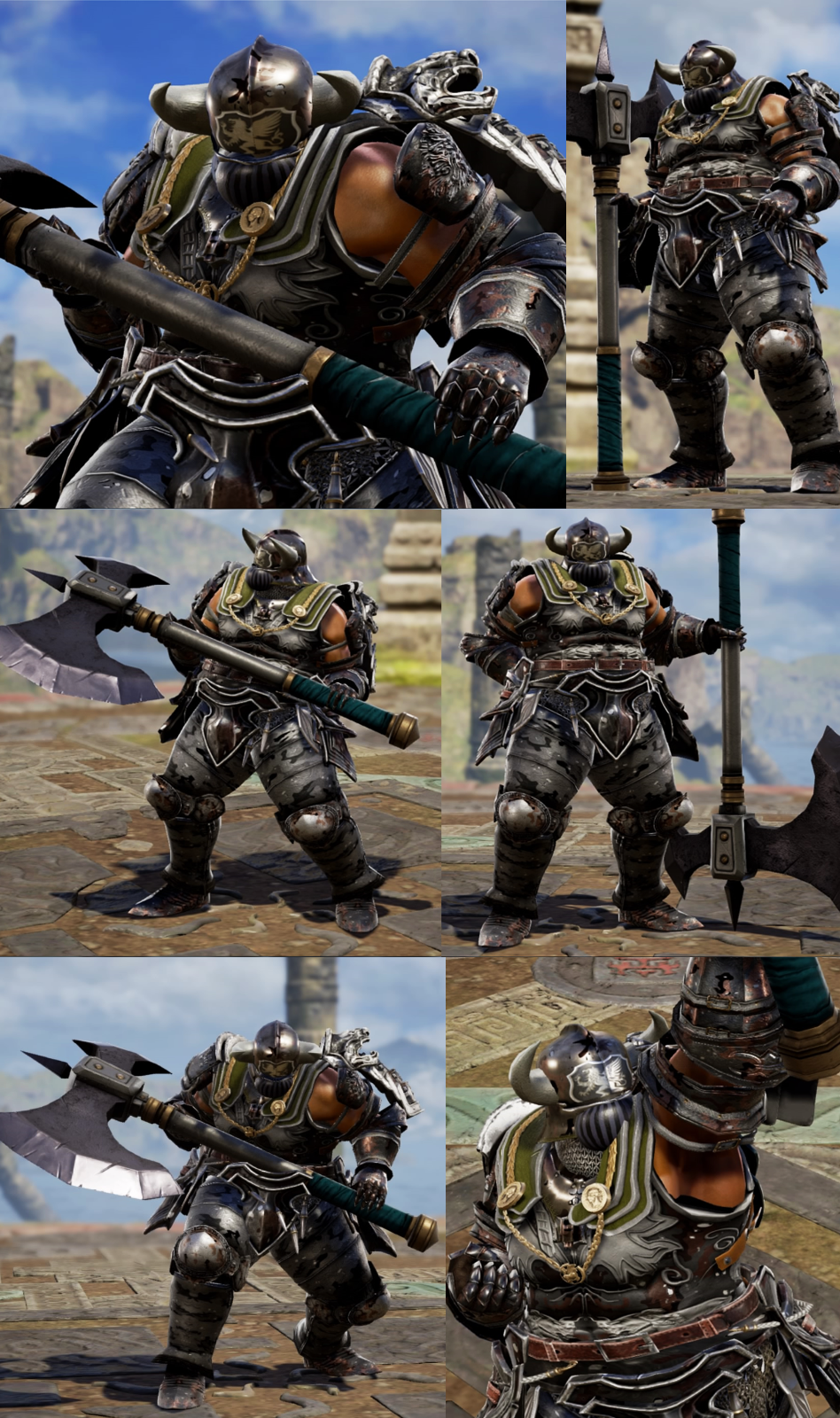 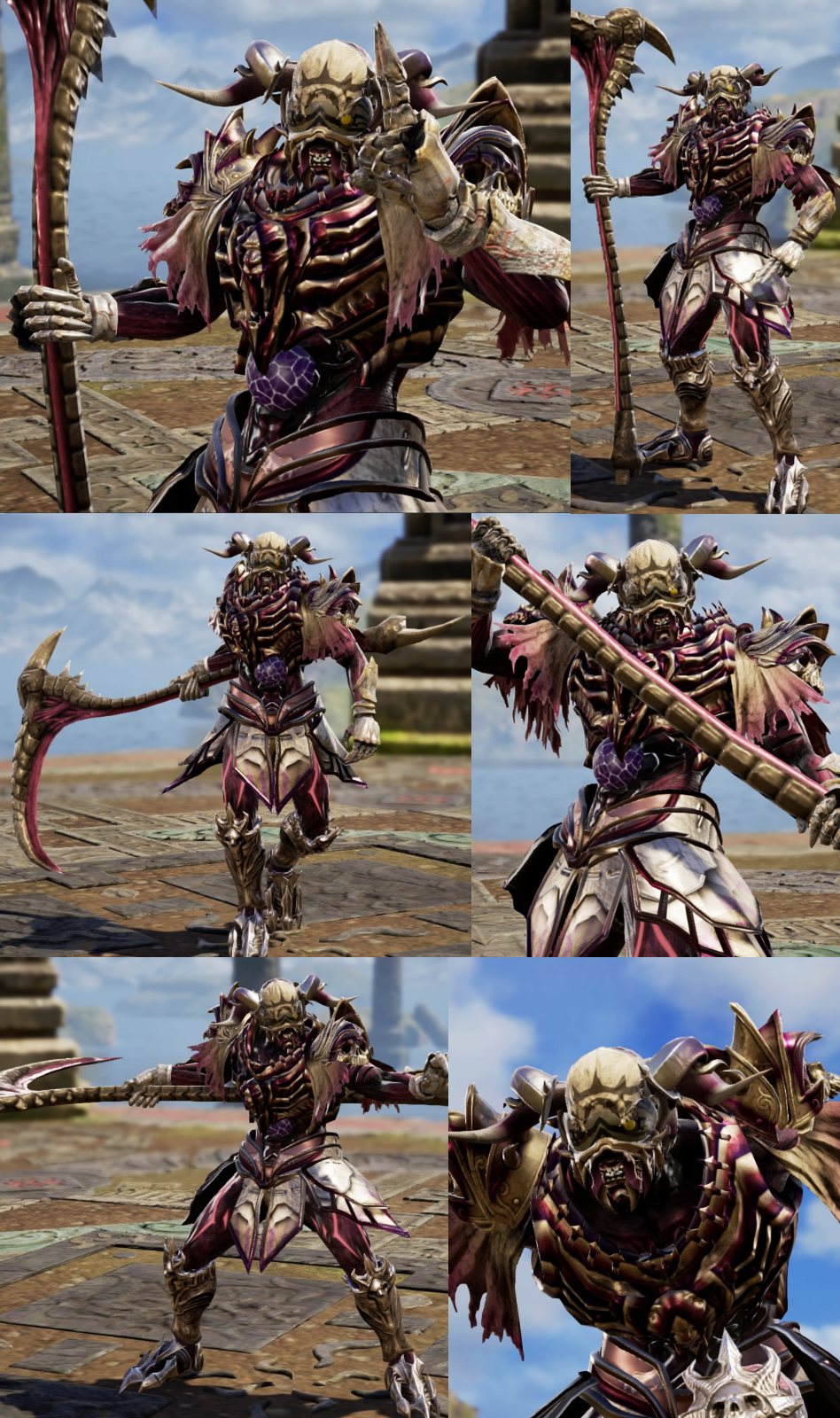 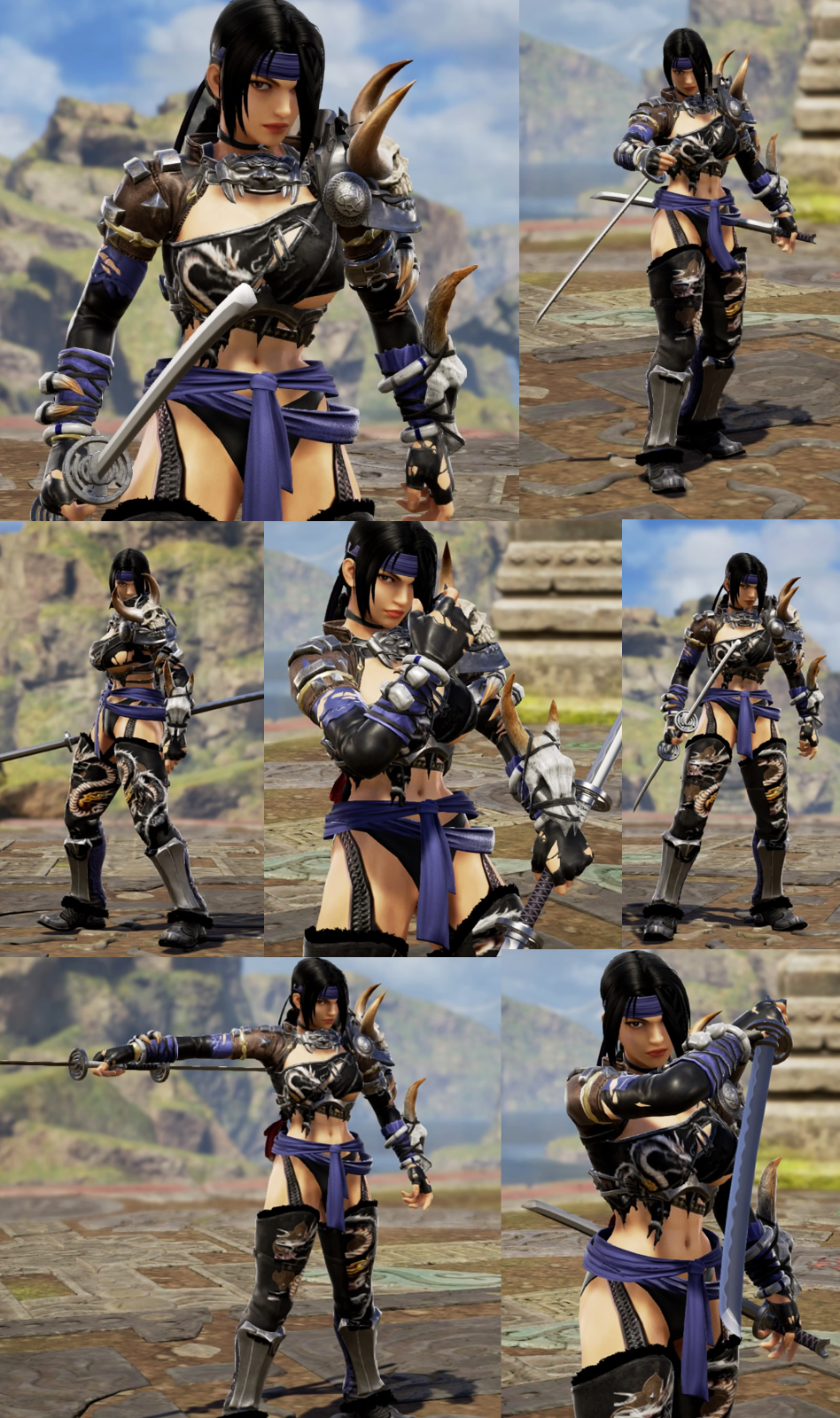 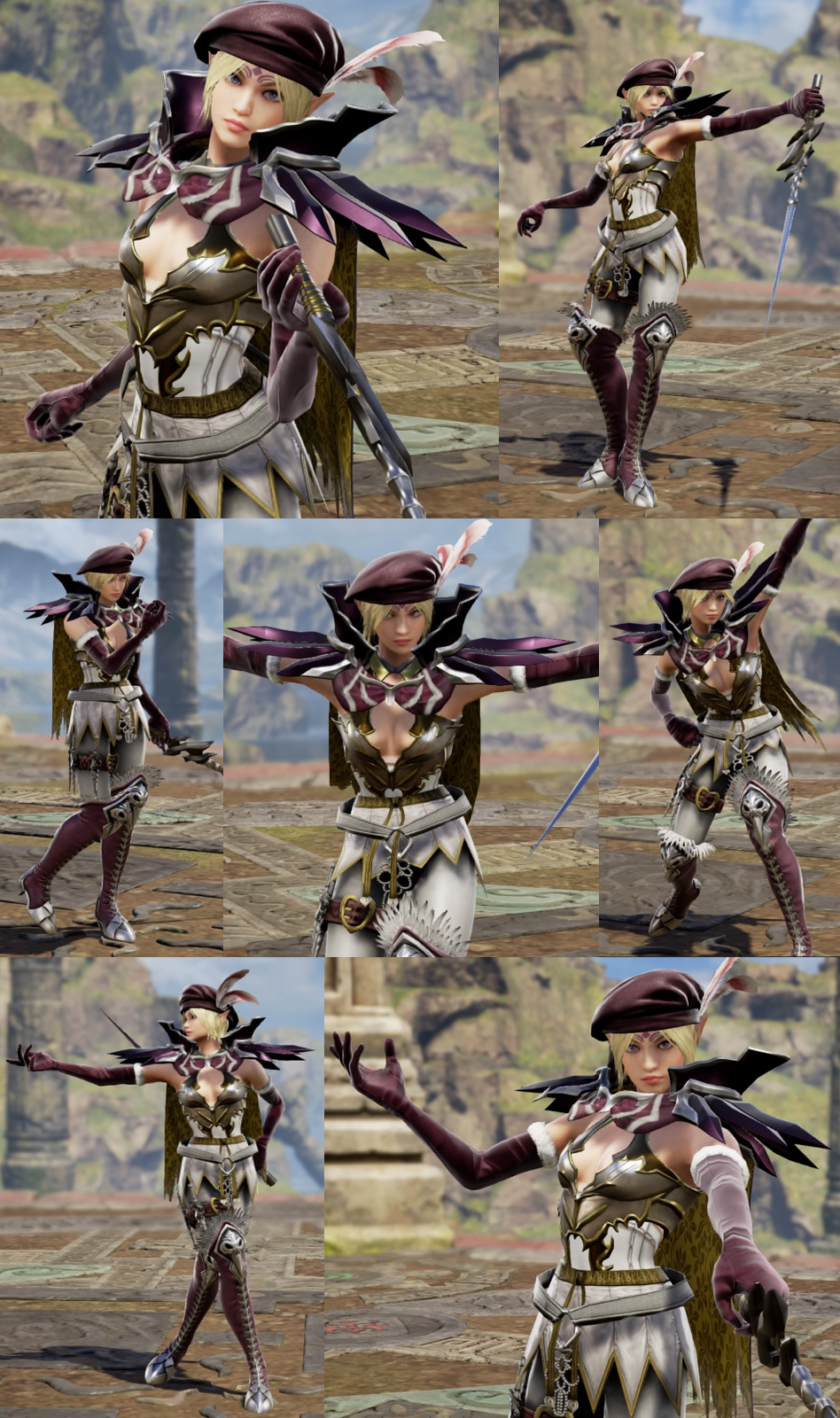 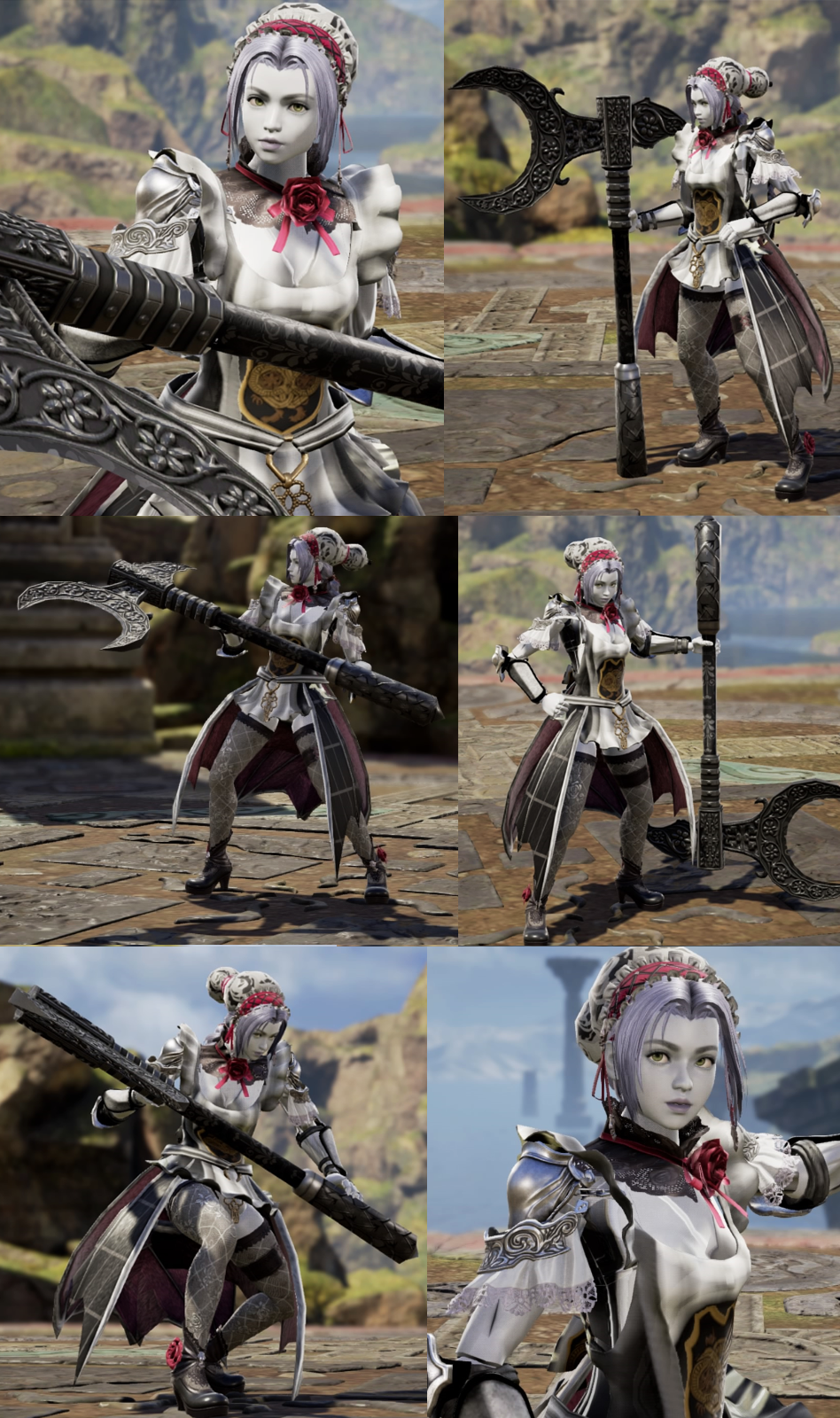 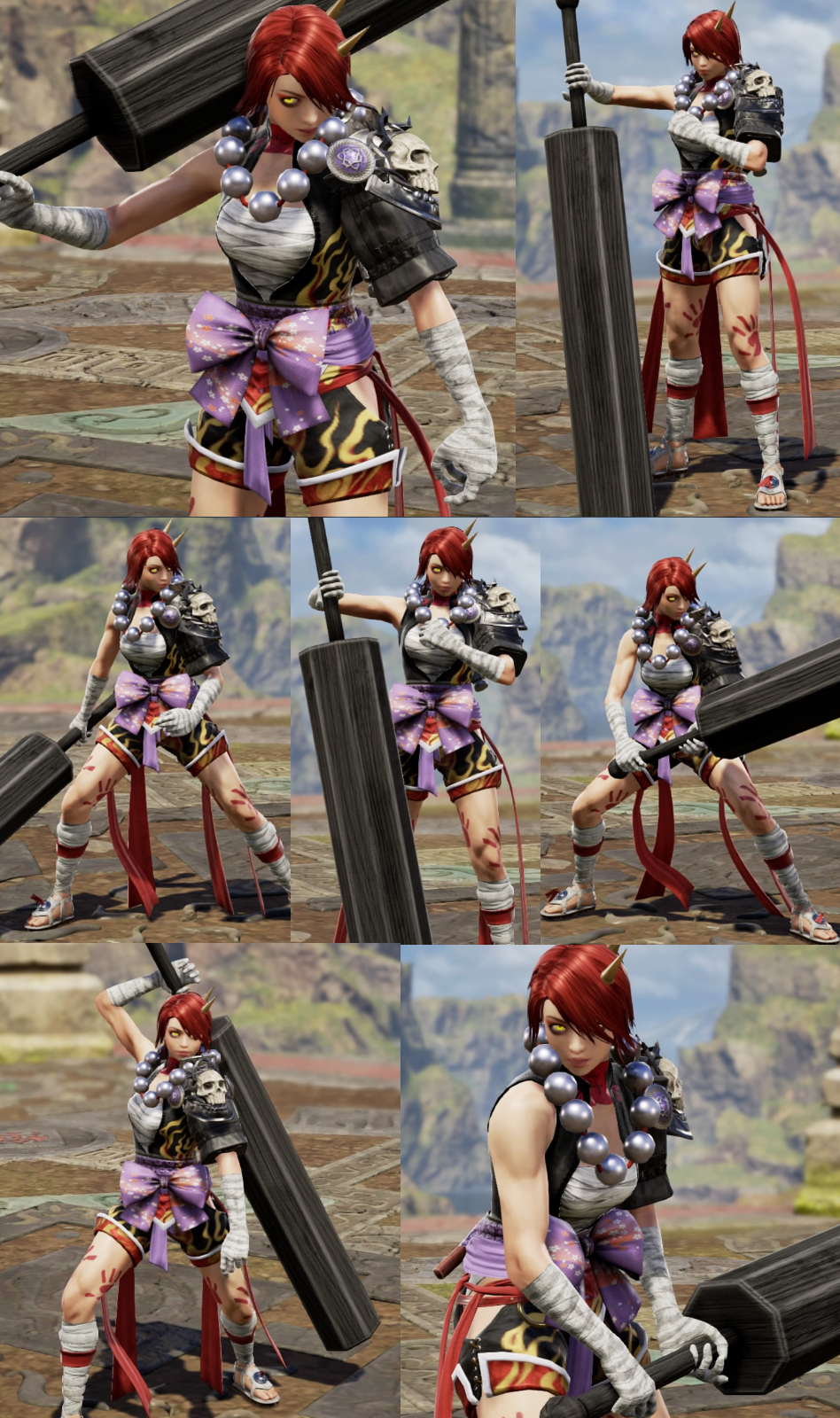 My gosh, those workarounds are mere perfection. You bring out unknown qualities in the ugliest CAS pieces and spice them up with ExEq I routinely skip because I was convinced that those couldn't be used in a remotely fashionable way. You prove me so wrong. And I hope to steal some of your boundless creativity for the future.

These are all quite wonderous, truly, but Olcadan is extra amazing in my eyes. Great blending of everything!

Great job! Your Necrid is much better than the original one hahaha

HappyColour said:
These are all quite wonderous, truly, but Olcadan is extra amazing in my eyes. Great blending of everything!
Click to expand...

I have to second that: a lot of these creations are much closer to the mark than one would expect from a custom recreation of a classic 2P, but that Olcadan is especially impressive in that fashion.