Assassinate said:
I might have missed it but are there not any more CAS unlockables in Libra?
Click to expand...

It appears not, which is actually pretty sad.

@DanteSC3 Wasn’t too fond of her but this hairstyle looks good on her. I’d suggest Benevolence Boots but they’ll prevent her from wearing the pants (I wanted to use them in place of Honor Boots for now too with my main female CaS but her tights become shorts.)

Maybe you could use Voldo’s eye spikes on the belt to simulate the knives?

The lighting hides the fact that the long sleeves are part of the scale suit.

Has anyone reached max level in Libra? Perhaps there are level based unlocks?

Von_Blackhardt said:
It appears not, which is actually pretty sad.
Click to expand...

That is sad. Hopefully the DLC brings good new stuff.

DanteSC3 said:
Here's my Conduit that I used in Libra of Souls:


I deliberately used Cassandra's SoulCalibur IV 2p hair, because I don't like the other pigtails options, as none of them feel like Low Pigtails. Swing Bob still works and fits the look, if you ask me. It really sucks that we're out Ring Pants and Honor Boots, and the collar scarf is also wrong, and, I didn't notice when the list of missing parts was posted, but no double dagger crossed belt is CRIMINAL. Oh well: 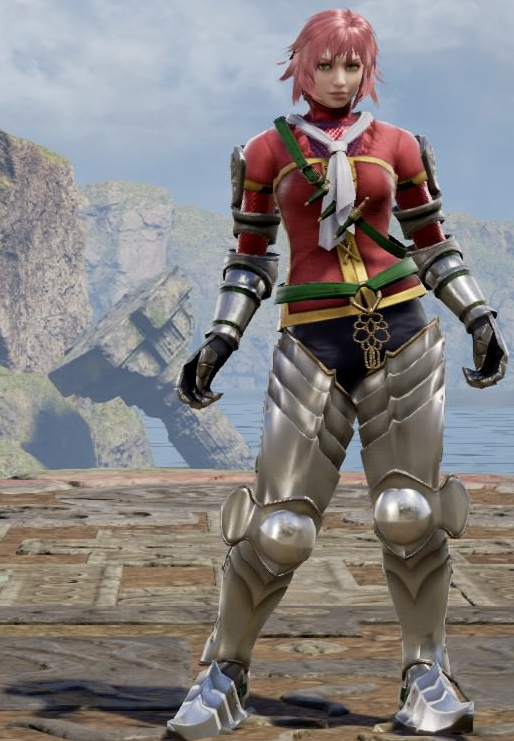 You could use Tiras hair right? They might work better.

There have been missing parts from SC3 i always wanted back and have never returned.

I was prepared to deal with a smaller roster but i really didnt think they would cut down customization this much. Everybody enjoys this aspect of the game.

I suppose if i think more on it though, that is exactly why "over 100" pieces are on DLC, because they know people will buy it. The previous games didnt offer anything close to that but then they didnt have to because a larger chunk was just freely given on the base game.

At this point I'm just getting angrier and angrier about the state of the CaS mode. Especially since I've always been shit at designing male characters and they got the best fucking equipment selection. Why can't female characters get awesome armor? Or some cool robe? Or a badass trenchcoat? Oh right. Because they gotta be sessy and show dem tiddies off.

I've seen plenty of cool designs with just the bare bones options. I can't wait to see what we'll get when DLC gives us more cool stuff to work with.

Surprised there aren’t many CaS topics. 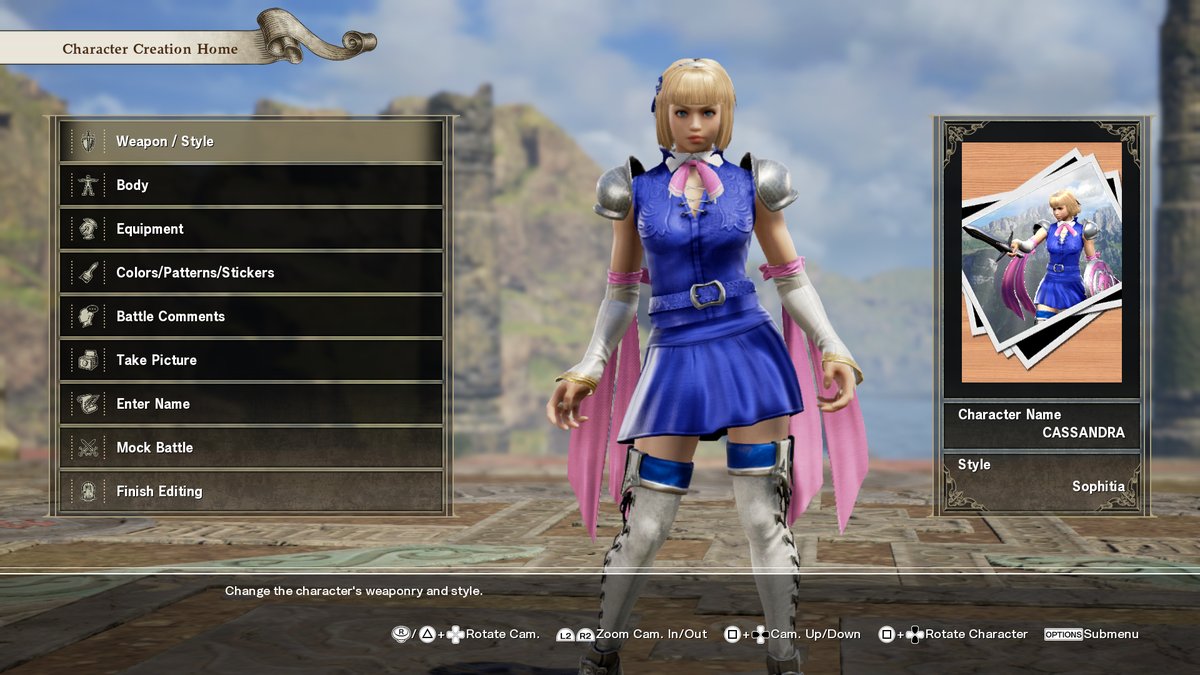 It’s amazing how we have good customizations cause there’s not many items to choose from. Seriously bamco, these dlc packs better be good cause we are lacking a loooot of stuff. Hope they come out soon.

Because truly creative people aren't limited by a small selection of items.

Just look through other users’ customs for inspiration. Be warned though. Some people are pricks. Just saying.

iliass said:
Yea let’s just admit you can’t do much with given items since the 1p customs can’t overlap most of each other too
Click to expand...

True, but you asked a question and that was the answer. Doesn't mean that you're wrong, but people will always find a way.

What if someone made a new thread where you can show off your original made characters instead of trying to make existing characters. I will also try making original characters later on my stream actually.

EDIT: nevermind, there is one already lol

REPROBEAN_CHILD said:
I assume with them, they get to keep their ears and tails, after their equipment is destroyed. I made two catgirls in SCV. It was annoying to see them lose those parts
Click to expand...

Yes. But the key words here are "bunny ears" vs "catgirls." Why is it only bunny ears?

SpellcraftQuill said:
@DanteSC3 Wasn’t too fond of her but this hairstyle looks good on her. I’d suggest Benevolence Boots but they’ll prevent her from wearing the pants (I wanted to use them in place of Honor Boots for now too with my main female CaS but her tights become shorts.)

Maybe you could use Voldo’s eye spikes on the belt to simulate the knives?

The lighting hides the fact that the long sleeves are part of the scale suit.
Click to expand...

I tried what I had available, and yeah, Benevolence Leg Guards would be nice if they allowed pants, alas. I was also going to maybe use Scorpion Greaves combined with some form of socks to simulate Honor Boots, but nothing really worked for that idea, because it was obvious that there weren't shoes and it looked bad.

As for the eye spikes, it was a thought, but they can't be angled properly nor made large enough to really seem believable. The horns not so much either.

The Scaled Suit also doubles as a simulation of her other equipment when broken, since it's tricolor, so it's neat:

The green socks are mostly a personal touch, since we don't know what she really wears under her boots, so I took her far more subtle other greens as a hint that she actually really does like the color green, and I think it contrasts well and looks good compared with the rest. They may be a touch bright, but the Scaled Suit is a touch shiny, so I think it works. 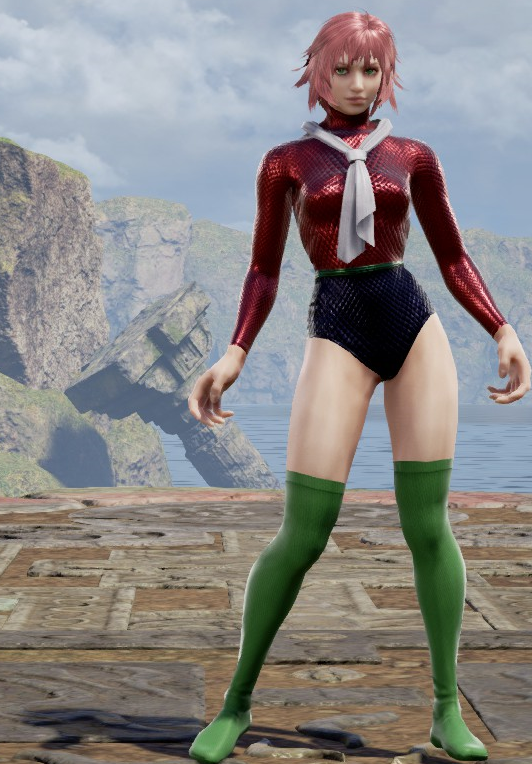 Ian said:
Has anyone reached max level in Libra? Perhaps there are level based unlocks?
Click to expand...

I've reached level 99 in Libra of Soul. There are no unlocks.

I tried both Tira's hair unbroken and broken and I'm not a fan of the look. I've seen people do the same with Luna before on SoulCalibur IV, using Tira's hair, and I don't think it's fitting, too wild and up for what Luna's looks like. There just really hasn't been a suitable replacement for Low Pigtails in the subsequent games, and I don't even know why they never brought them back in the first place, as they're not particularly elaborate. I had an OC in SoulCalibur III that also used them, and was sad that she couldn't be properly remade either.

I think too much blue? It's a good effort, but either should add in some white patterns/stickers/color contrast somehow or perhaps take from her new design and add some orange instead, or some gold accents, something. All the blue makes me think she's a really big fan of Mega Man.

Question about created characters used in a versus mode. Anyone know much effect the +2 or -2 for power and range you can get for changing the height/build of your character is? Range might be a bit more visible, but power for example, is it notable? If -2 power is a big downside for example, I guess would people not use really tall characters in online matches? Since tallest lowers power to -2, with range +2. But what does -2 mean specifically?

Also, a more general game question, I'm curious about power and health stats for the regular. How do Taki and Ivy's hitpoints or defense compare to Mitsurugi, or is everyone the same there? And would a created character using Mitsurugi's moves do the same damage as Mitsurugi ate base 0, or would +1 etc be where he is, etc. Just wonder what everybody is working with for health in particular, and if there's a way to know some of this behind-the-scenes stuff.

So if there really are no unlocks, how did the japanese player a few pages ago had bows on the pigtails of the Madoka characters? Could it be some exclusive japanese preorder thing? (they have a preorder swimsuit, and I think cadet suit)
You must log in or register to reply here.
Share:
Facebook Twitter Reddit Pinterest Tumblr WhatsApp Email Link