Since we already got a guest character as DLC, thanks to 2B, it's very likely that we'll be seeing two fan favorites returning as DLC next. Hopefully, it's Cassandra and Hwang or Yun-Seong, due to their popularity, for this season pass. If not, then there's always next season pass. =3

Sectus said:
I believe he's talking about this:
View attachment 54402
That's a 2D portrait you see during Libra of Soul. Personally, I feel this portrait lowers her chances of making it than anything else. This does not look like a work-in-progress for a 3D model for her. This looks like the development team took her SC4 model, added the rose object from SC6's character creator, and added rest of the details by drawing over the picture.
Click to expand...

That doesn't mean they cannot adapt her, maybe her SC6 model is just unfinished, they couldn't have her of all people without a portrait. And besides, considering how many animations and even voice lines are ripped from previous games, I wouldn't be surprised if the models weren't also updated versions for the new engine, which means that this may actually be a work in progress.

Macaulyn said:
That doesn't mean they cannot adapt her, maybe her SC6 model is just unfinished, they couldn't have her of all people without a portrait. And besides, considering how many animations and even voice lines are ripped from previous games, I wouldn't be surprised if the models weren't also updated versions for the new engine, which means that this may actually be a work in progress.
Click to expand...

Oh, I don't think this disproves her in any way. I think the fact she has a new design hugely increases her chances, while the fact she doesn't have a 3D model (as of the time they made Libra of Soul portraits) slightly lowers her chances.

It would be interesting to know when they finished various parts of the game. If the Libra of Soul portraits were finished before they started working on DLC characters, then those portraits don't mean much.

AMillionHP said:
I wonder if SC gets a season 2, we could expect that many characters?
Cassie, Setsuka, Hilde, Yun, Lizardman and Rock.
Click to expand...

I think Amy and Viola have more chances than Yun Seong & Rock.

Viola has a 0% chance to make it into SoulCalibur VI, of that I am certain. It would clash far too hard with what is established.

DanteSC3 said:
Zero Chance: anyone else from SoulCalibur V
Click to expand...

I know that's what he said, but I really doubt it, that was just masking, keeping it under wraps, not narrowing anything down, to keep us guessing. If we actually do get any characters from SoulCalibur V, I would be incredibly surprised. I honestly feel like even Li Long has a better chance.

Was he specifically talking about the current season pass, or future possible season passes?

If we are talking about just the current one, i really, REALLY dont see them forcing Viola into the game when there are still popular characters left who fit the timeline better.

Honestly Algol has a better shot than Viola or Zwei.

He isn't a popular character, he doesn't fit in the same timeline as Patroklos and the others. Bamco could put Olcadan & Elysium as DLC if they want.

Honestly, if we absolutely have to go by elimination, whether by similar gameplay gimmicks or story elements:

Anyway, as long as we don't end up with three characters with the same weapon like with SC5, I don't really care.

At this point I think Setsuka and Hwang would make the most people happy. If they do a season 2 they could do Cass and Amy, and whoever else is wanted.

@RagingGhost - Tira was not retconned in. Her backstory, as written, already set her up as defecting from Bird of Passage during the Evil Seed incident. You can say "retcon", but that's not really the right term to use, I don't think. Same with Zasalamel, their stories were written where they existed prior to their initial appearance, but they weren't created yet until SoulCalibur III, so when they reset the timeline in SoulCalibur VI, since we knew they existed before they were originally created as characters, it makes sense to see the origin stories that we could only read about before.

Talim is a special case, because she wasn't represented at all in SoulCalibur V (and neither was Zasalamel, part of why he returned too), but her story wasn't changed, since hers is the last on the timeline, it's just her quick origins before SoulCalibur II, nothing was changed to allow her inclusion. Cassandra would be the same, if she's in SoulCalibur VI, her story would just be her setup for SoulCalibur II, as she's not doing anything else in this timeline. Setsuka's timeline is a bit unclear without precise dates, so we might could see her training with her master before his injuries were dealt to him by Mitsurugi which would ultimately lead to his death which sets Setsuka's story up for SoulCalibur III, but it isn't really a certainty if those events are before or after SoulCalibur II, since Setsuka easily has the least story content of all of the characters.

But this is why I feel like Hwang and Amy have the highest chance, because they are foils and the other halves of two stories that we already have, in Seong Mi-na and Raphael. We would see the stories from their perspectives, with their motives and inner thoughts, and outcomes, which their endings would be extensions of the stories we already have. We could have Hwang's interactions with Han-myeong, being sent on his mission to track Mi-na, deciding to disguise himself, and after returning home, going back to the coast guard and setting up his next chapter where he could return for the next game. Amy, same thing, show her life as an orphan before Raphael, during, learning how to fight, playing her self-defense and training sessions, and maybe an event what was happening while Raphael's final chapter was happening from her perspective, to set up future events.

They really went out of their way to not show Hwang and Amy actually in battle, while they clearly had conflicts in both story modes. It's suspicious. 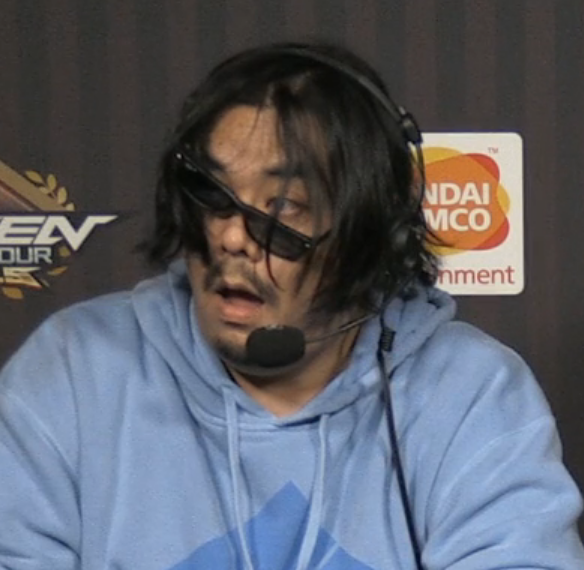 @DanteSC3 - Tira started in SC3 as being 17 years old, which meant that at the time of SC1, which SC6 uses as setting, she would've been 13. If that's not being retconned in, what is? At least, Zasalamel has the excuse of being a perma-reincarnating wizard. Hell, one could say he got active earlier in the new timeline because by the time the events of V happened, he couldn't obtain the swords for his goals anymore and chose to warn his past self.

RagingGhost said:
@DanteSC3 - Tira started in SC3 as being 17 years old, which meant that at the time of SC1, which SC6 uses as setting, she would've been 13. If that's not being retconned in, what is? At least, Zasalamel has the excuse of being a perma-reincarnating wizard. Hell, one could say he got active earlier in the new timeline because by the time the events of V happened, he couldn't obtain the swords for his goals anymore and chose to warn his past self.
Click to expand...

Per New Legends of Project Soul, Tira was a full-fledged assassin from nine years old, which was coincidentally the year 1583, where SoulBlade takes place. She was already active and a member of the Bird of Passage, following orders yet still being a chaotic personality person, same as we know her, even from a young age. The Evil Seed event happened, everyone went insane, and Tira set out on her own. She was adopted, killed her parents, and then wandered and killed on her own until discovering Soul Edge. All of this was known before SoulCalibur VI came out, it's just that SoulCalibur VI is the first time seeing it in-game. If it was a brand new story, I'd say that is being retconned in, but it's not, it's just us seeing it for the first time instead of just reading about it.

Zasalamel has existed since the ancient times, back with Algol and the creation of the swords. We already knew he was an immortal and reincarnator, but SoulCalibur VI gave us even more details about exactly how far back he goes. It's likely that the message he received from the future is from the end of SoulCalibur III, where he gets the swords and fails in his mission to die, so he tells himself in the past that that plan isn't going to work. He may still stubbornly try again, or try a different method with the same end result, for all we know the original failure we saw was the revised plan that also failed. We won't really know for sure how this will turn out until SoulCalibur VII, assuming we're continuing this retelling and covering 1590 and beyond.

@RagingGhost
Saying Algol and Azwel are the same is quite a stretch. They have similarities with their powers and in how they summon their weapons but the end result and how they fight is quite different. The only true copied weapon would be a shield. Algol has no axe, spear, or even a sword of any kind. He makes a lot of "arm blades" and "cannons". He is very straight-forward and physical with his fighting. Azwel levitates all his weapons and barely ever directly touches or swings a single thing.

Dismissing Cassandra, Lizardman, Amy or Rock on the basis of similarity would make more sense. Popularity is the only thing stopping Algol and i'll admit it means his chances look very low unless we'll get a third season. Especially if season 1 is guests. 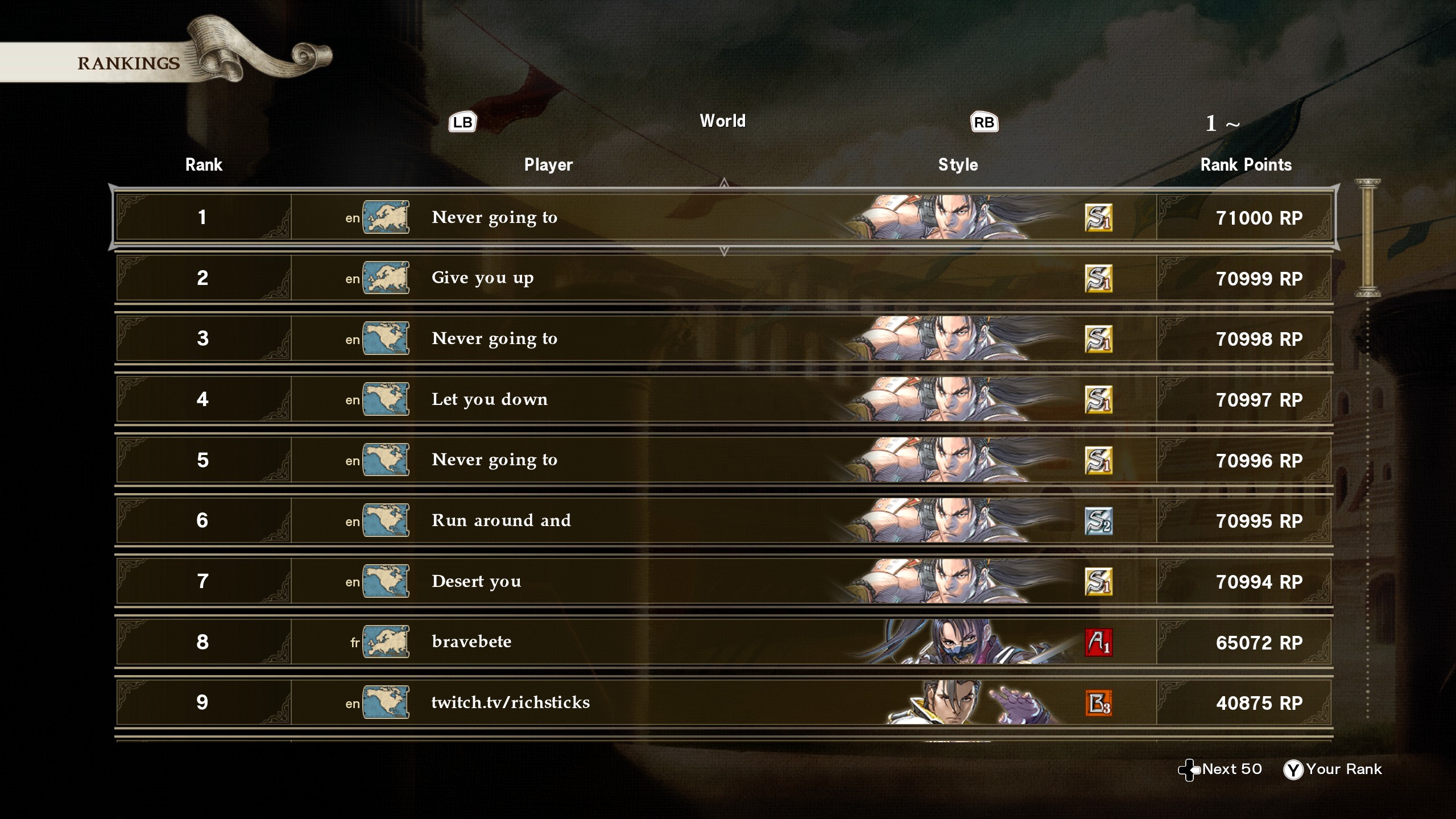 What the fuck LOL